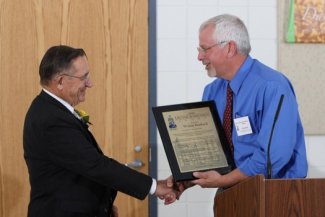 Before joining SDSU, Knabach worked for Northwestern Public Service Company in Yankton and Huron from 1949 to 1957, which provided him numerous practical applications to share with his students.

In the photo, Knabach (left) was honored by members of the CPSS in 2009, receiving the first CPSS Lifetime Achievement Award presented to him by Mike Sydow of NorthWestern Energy, one of Wayne’s students.

Because of his extensive work in the power industry, the Center for Power Systems Studies annually presents the Wayne E. Knabach Award for Excellence in Power to an engineer and/or company that has had a great impact in the power community.

Past Wayne E. Knabach Awardees for Excellence in Power

Below is information on this award.