Arthur Amiotte (b. 1942) was born on the Pine Ridge Reservation. He credits his work in tribal arts to living on the reservation and being with his family members as they participated in traditional art forms and ceremonies. Dakota artist Oscar Howe inspired him to utilize his Lakota culture in his artworks. Amiotte is a highly sought after author and lecturer on Native American arts and contemporary American Indian art and the recipient of many awards, including a Getty Foundation Grant; a Bush Leadership Fellowship; the South Dakota Governor’s Award for Outstanding Creative Achievement in Arts; and the Lifetime Achievement Award as Artist and Scholar from the Native American Art Studies Association. His career as one of the most influential artists portraying Lakota life, thought and philosophy in the Northern Plains Region spans four decades.

In the summers of 2013 and 2014, the South Dakota Art Museum hosted a workshop developed by the Center for American Indian Research and Native Studies (CAIRNS). The workshop offered participants the opportunity to learn about Lakota history and culture through presentations, readings and discussions, as well as hands-on experiences with Lakota artworks and artifacts from the museum’s collections. 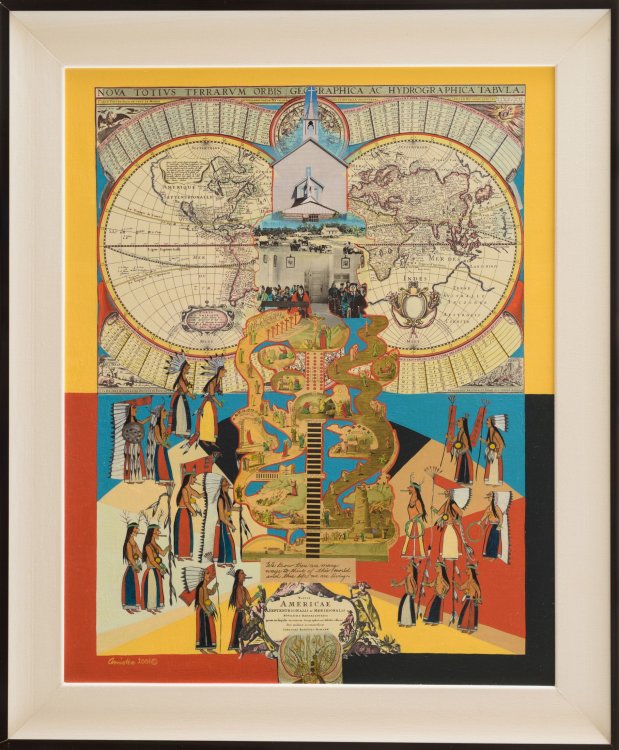 Amiotte’s Different Worlds was included in Lakota Arts and Identities, an exhibit that was developed from the CAIRNS workshop. At that time, the artist offered the following statement:

“My painting draws its content from Sioux legends, lore and religion, learned from my grandparents, their friends and their neighbors while I was a child on the Pine Ridge Indian Reservation of South Dakota. I attempt to portray the world of the Indian minds as it looks at life from a distinct cultural cosmos different from that of the dominant white culture. I try to say visually what I believe my forefathers may have tried to say in answer to such questions as: Who are you? Where have you come from? What do you believe? I say ‘what they may have tried to say’ because they were and are one of the most misunderstood people in the United States. Perhaps if they had been understood when the time was most crucial, history would have been more just.”