The South Dakota Art Museum's S.D. Nelson Collection was made possible by S.D. Nelson's generous gift of the entire body of works displayed in the 2019 exhibition, S.D. Nelson: Sharing My Vision. This was the first time Nelson's works had been on display at the museum. While working with the museum's staff to compile this selection of original artworks spanning his career, Nelson offered to donate the entire exhibit to the museum's permanent collection.

“We are so honored that S.D. Nelson would entrust these works to us and as stewards of the art treasures of South Dakota, we will preserve and share them with visitors, students and researchers for the years to come,” said Lynn Verschoor, then director of the South Dakota Art Museum.

Jodi Lundgren, South Dakota Art Museum curator of exhibitions, displayed the Nelson exhibit at the same time as A Life’s Work: Paul Goble Illustrations of American Indian Stories in order to highlight the connections between Paul Goble and S.D. Nelson’s artwork and books.

“S.D. Nelson is an important Lakota artist and author who was inspired by Paul Goble’s illustrations and retellings of traditional American Indian stories in children’s books,” Lundgren said. “Nelson brings his own style and life experience to his books and art and we’re excited to share that with our visitors. Nelson’s fluid style and traditional Native American imagery combines movement, color and form into a visual celebration of life."

An award-winning author and illustrator, Nelson is a member of the Standing Rock Sioux Tribe in North and South Dakota. His paintings offer a fresh contemporary interpretation of traditional Lakota images. Nelson creates ledger drawings in ink and colored pencil and paintings with acrylics, which he brushes, sponges, splatters and sprays. In addition to this work, he has painted extensively on animal skins and bone and has crafted traditional rawhide drums and leather beadwork.

After graduating in 1968 from North High School in Fargo, ND, Nelson went on to earn a B.S. in Art from Minnesota State University at Moorhead. He taught art for a year in the Wahpeton public schools in North Dakota before going on to teach for twenty-seven years in Flagstaff, AZ. He is a 2012 inductee of the North High School Hall of Fame.

“On the prairies of Dakota there is only earth and sky. All is grass and clouds, forever. It is a land of brutal beauty, where terrible battles were fought hand to hand, and where at twilight the song of Sister Meadowlark will make your heart cry. As a boy, my mother, who was a quarter-blood Sioux Indian, told me traditional stories about Coyote, the Trickster and Iktomi, the Spider. I learned that the stars were the spirits of my ancestors, that my great-great grandfather, Flying Cloud, still rode his snorting horse along the White Road of the Milky Way. If I looked carefully, Mom said, I would see the Great Bear and the Star That Did Not Turn—the North Star. She told me the Life Force, or the Great Mystery, is named Wakan Tanka, that all of creation, the four-legged beings, the tall standing trees, even the wind has a spirit and is alive.

I remember one particular summer night… cricket song filled my ears. Then, shimmering overhead, the Northern Lights came dancing, pale green at first, then in ethereal robes of red and gold; spiraling ever upward; colors vanishing, only to reappear. Although I was staring directly into the heavens, from the corner of my eye, I saw something. The sacred something that Lakota People believe is behind all things. I was only a boy, but I was seeing in a Wakan manner, in a sacred way.

My mother taught me at an early age to see the world with both the curious eyes of a child and the wistful eyes of an old man. I learned that morning is the most beautiful time. For at dawn the world is born anew. It is the time when the little flying creatures make their song. The little green growing things are covered in precious dewdrops. At dawn, all is golden. All is beautiful.

I have not forgotten those long ago teachings… ‘Walk with your vision in your heart.’ The boy with the eyes of an artist was given a gift – to see things in a Wakan manner. In turn, I became a painter and a teller of stories.” 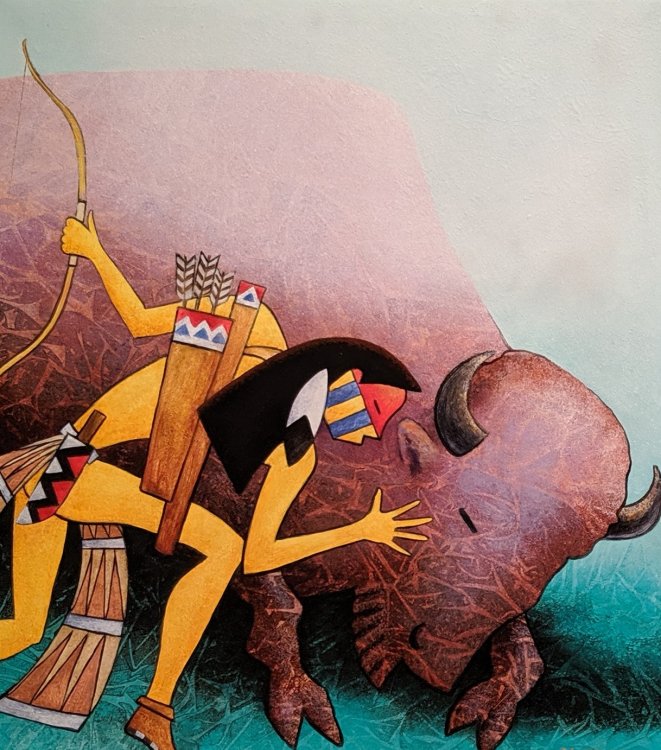 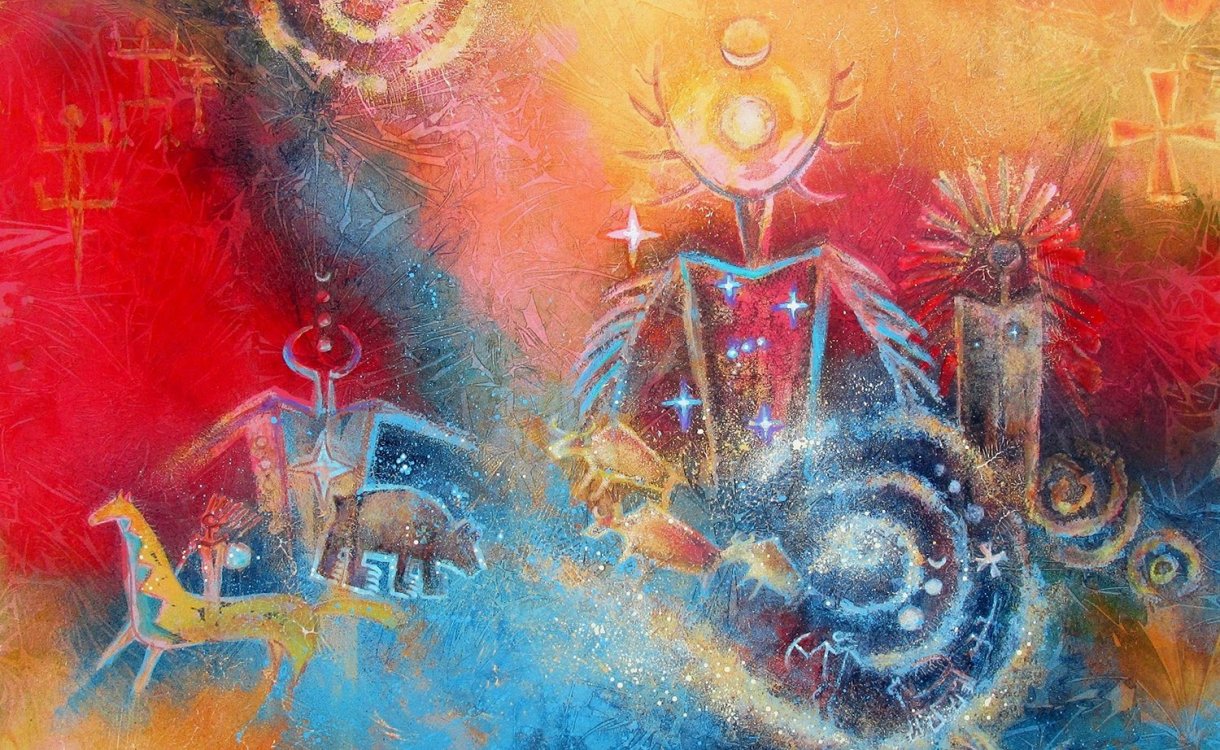 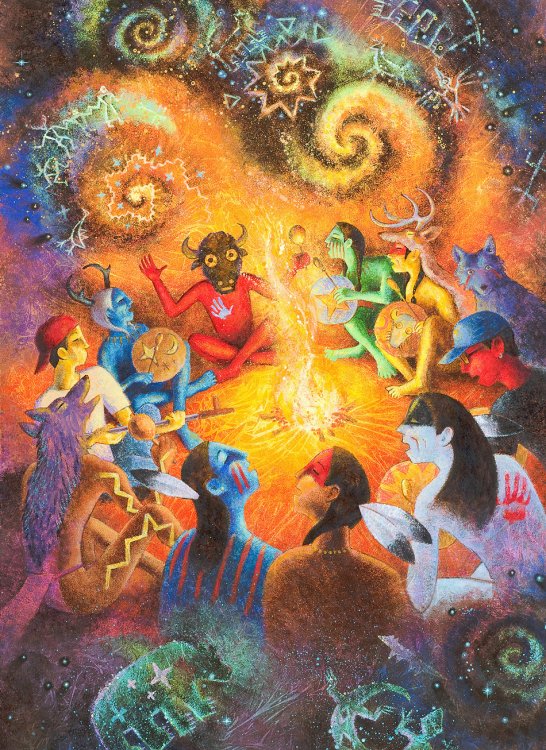 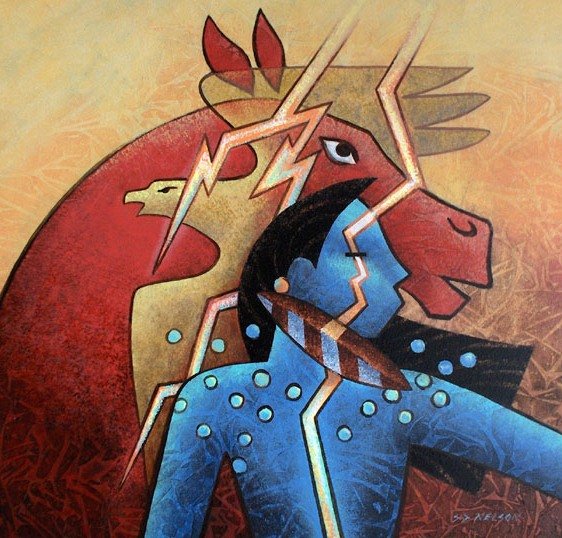 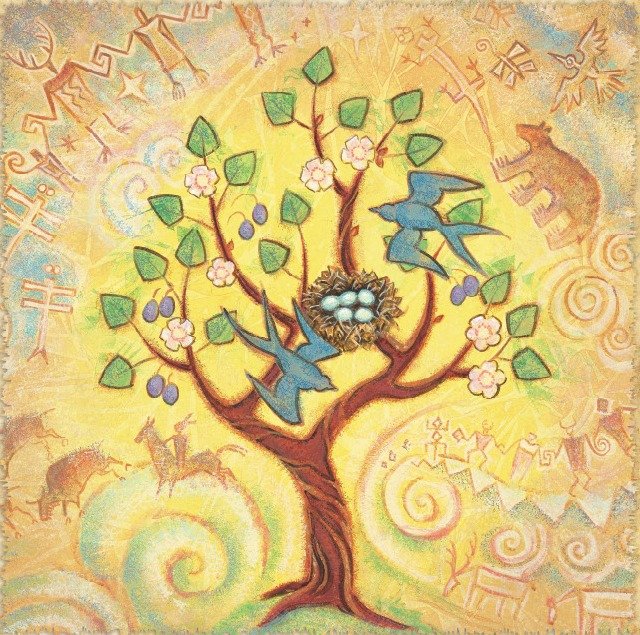 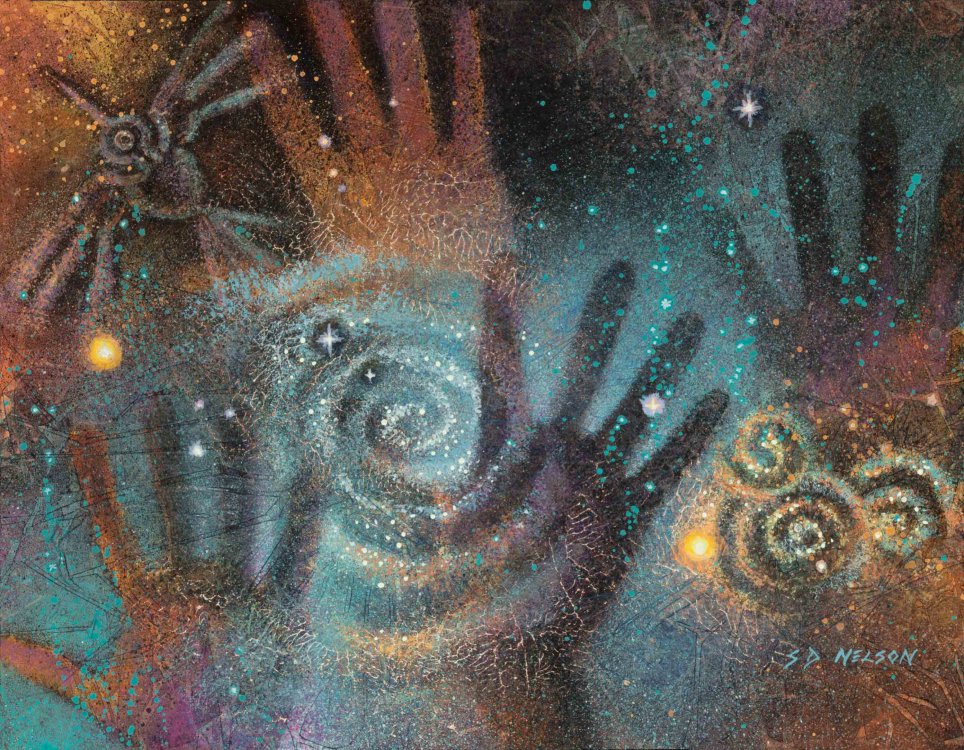