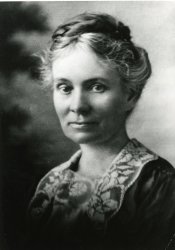 In 2015, the South Dakota Art Museum received a grant from the Institute of Museum and Library Services for $22,003 to treat nine of Caldwell's works that needed conservation treatment. Read more about the grant.

For more than a third of a century, Ada Caldwell labored to show the young minds in her classes how a few rare spirits have been able to work upon the chaotic materials of human experience and transmute them into patterns of truth and beauty. Such a rare spirit was she herself; and into such a pattern, true and beautiful, did she fashion her own life. - Madison C. Bates

Ada Bertha Caldwell was born in Bryan, Ohio, on September 28, 1869. She was the youngest of three children born to Walter and Emily (MacGowan) Caldwell. The family moved to Nebraska, settling in Lincoln around 1876. Caldwell attended the University of Nebraska for a year before studying at the School of the Art Institute of Chicago from 1893 to 1897. She taught for a year at Yankton College in South Dakota and then accepted a position as Professor of Industrial Art at South Dakota Agricultural College (now South Dakota State University). She served as head of the Art Department from 1899 to 1936, passing away in Brookings on November 8, 1938.

Caldwell believed that one could not be both a great artist and a great teacher so she committed herself to teaching rather than to recognition for her own artworks. She believed a teacher must keep up with current developments to know their subject well so she spent all but three summers studying across the country, returning “each autumn eager to share her growing expertise.” Caldwell took a leave of absence to study at the Teachers College at Columbia University in New York in 1903 – 1904. She also studied at the Pratt Institute, the Chase School of Art and the Art Students League in New York. Caldwell studied under landscape masters John F. Carlson, R.W. Woiceske and Birger Sandzén. She spent the summer of 1914 in the great art galleries and museums of Europe. Caldwell was a member of the Western Art Association and the American Federation of Art.

Caldwell was a civilizing force on campus. She was highly influential in establishing the culture and envisioning a future for the college at a foundational time in its history. She tirelessly served the campus, city and state with selfless grace. Caldwell designed Coolidge Sylvan Theatre, the Art Department in the Administration Building and contributed to the design of Wenona Hall. She envisioned the Sylvan Theater, a campus grove and a student union long before those dreams were realized. She dreamt of a city art association and recreation center for children. She also dreamt of creating a landscape painting school in the state and an art pottery in the Black Hills.

Caldwell established the college’s Art Club in 1900, which met to discuss artists and art movements and also curated and hosted an annual costume party, picnic and traveling art exhibition. In addition to managing the Art Department, Caldwell had charge over all women students as Dean of Women from 1907 – 1917. She served as supervisor for women students in Wenona Hall from 1909 – 1911 and again from 1914 – 1917, establishing many of the principles of dormitory procedure. She was active in the Women’s Club of Brookings, a charter member and first Vice-President of the Faculty Women's Club and advisor to the Art Committee of the South Dakota General Federation of Women's Clubs. She advised the college’s YWCA, provided leadership in organizing a city YWCA and assisted in starting a Business Girls’ Club. She taught workshops and gave talks on art to many local groups, including an Association of American University Women art history class for the women of Brookings. She assisted agricultural extension staff in stimulating an interest in handicrafts amongst farm women in the state through their Farm and Home programs and created art exhibitions for their Farm and Home Week.

Caldwell’s contributions have been recognized through several dedications since her passing. The 1939 Jack Rabbit yearbook was dedicated to her because of her “service to the State College and its students, her leadership in cultural movements in the City of Brookings and the State of South Dakota, and because of the type of teacher she exemplified.” Harvey Dunn painted a portrait of her for the dedication. It is now in the museum’s collections. About the portrait, he said, “Miss Caldwell meant so much to me that anything I might do would seem inadequate.” A Rembrandt etching was placed in dedication to her memory at the Brookings City Library by Chapter P of P.E.O. In 1940 the college hosted a memorial exhibition of her artworks. In 1963 a memorial plaque was dedicated to her at Coolidge Sylvan Theatre. Most recently, Caldwell Hall was named in her honor in 2005. 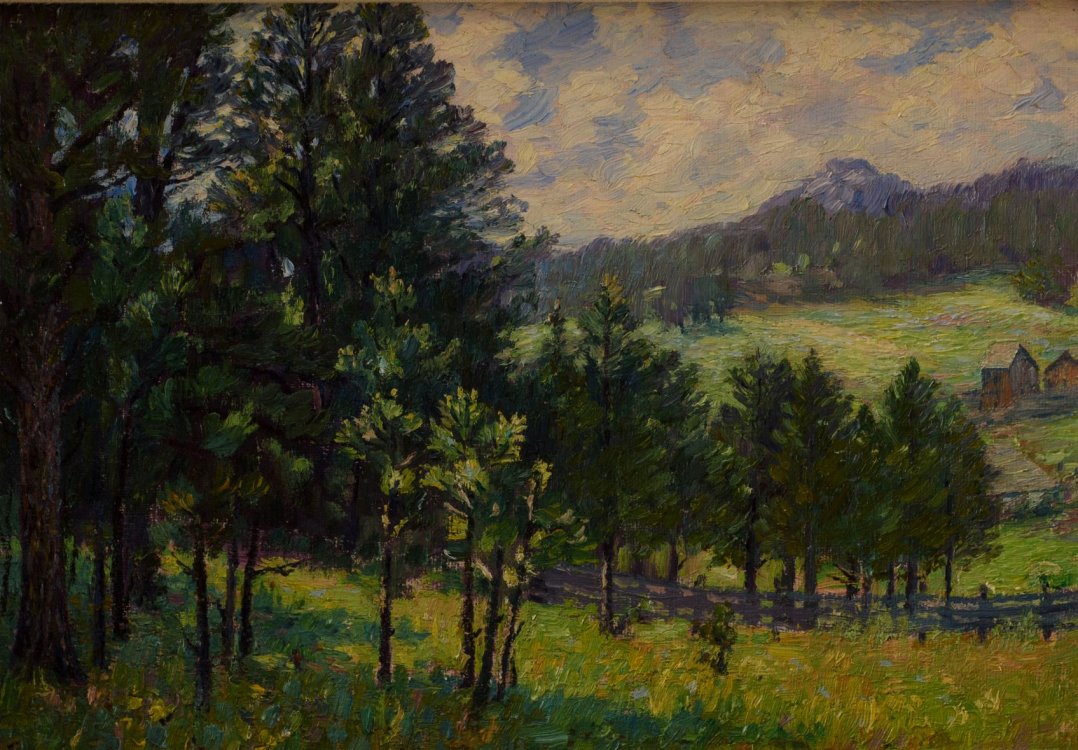 Caldwell was intimately acquainted with the Black Hills of South Dakota. During summer vacations she frequented Rapid City, Deadwood and Hot Springs. In 2016, the United States Board on Geographic Names changed the name of the landmark to Black Elk Peak, in honor of the Oglala Lakota holy man. 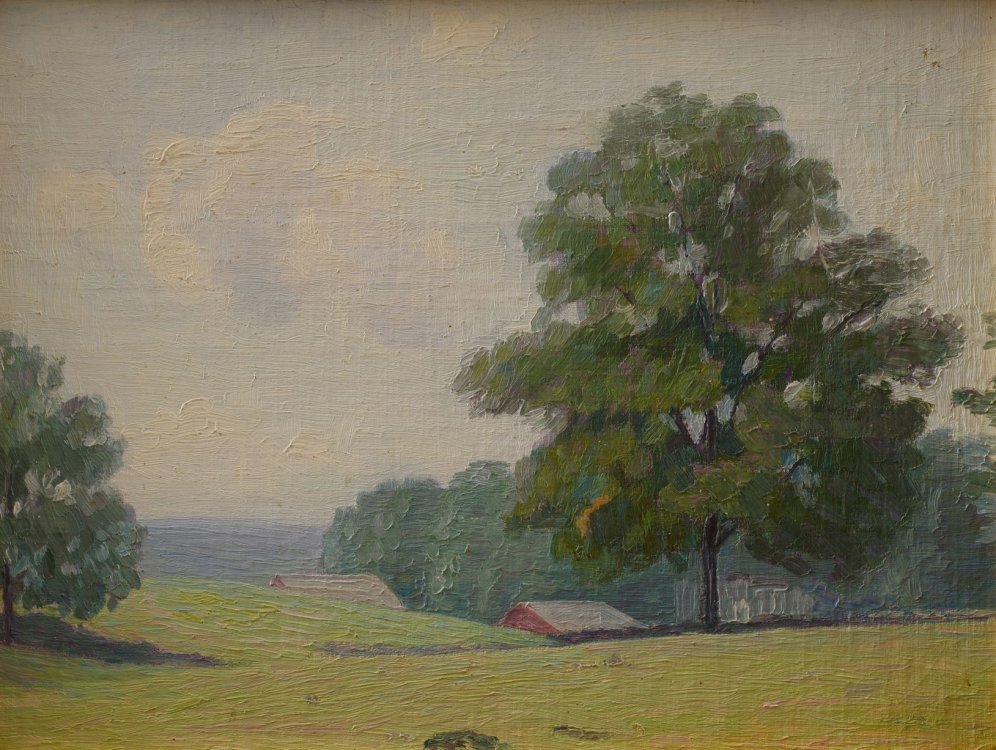 Caldwell studied at the Art Students League of New York, Woodstock School of Art during the summers of 1911 and 1912. Her instructor, John F. Carlson, was an influential teacher of landscape painting in the early twentieth century. 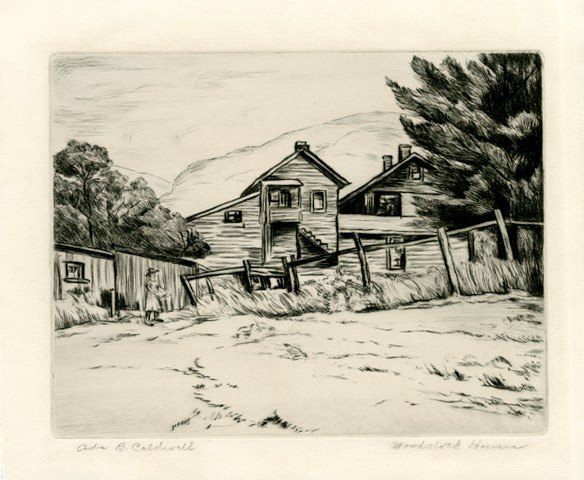 Caldwell studied landscape painting in Woodstock, New York in the early 1910s. Around 1930 she returned to the area to study etching under Ronau Woiceske. By this later period, she was adept in many art forms, adding etching to her abilities at painting, drawing, woodcuts, bookbinding, weaving, and leather, reed and metal work. 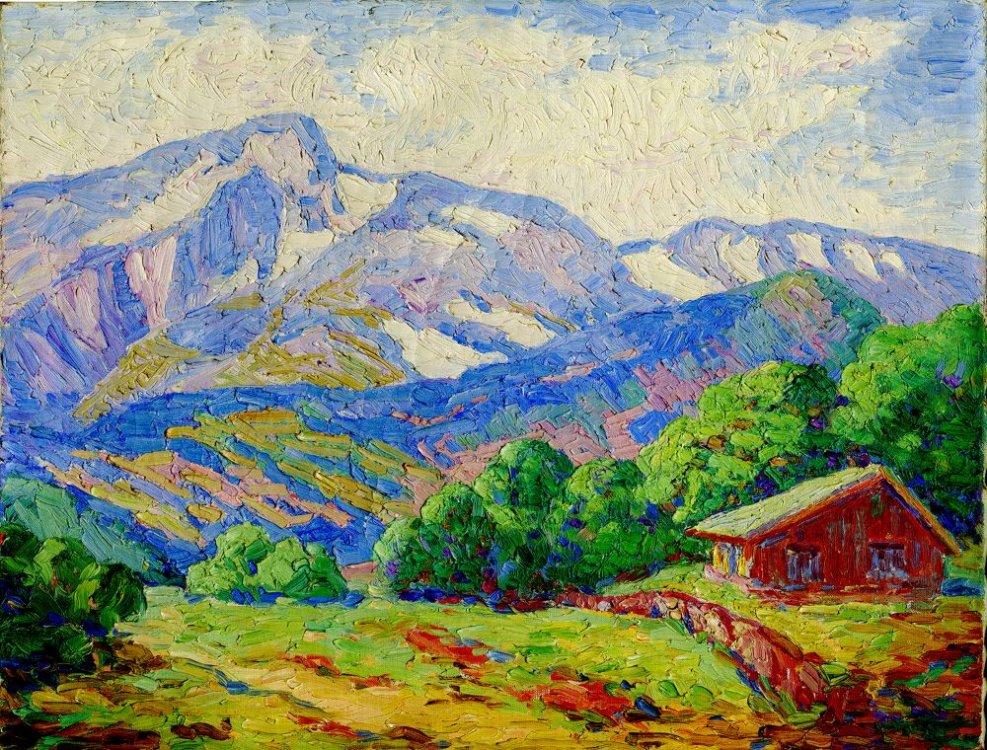 Caldwell likely completed this painting during the summer she studied under Birger Sandzén at the Broadmoor Art Academy in Colorado Springs, Colorado. Estes Park displays the broad, loose, Post-Impressionist style Caldwell embraced as a result of those studies. 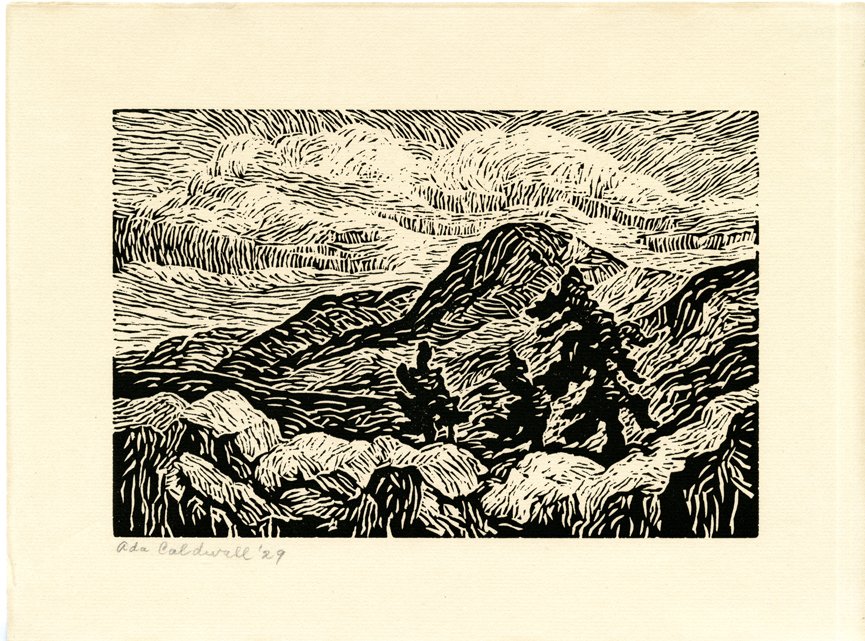 "The Rockies" or "Estes Park," 1929
woodblock on paper
1973.12.02
Gift of Neva Harding
Conservation treatment funded by Institute of Museum and Library Services, Museums for America Grant

In 1923 Caldwell studied painting at the Broadmoor Art Academy in Colorado Springs under the Swedish-American painter Birger Sandzén. Sandzén was a longtime art professor at Bethany College in Lindsborg, Kansas. This print is a product of Caldwell’s printmaking studies under him in the late 1920s, showing a scene that she likely sketched or painted during an earlier visit to Colorado. 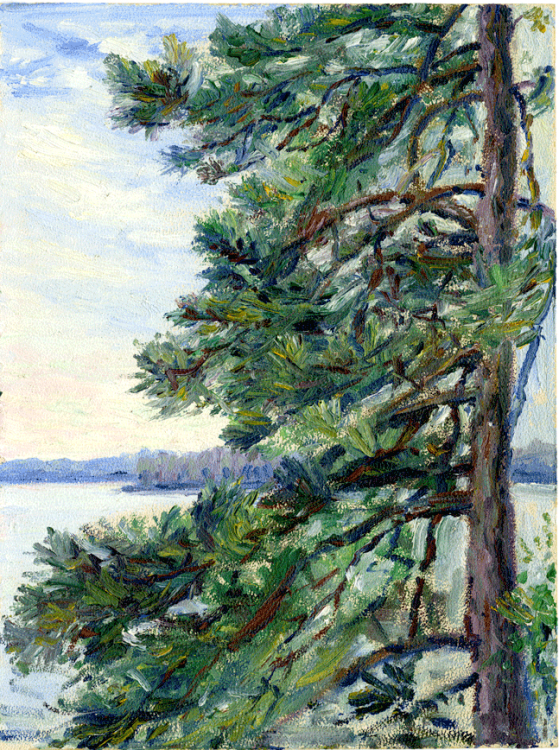 The Pine, 1936-1937
oil on paper
1973.12.01
Gift of Neva Harding
Conservation treatment funded by Institute of Museum and Library Services, Museums for America Grant

The Pine is one of the artist’s last known works, completed during a summer visit to Serpent Lake near Crosby, Minnesota. In 1936, due to her ill health, South Dakota State College granted her emeritus status. She took the trip to Serpent Lake in hopes of reviving her health, which unfortunately continued to deteriorate. Caldwell died at her home in Brookings, South Dakota in November 1938.