The South Dakota State University Foundation is a 501(c)(3) organization that raises and administers funds to benefit SDSU.

Founded in 1946, the Foundation has secured more than $900 million in gifts and commitments for SDSU in those 75 years. That success includes It Starts with STATE: A Campaign for South Dakota State University, which raised $255.7 million for students, faculty, facilities, athletics and other university programs from January 2007 to April 2013. The organization announced the university’s latest comprehensive campaign entitled Bold & Blue on October 21, 2021, which aims to raise $500 million to benefit the university. The Foundation holds more than $318 million in assets, including a $213 million endowment. The Foundation has 43 full-time employees and approximately 30 students on a part-time basis.

The mission of the SDSU Foundation is:
“Enhancing excellence by cultivating generosity and treasuring the loyalty of all we serve.” The SDSU Foundation raises and administers scholarship funds that benefit thousands of students and spearheads private fundraising campaigns for multimillion-dollar capital projects. To connect back to the university, the SDSU Foundation uses the words South Dakota State University, a line, and the word Foundation directly underneath as its logo. All rules governing the Institutional Logo pertain to the SDSU Foundation's logo as well, including incorrect uses.

The SDSU Foundation wordmark may be enlarged to any size that is practical and necessary, but should not be reduced to a size that reduces the height of the wordmark to less than 3/8 inch when the words are used alone or 1/2 inch when the logo mark is used within a box.

Creating a Bold Future for SDSU

Bold & Blue is the third and largest comprehensive campaign in South Dakota State University’s history. With a bold vision and an incredible community of loyal Jackrabbits, we’ll transform SDSU, creating a stronger and more robust future for this great university.

The SDSU Foundation Bold and Blue campaign logo may be enlarged to any size that is practical and necessary, but should not be reduced to a size that reduces the height of the SD logo to less than 1 inch.

When the campaign logo is reduced or enlarged, it should always be treated as one unit. All elements should be sized proportionately. The campaign logo should not be built. It should be used as a graphic, not typed, and it is available from the SDSU Foundation. 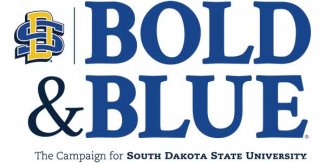