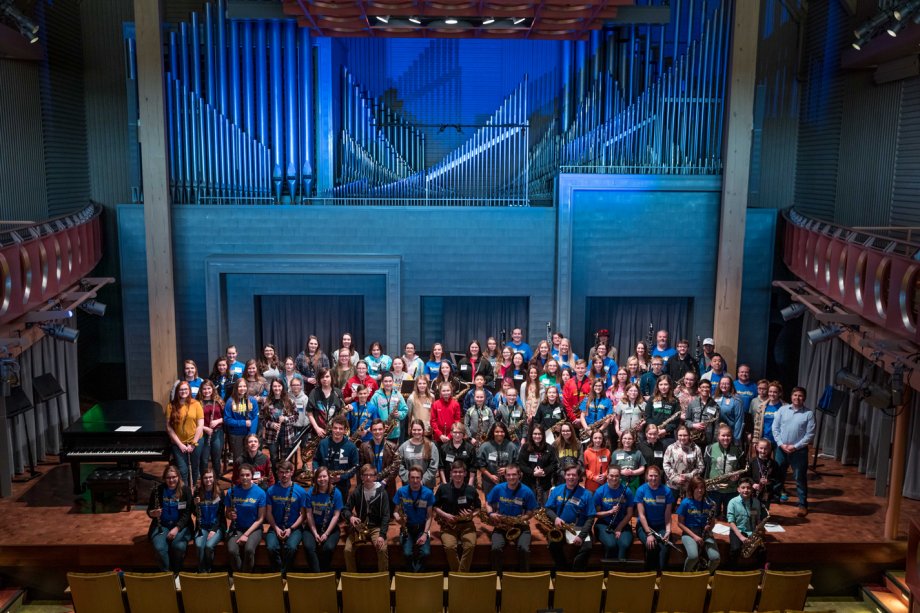 The School of Performing Arts will be hosting SDSU Woodwinds Day for middle and high school woodwind players on Saturday, March 21, 2020, on the campus of South Dakota State University. This day is dedicated to learning about all things woodwind-related. A variety of topics will be discussed including: tone production, scales, articulation, and warm ups. Current SDSU music students will be assisting throughout the day and will lead a discussion of opportunities to stay involved with music during college.

The day will also include performances by faculty and students. Everyone will join in the big flute, clarinet or saxophone choir finale! Parts will be sent out in advance so students are able to prepare.

Students grade 6 and up are welcome and they will certainly take away information that will strengthen your band. The event cost is $15 for a t-shirt - prepayment is required. If the $15 dollar fee is not paid, students are still able to attend; however they will not receive a t-shirt.

Register by Monday March 16.  Registration forms and letters have been sent out to band directors.

Dr. Lisa Bost-Sandberg is a flutist, composer, and improviser deeply committed to contemporary music as well as its rich roots in the classical repertoire. In demand as a soloist and chamber musician, she has performed throughout the United States and Europe, including National Flute Association conventions, new music festivals (SEAMUS, EMM, Pixilerations, Spark, and SCI), and guest appearances at universities. She performs as principal flute of the Greater Grand Forks Symphony Orchestra, is a founding member of the InterSpheres Trio which toured Hungary in 2014, and has recorded on the Albany, GIA, and North Texas Jazz labels.

Her compositions have been selected for performance at conferences of the American Trombone Workshop, World Saxophone Congress, North American Saxophone Alliance, National Flute Association, Society of Composers, and Iowa Composers Forum. Her most recent project, titled Chroma, is a series of eight movements of diverse instrumentations paired with paintings by artist and commissioner Marjorie Schlossman. Premiered at the Plains Art Museum in Fargo, North Dakota, the collaboration with Schlossman is the subject of a short film by Mary Trunk and Caren McCaleb.

A Montana native, Bost-Sandberg received her Doctor of Musical Arts degree in flute performance with a related field in composition from the University of North Texas as a recipient of the prestigious Masters and Doctoral Fellowship. She is also a graduate of New York University (Master of Arts) and The University of Iowa (Bachelor of Music). Her primary flute instructors include Terri Sundberg, Elizabeth McNutt, Robert Dick, Tadeu Coelho, and Tamara Thweatt. Bost-Sandberg’s primary composition instructors include Andrew May, Christopher Trebue Moore, Robert Dick, and Lawrence Fritts. She studied the Alexander Technique with Käthe Jarka of New York City and Pedro de Alcantara of Paris, France.

Dr. Scott Sandberg serves as Assistant Professor of Saxophone and Clarinet at the University of North Dakota and maintains an active schedule as a performer, clinician, and adjudicator. Internationally, he has toured China three times, including performing as a featured soloist with the East China Normal University Orchestra, and has performed world premieres of pieces at World Saxophone Congresses in Croatia (2018) and Scotland (2012). Sandberg has also performed in Canada, Switzerland, Italy, Austria, Ireland, the United Kingdom, and Norway. In the United States, he has performed at numerous North American Saxophone Alliance conferences and International Saxophone Symposiums as well as with ensembles such as the Dallas Wind Symphony, Bismarck-Mandan Symphony Orchestra, Dubuque Symphony Orchestra, Waverly Community Orchestra, Greater Grand Forks Symphony Orchestra, Singapore Slingers, Royal Klobasneks, and Dick King Classic Swing Band. His solo CD, “Duality: Works for Tenor Saxophone & Piano,” was recently released by Albany Records.

Sandberg serves on the Advisory Board of the Schmitt Music Sax Shop and is a Voting Member of the International Music Camp Corporation. He is a Selmer Paris and Conn-Selmer Endorsing Artist.