The In-Service Music Conference is an umbrella title used to denote the event that hosts the 87th Annual South Dakota Bandmasters Association Clinic, and the 53rd SDSU Choral Day activities.

Mickey Smith Jr.' is the recipient of the 2020 Music Educator Award ™ presented by the Recording Academy ® and Grammy Museum ®.  Under his direction, the Maplewood Middle School Band in Sulphur, Louisiana grew 500 percent. His goal is to help provide a quality education to each child in his classroom and throughout his community by promoting positive learning experiences where children not only grow musically, but personally too. Smith sees music and education as opportunities for all to discover the best in others and themselves. Through his nonprofit, MusicMakers2U, Smith provides instruments to children in the community. Throughout the school year, Smith conveys a message to students that each one of them has a "sound." Smith describes his personal "sound" as his ability to entertain, educate and elevate everyone to excellence.

In addition to community concerts, Offutt Brass performs patriotic music and fanfares for military ceremonies and important civic events throughout Nebraska and other areas of the Midwest. As professional Airman, Offutt Brass is committed to inspiring our American public, communicating our Air Force core values, and honoring our nation’s veterans through the power of music. They are proud to represent our nation’s Airmen who fly, fight and win in air and space.

Conductor Robert J. Ambrose enjoys a highly successful and diverse career as a dynamic and engaging musician. His musical interests cross many genres and can be seen in the wide range of professional activities he pursues. Dr. Ambrose studied formally at Boston College, Boston University and Northwestern University, where he received the Doctor of Music degree in conducting.

​Dr. Ambrose currently serves as Director of Bands, Professor of Music and Director of the School of Music Recruitment at Georgia State University, a Research institution of over 53,000 students located in Atlanta, Georgia. As Director of Bands he conducts the Symphonic Winds.

Dr. Ambrose is Founder and Principal Guest Conductor of the Metropolitan Atlanta Youth Wind Ensemble (MAYWE), a highly-select high school honor ensemble consisting of musicians from throughout the Atlanta area.  During his nine-year tenure as Music Director, nearly 1000 high school students participated in the MAYWE program and the ensemble was invited to perform at Carnegie Hall on two occasions. 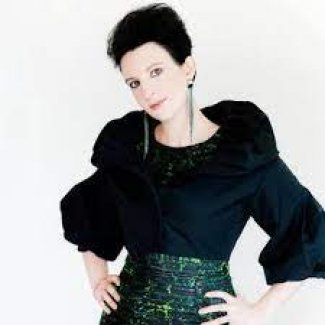 Soprano Lindsay Kesselman is currently based in Charlotte, North Carolina.

Recent highlights include a leading role in a new opera by Chris Cerrone, a world premiere performance at the national CBDNA convention in 2019 (John Mackey), a world premiere with the UNCG Wind Symphony in 2019 (D.J. Sparr), Samuel Barber’s Knoxville: Summer of 1915 with the Michigan State University Symphony Orchestra, the John Corigliano 80th birthday celebration at National Sawdust (2018), Quixote (Amy Beth Kirsten and Mark DeChiazza) with Peak Performances at Montclair State University (2017), the release of Antique Violences on Blue Griffin in 2017 featuring Songs from the End of the World (John Mackey), a leading role in Louis Andriessen’s opera Theatre of the World with the Los Angeles Philharmonic and Dutch National Opera (live recording released on Nonesuch Records, 2017), and an international tour of Einstein on the Beach with the Philip Glass Ensemble (2012-2015). This production won the prestigious Laurence Olivier award for Best New Opera Production in 2013.

Kesselman holds degrees in voice performance from Rice University and Michigan State University. She is represented by Trudy Chan at Black Tea Music, and lives in Charlotte, NC with her husband, conductor Christopher James Lees, and son Rowan.

Nationally recognized as a leader in the field of youth chorus directors, Ms. Ellsworth served as Artistic Director of Anima – Young Singers of Greater Chicago (formerly Glen Ellyn Children’s Chorus) from 1996 – 2018. Under her direction, Anima won several national awards, including the 2014 Tribute Award from Chicago A Cappella, the 2013 ASCAP award for Adventurous Programming from Chorus America, the 2009 Dale Warland Singers Commissioning Award jointly given by the American Composers Forum and Chorus America, and the once-in-an-organizational lifetime Margaret Hillis Award for Choral Excellence from Chorus America (2008).

In great demand as a guest clinician and conductor, Ms. Ellsworth has conducted all-state choirs and festivals in over 30 states, the Northwest, North Central, and Southwest divisions of the American Choral Directors’ Association, and the 2019 national children's honor choir for ACDA's 60th Jubilee. She has conducted Anima by invitation at three national conferences of ACDA, 2 national conferences of Chorus America, as well as concert tours to six continents.

Inspired by captivating narrative, speculative fiction and making better humans through art, the music of Timothy C. Takach has risen fast in the concert world. Applauded for his melodic lines and rich, intriguing harmonies, Takach has received commissions and premieres from a wide variety of organizations including Roomful of Teeth, the St. Paul Chamber Orchestra, St. Olaf Band, Cantus, Pavia Winds, Lorelei Ensemble, VocalEssence, the DeBartolo Performing Arts Center, The Rose Ensemble, and numerous high school and university choirs. His compositions have been performed on A Prairie Home Companion, The Boston Pops holiday tour, multiple All-State and festival programs and at venues such as the Library of Congress, Kennedy Center and Royal Opera House Muscat.

He is a co-creator of the theatrical production of All is Calm: the Christmas Truce of 1914, by Peter Rothstein. The critically adored show has had over 120 performances since its premiere in 2006. He was also selected for the 2014 Nautilus Music-Theater Composer-Librettist Studio. In 2018 his oratorio We, the Unknown premiered at the Folly Theatre in Kansas City, featuring the Heartland Men’s Chorus, and in 2019 “Su Rahva Koda (The House of  Your Kindred)” was premiered by the Memphis Symphony Orchestra. 2019 also saw the premiere of  Helios, Takach’s new 65’ work for a cappella choir inspired by the solar system. In 2015  Takach placed third for The American Prize for Composition  for Wind Ensemble for his piece “Frost Giant.” He currently serves as Composer-in-Residence for The Singers-Minnesota Choral Artists and the Texas Boys Choir.

Takach has frequent work as a composer-in-residence, presenter, conductor, clinician and lecturer for conventions, schools and organizations across the country. He is a full-time composer and lives in Minneapolis with his wife and two sons.

Manufacturers, publishers, distributors, and retailers are invited to exhibit at our convention. For an application form, please email Don Crowe. Exhibits this year will be open on Thursday, February 10 and Friday, February 11.

Allocated space is based on one 8’ table or rack: exhibitor displays must fit within the allotted 8’ space. If two or more tables/spaces are needed, please be sure to indicate this on the enclosed application form. Checks for exhibitors should be made payable to the South Dakota In-Service Music Conference, and sent with the enclosed application form to Dr. Don Crowe, School of Performing Arts, Box 2830, SDSU, Brookings, SD 57007.

*Help will be available for unloading and loading Wednesday evening (from 6:00 p.m. to 9:00 p.m.) Please indicate on the enclosed form whether you will require such help.

Space will be allocated according to the order in which applications are received.

The South Dakota In-Service Music Conference assumes no responsibility or liability for display merchandise.  There will, however, be security personnel on duty twenty-four hours each day.