In 2001, the 107th United States Senate became nearly evenly split; 49 Democrats, 50 Republicans, and 1 Democratic-voting Independent. Not since the 83rd Congress had there been such a close divide. Much like the 83rd, the split was decided by an Independent Senator. Jim Jeffords (I-VT) changed his party affiliation from Republican to Independent and caucused in favor of the Democrats. So began the complicated affair of the 107th United States Congress.

Senator Thomas A. Daschle (D-SD) acted as the majority leader for 17 days, from January 3rd to January 20th. During this time, Vice President Al Gore was still President of the Senate, giving the Democrats a slight majority due to his tie-breaking vote.

Despite their new majority, the Republican Party lacked the numerical advantage to work without compromising with the Democrats. Senators Daschle and Lott met to discuss the possibility of sharing power between the two parties before Congress was trapped in endless gridlock.

With a 50-50 split of the Senate at the beginning of the 107th session, Senators Daschle and Lott negotiated the status of the new Congress. The debate lasted weeks, with both sides being forced to make concessions to the other for a stable Senate.

“This is our work, the work of government. It’s our job. No matter how bitter the toe-to-toe fighting might sometimes become, you can never stop talking. Because if you don’t talk, you can’t govern. And that, in the end, is your obligation as a public servant—not to win elections, but to do the work of government once you do win.” Tom Daschle, Like No Other Time, 2003, p. 34

“It can force us to live up to the truest and best meaning of that word—non-partisanship, Americanship, that is what we ought to call it… This is a classic case of extending the hand of friendship, of good faith.” Trent Lott, Congressional Record January 5, 2001, Volume 145, Number 3.

Senate Resolution 8 was the result of their discussions. Despite the criticism Senator Lott received from some elements of his party for negotiating with the opposition, Resolution 8 was unanimously approved by the Senate. The resolution covered three main points of interest:

This was pushed for by Daschle to ensure the Democrat-focused committees did not receive slashed funding under a Republican Senate.

Both sides pressured for some form of this agreement, aiming to ensure that neither party had an overwhelming advantage in any committee despite the roughly equal division.

Section three is primarily made up of a series of powers granted to the Majority and Minority Leaders not otherwise covered in sections one and two. This allows both leaders to keep committee balance of power in check, as well as ensure debates continue indefinitely.

The full transcript of Resolution 8 can be seen at Congress.gov.

The majority would switch one last time at the end of the 107th Congress due to the death of Senator Paul Wellstone (D-MN) and the defeat of Jean Carnahan (D-MO) in a special election. However, as Congress was not in session at the time, it was decided recognition would be delayed until the start of the 108th Congress.

In 2021, the United States Senate split 50/50 again. Senator Daschle and Senator Lott wrote a piece for the January 15, 2021, edition of the Washington Post about their experiences in 2001 and of the challenges faced by the Senate leadership.

PF Bentley graciously granted permission for his photographs to be used in this virtual exhibit. For more information about Mr. Bentley's work, please visit his website at pfpix.com. See additional images of Senator Daschle taken by Mr. Bentley on his website.

2014 Daschle Dialogue: How Much Partisanship Is Too Much? 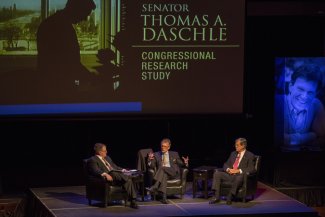 On October 1, 2014, SDSU hosted the inaugural Daschle Dialogue at the SDSU Performing Arts Center. The event featured Senator Thomas Daschle and Senator Trent Lott discussing bipartisanship. The Senators described the historic 50-50 split in the U.S. Senate during the 107th Congress and the attacks on September 11, 2001. Chuck Raasch, a 1976 journalism graduate who has spent 27 years as a national correspondent for Gannett News Service, USA Today, and the St. Louis Post-Dispatch, moderated the Dialogue.

You can view the event on the C-SPAN website.

This collection is composed of papers created during Tom Daschle's tenure in the U.S. House of Representatives. Material includes voting record information and "The Daschle Record" which container data on his voting record, sponsorships, and summaries of committee and subcommittee records from 1979 to 1986. Also included are some campaign files.

Composed of records created by Senator Daschle and his staff during his tenure in the U.S. Senate. Included are trip schedules, speeches, sponsored and cosponsored legislation, and administrative files including financial disclosures, appointments and schedules. This series does not contain much material related to Daschle's campaigns for voting records during this time. Also included are files on the Whitewater issue during the Clinton administration, veterans’ issues, Ellsworth Air Force Base, South Dakota Water Projects, the accident of South Dakota Governor Mickelson, and aviation issues.

The Personal Papers are composed of materials Daschle separated from the rest of the collection which were of personal interest to him. Included are pre-congressional materials, campaign records, legislative records, correspondence, political records, media files, and files saved for their intrinsic value.

The subject files are composed of files related to specific topics that have been separated from the collection because of their significance, interest to researchers, or topic. Subjects include Agent Orange, the Impeachment of President Clinton, material related to economics collected by Chuck Marr, Economic Policy Advisor to Senate Majority Leader Tom Daschle from 1999-2004, and files dealing with the 1995 "shutdown" of the United States federal government.

The collection is composed of materials Daschle gathered related to her career in aviation and her husband’s career in the U.S. House of Representative and U.S. Senate. Included are awards and recognition for her work in aviation, collected materials and notes from her husband, campaign records, audio-visual media, and photographs.

Bill Nibbelink worked on Tom Daschle’s first two campaigns for the U.S. House of Representatives in 1978 and 1980. He also worked out of Daschle’s Mobile Service Office that provided constituent service for the eastern 22 counties in South Dakota. The collection primarily consists of alcohol fuel publications, constituent robo letters, photographs, and campaign materials including a recount handbook.