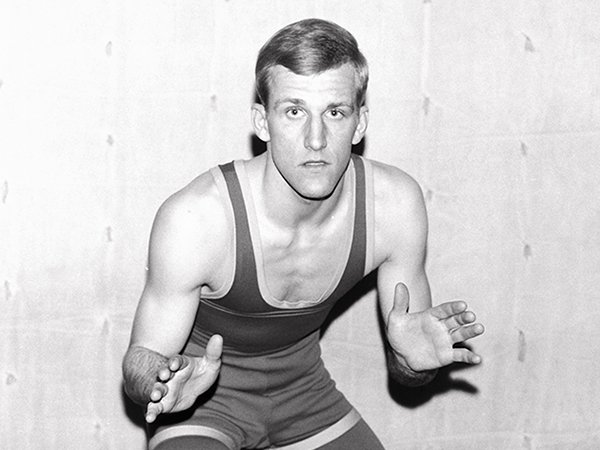 The Jim Koch Amateur Wrestling Collection contains 31 wrestling books and 61 bound volumes of Amateur Wrestling News, the oldest and most respected wrestling publication in the country. The collection’s AWN issues date from January 1956 to the present. The monthly magazine features results at the high school, college, and world levels. Tournaments and major conferences are covered in detail.

The collection belonged to Jim Koch, a South Dakota State University graduate and esteemed college wrestling coach. Koch’s family donated the collection to Briggs Library in 2017, thanks to the facilitation of library volunteer Bob Bartling. Bartling created an index of every issue of AWN, which will be converted to a database soon. Bartling was also responsible for bringing in the Prairie Striders Running Club Library.

Jim Koch was well-known in the wrestling community. His wrestling career started in 1963 as a junior at Milbank High School. As a senior, he went 23-1-1 at the state meet, making him the school’s first wrestler to earn a medal at the competition

Koch was recruited at SDSU for football and wrestling, and was awarded the Stephen F. Briggs academic scholarship. He focused on wrestling after his first year. Koch had an undefeated freshman wrestling season. He then became the varsity 160 pounder and competed in the North Central Conference championship finals for the next three years. Koch graduated from SDSU with honors in 1969. He earned a Master of Science in Health, Physical Education and Recreation from SDSU in 1974. Koch’s thesis can be viewed here.

His coaching career began in 1969 as an SDSU graduate assistant. In 1970, Koch joined the University of Wisconsin-Parkside as its first head wrestling coach. He remained at UW-Parkside for 41 seasons until his retirement in 2011, during which time the school’s wrestling program earned numerous accolades. According to a UW-Parkside press release, “his wrestlers earned 128 All-America honors, 80 Academic All-America honors, and 14 wrestlers won individual national championships. Under his tutelage, Ranger Athletics emerged as one of the top programs in the nation as his teams finished with a Top 10 national ranking in 23 seasons.” His wrestlers participated in 68 national tournaments, and his teams reached both the NCAA Division II Nationals and the NAIA Nationals 31 times.

Outside of the university program, Koch was also a leader in the sport on the national level. To name a few of his roles, he chaired the National Hall of Fame Committee for both the NAIA and the NCAA Division II and oversaw the induction of more than 70 and 74 members, respectively. Koch served terms as president for those same organizations’ National Wrestling Coaches Association, and was influential in developing the academic All-American awards requirements for the two groups. He was the host coach of the NCAA Division II National Tournament in 1982, 1990, and 2002.

Koch passed away March 23, 2017, at the age of 69, as the result of injuries from being struck by a car while jogging in St. Louis, Missouri, where he was attending the NCAA Division I Wrestling Championships. Just prior to his death, the National Wrestling Coaches’ Association renamed its hall of fame to the Jim Koch Division II Wrestling Hall of Fame. In November 2018, UW-Parkside Wrestling revealed the new Jim Koch Wrestling Center practice facility.