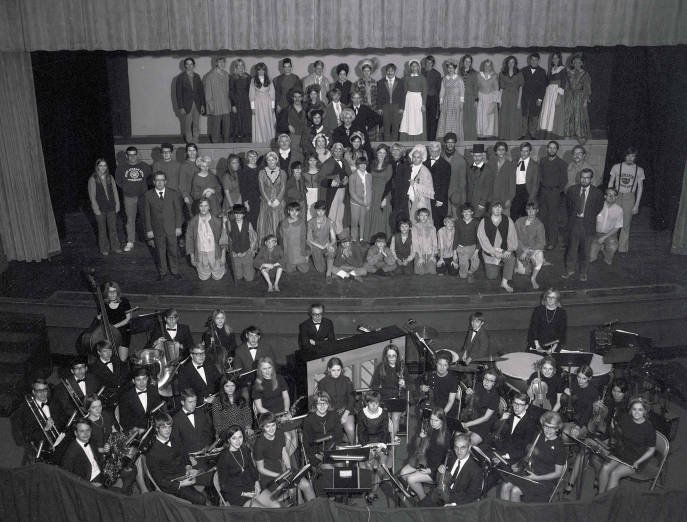 Since the early 1980s, student graffiti accumulated in Doner Auditorium’s green room, makeup room, sound booth, and other backstage areas. The walls, the ceilings, and even the pipes held the inscriptions, which included signatures, dates, season lineup schedules, quotes, and favorite lines from plays performed in the auditorium.

Doner Auditorium was built in 1912 as part of Morrill Hall (formerly called the Administration building). It held an estimated 400 Prairie Repertory Theatre (PRT) and State University Theatre (SUT) shows. When the new SDSU Performing Arts Center opened in 2019, Doner Auditorium ceased being used for university productions. The auditorium will eventually be repurposed, taking with it this historical record of theatre student perspectives.

A digital replica of Doner Auditorium’s backstage was created by SDSU Archives & Special Collections. The staff developed an online exhibit with photographs and scans of the rooms, meticulous transcriptions of the graffiti content, and digitized materials from the Archives’ Theatre Collection such as play programs and photographs.

The exhibit provides a behind-the-scenes view of the theatre program, and it highlights the work and lives of the students themselves, not just the characters they portrayed on stage. Theatre scholars, students, and fans can explore the exhibit to study theatre trends in areas such as stage design, costumes, and graphic design of publicity materials. The exhibit can also be a tool for theatre instructors to boost interest in theatre participation among youth.

On September 23, 2021, the SDSU Archives held an event to unveil the digital collection and exhibit.  Digital Initiatives Coordinator, Wyeth Lynch, presented the digital preservation project that saved the theatre's student history, and current and former theatre directors JD Ackman and Jim Johnson shared memories from their time in the auditorium. If you missed the event, you can see the recording on YouTube.

The Doner Auditorium Digital Preservation Project was made possible in part by a South Dakota Humanities Council grant and private donations.

View images of the backstage rooms of Doner Auditorium, including the green rooms and a storage room. 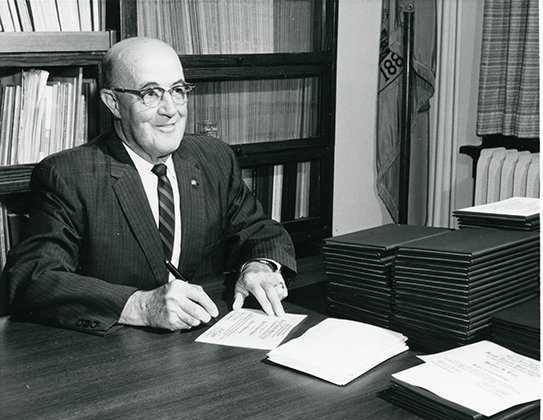 The auditorium in Morrill Hall (Administration Building) was named Doner Auditorium in 1978 to honor David B. Doner for all of the work he had done for the University in his 45 years of service.

In 1913, Doner arrived at South Dakota State College, a member of the first four-year class to be graduated from its School of Agriculture (for high school age students). In 1918, his freshman college year was interrupted by WWI. In 1919 and 1920, he taught agriculture to returning soldiers at SDSC. In 1920, he became assistant secretary of the College, while working on his B.S. degree, which he received in 1928. In 1932, he became the Dean of Men. From 1922 to 1953, he was the SDSC Registrar. In 1953, he moved into the role of director of Admissions and Records. From 1936 to 1961, Doner was the secretary of the alumni council, where he was editor of the Alumnus. From its inception in 1945 until 1964, he was the Treasurer of the SDSC Alumni Foundation, which awarded him “Distinguished Alumnus” in 1964. He retired in 1964 and lived in Apache Junction, AZ. In 1973, SDSU awarded him an Honorary Doctor of Humanities.

During his career, Doner served nine SDSU Presidents and signed 12,693 diplomas awarded by SDSU. At his final commencement ceremony on June 7, 1964, the last diploma he signed was the honorary Doctor of Humanities degree awarded by SDSC to Ray C. Cunningham of Ames, IA. When Doner first arrived at SDSC from his family's Potter County farm in November 1913, it was Cunningham (then of Conde, SD) who Doner said met him at “the train depot, got me a room and a job and took me under his fatherly wing.”

Doner was active in the community as well: supervisor of the Boy Scouts training program; member and President of the Brookings (SD) School Board; Sec-Treasurer of the South Dakota State Associated School Boards; District Governor and International Trustee of Kiwanis; and Chair of the Finance Committee to raise funds to build the Crippled Children’s Hospital and School in Sioux Falls.

David Doner died in September of 1978. 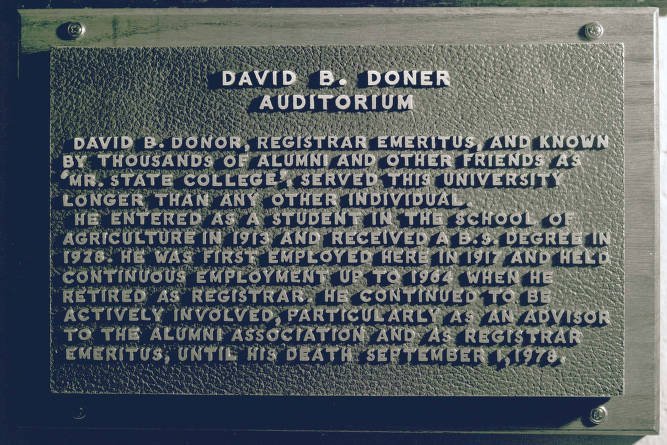 The University Archives has a small collection of materials about Doner, which is composed of a scrapbook that largely documents his career of public service. An inventory of what is in the collection can be found in the finding aid for the David B. Doner Scrapbook.

The history of theater at South Dakota State University began with the formation of eight literary societies in the 1880s. The State University Theatre Records are composed of programs, posters, season ticket brochures, and photographs from the plays, musicals, and revues produced by the group. 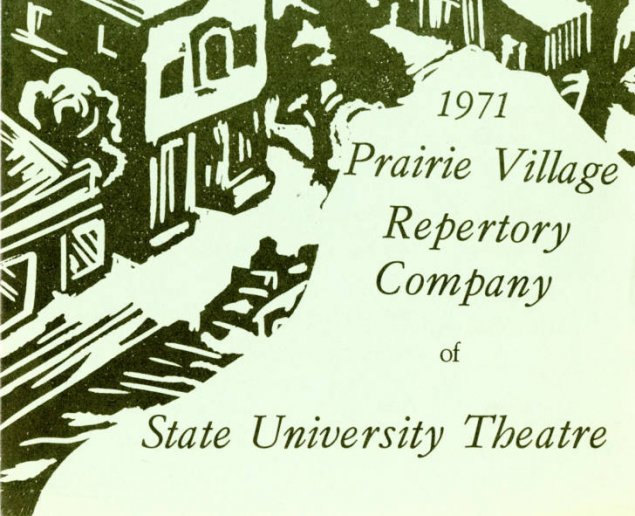 The Prairie Repertory Theatre Archives are composed of programs, posters, season ticket brochures, scrapbooks, and photographs from the plays, musicals, and revues produced by the group.