The Digital Library of South Dakota (DLSD) is a collaboration of the libraries of the six Board of Regents colleges and universities as well as partners in the state of South Dakota. SDSU's collections include digital photographs, manuscripts, and ebooks related to the history of SDSU and South Dakota life.

Explore SDSU's Collections in the Digital Library of South Dakota

The South Dakota State University Archives acquired the papers of former Congressman and Senator Thomas A. Daschle in 2005. Senator Daschle graduated from SDSU in 1969 with a degree in political science. This collection documents his distinguished twenty-six year public career in the U.S. House and Senate. Senator Daschle's papers include correspondence, legislative documents, photographs, audiotapes, videotapes and other materials covering Daschle's professional life.

Ben Reifel was a Lakota Sioux and a Republican United States Congressman from the First District of South Dakota from 1961-1971. This collection is composed of memorabilia, scrapbooks, campaign items, personal items, photographs, and sound recordings related to Ben Reifel's career as a public servant, especially his years in the United States Senate and his work with the Bureau of Indian Affairs.

Edgar S. McFadden (1891-1956) was a scientist who made breakthroughs in wheat genetics in South Dakota and Texas. From a single seed he developed a spring wheat variety named 'Hope' that was immune to stem rust. This accomplishment set the stage for greater wheat production during World War II and the recovery years after. The collection consists of photographs and field notebooks.

Frank Denholm was a member of the United States House of Representatives from South Dakota from 1971-1975. He also worked as a farmer and auctioneer, FBI Agent, and engaged in the business of interstate trucking. This collection includes papers, photographs, slides, audio recordings and campaign artifacts, and scrapbook, most of which is associated with his congressional work.

Gertrude Stickney Young was a professor of history at South Dakota State College from 1907 to 1942 and a writer of historical sketches of South Dakota. This collection of her papers is composed of manuscripts, correspondence, published works, and other personal materials.

South Dakota State University was designated as an official U.S. depository library in 1889. These materials cover a wide range of topics including agriculture, business, commerce, education, health, social issues, current events, congressional issues, and statistics. In addition to the Federal Documents published by the GPO, the collection includes a large collection of maps and microforms as well as State of South Dakota Documents.

Hobo Day is the homecoming celebration for South Dakota State University. The first Hobo Day occurred November 2, 1912. Homecoming thrives at South Dakota State University and is the largest one day event in the state. The return of alumni to their alma mater for a weekend of football, fun and memories has flourished and grown over the decades, embodying the essence of Jackrabbit Pride.

The South Dakota State University's yearbook, the Jack Rabbit was issued by the Junior Class from 1907-1934. Because of this, each yearbook for that time period documents the previous year. For example, the 1910 Jack Rabbit chronicles the events for the 1908-1909 academic year. Since 1935, the yearbooks have been produced by the Student Association and document the issued year's activities.

The collection consists of correspondence (1914-1916) between Henry L. Loucks and Richard F. Pettigrew during 1914-1916. R. F. Pettigrew was a lawyer, surveyor, and land developer. He represented the Dakota Territory in the U.S. Congress and was a U.S. Senator from South Dakota after the Dakotas were admitted as states. H.L. Loucks was an economist and a Populist candidate for Governor of South Dakota in 1890. The collection is mainly political in nature, dealing with issues of the Progressive movement in the United States in the early 1900s.

This collection is composed of photographs, planning materials, and programs related to a South Dakota basketball delegation trip to Cuba in 1977. Senator George McGovern organized the trip after visiting Cuba in 1975.

The trip, from April 4-8, 1977, was a joint venture between the Senator McGovern and Senator James Abourezk, and between the University of South Dakota and South Dakota State University. A total of twenty people travelled as a delegation and included Dave Martin, SDSU Sports Director, Senators McGovern and Abourezk, several members of the national press, and five students and five advisors from SDSU.

Hansen during his time head of the Horticultural Department of South Dakota State College from 1895 to 1937, as well material gathered by his granddaughter, Helen Hansen Loen.

This collection consists of publications, documents, images and other materials relating to the history of the Brookings area and South Dakota. These materials also include the George and Evelyn Norby Collection, which relates to the City of Brookings.

Rare Books and Manuscripts at SDSU

This collection of photographs features buildings and landmarks from the early years of the university when it was called Dakota Agricultural College, through the modern era. Researchers will find images of early campus buildings such as Old North, Old Central, and Solberg Hall, as well as more modern buildings such as the Performing Arts Center and the Wellness Center. Images include interior and exterior photographs as well as ground breaking, dedication ceremonies, and other events. 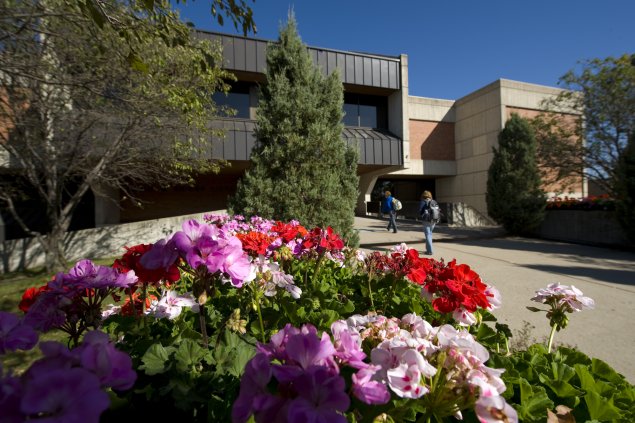