“Feeling Thermometers” are commonly used by political scientists to measure support of political figures, since it is a very intuitive and sensitive measurement. A score of 100 means a respondent has the warmest of feelings towards an individual, a score of 0 the coldest feelings, with 50 being neutral. Results of our survey show that South Dakotans are relatively cool towards President Biden. The President’s “feeling thermometer” is at 37. Given the fact that South Dakota is a solidly Republican state and that Presidents Biden got only 35.6% of the votes in last year’s election, this finding is not surprising. Former President Trump’s thermometer was at 43, which is nearly identical to the value of 42 from October of last year. The thermometers of Senators Rounds and Thune were 44 and 45, respectively, Governor Noem scored 48, and Representative Johnson 52.  These results are similar to our findings in general electorate in our inaugural poll in October of 2020. 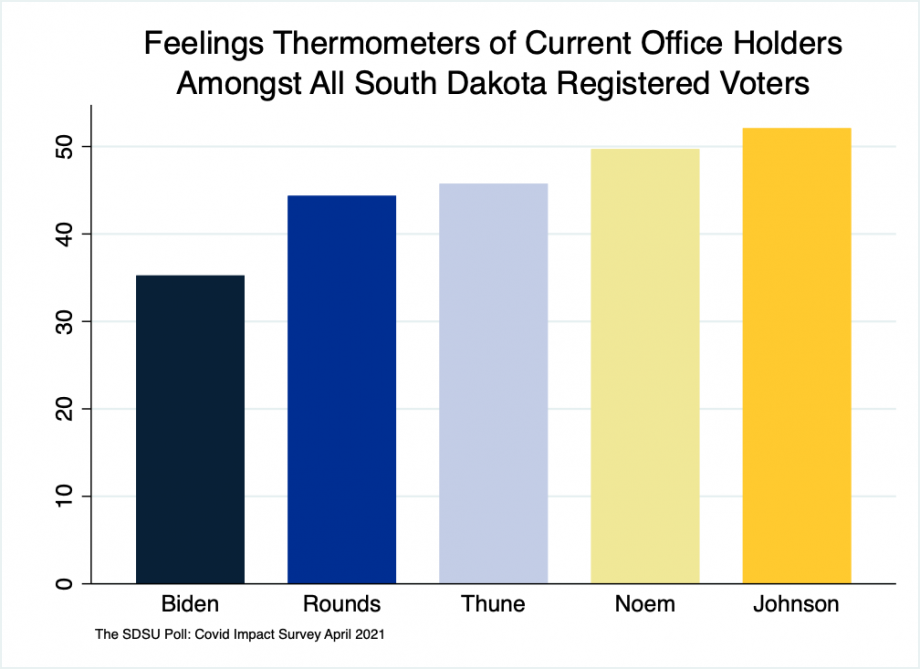 Support of Governor and Trump Remain Strong Amongst Republicans, But the Congressional Delegation’s Popularity is Waning

Our findings show that South Dakota leaders enjoy fairly strong support from the Republicans in the state. Governor Noem recorded the highest support at 77, followed by Representative Johnson at 66, and Senators Thune and Rounds both at 62. The former President remains popular among South Dakota Republicans with a score of 71. Predictably, the thermometer score of President Biden was quite low at 14 among the state Republicans. 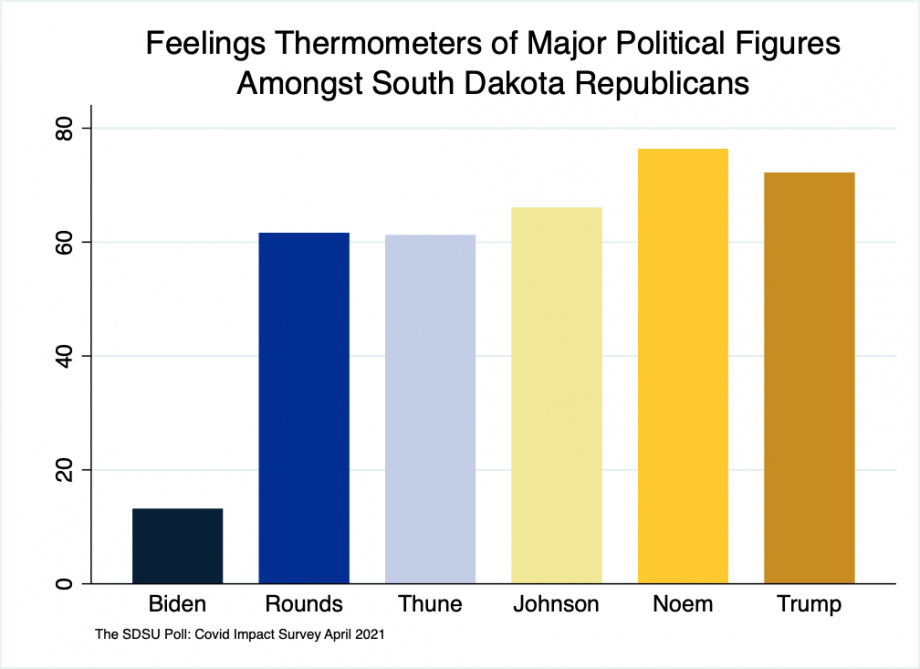 It is important to note that the feelings thermometers on Governor Noem and former President Trump were virtually unchanged between our April 2021 and October 2020 polls amongst South Dakota Republicans (their differences in ratings in both polls were within the margin of error), whereas our all-Republican congressional delegation suffered some serious dips in their popularity. Johnson, Rounds, and Thune dropped 9, 10, and 14 points respectively. This is a sharp break from the governor. As we noted in our post-election survey, most Republicans in the state questioned the fairness of the election. These sentiments ultimately came to a head in the January 6 assault on the Capitol, and have been sustained ever since in conservative media outlets. Through this all, the governor has remained steadfast in her support of the former president. Meanwhile, Johnson, Thune, and Rounds were walking a narrow path in their handling of the post-January 6th political environment: publicly breaking with the former president on the certification of Biden’s victory, yet voting against his impeachment. Since former president Trump remains the singularly most popular national figure in the Republican party, this public break has undoubtedly cost our congressional delegation some support within the party. However, given their overall levels of support, we doubt any risk to their electoral safety. 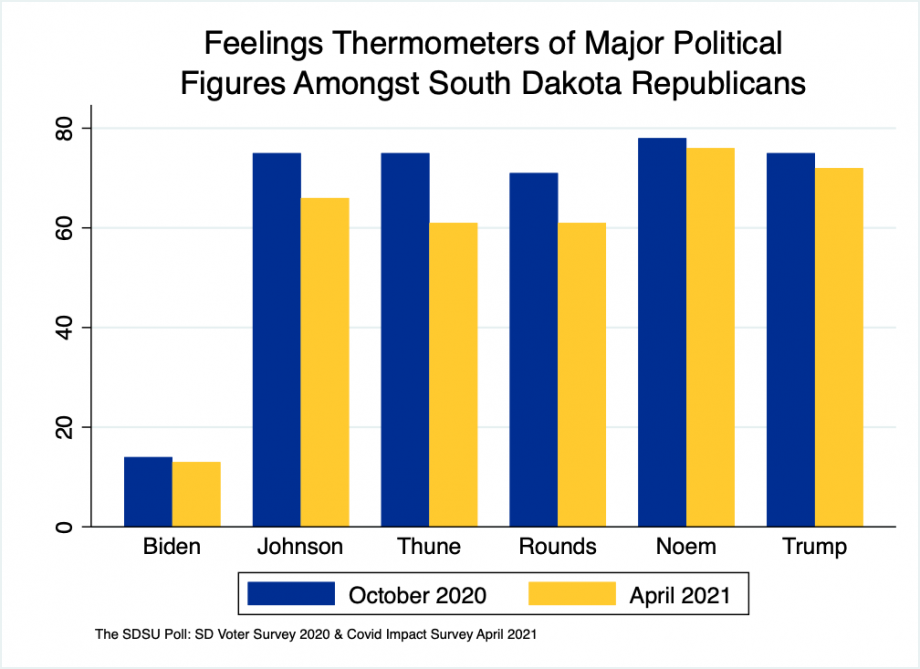 Predictably, President Biden enjoys solid support among South Dakota Democrats with a score of 77, which is slightly higher than the support former President Trump enjoys among Republicans in the state. The results also show that some Republicans are substantially more popular than others amongst Democrats. Representative Johnson continues to enjoy the highest bipartisan support with a score of 33. Senators Thune and Rounds are at 24 and 19, respectively, with the Governor trailing behind at 10, and Trump at 6. The low levels of support for the Governor are very likely due to her close association with the former President and the adoption of his rhetoric since leaving office in January. 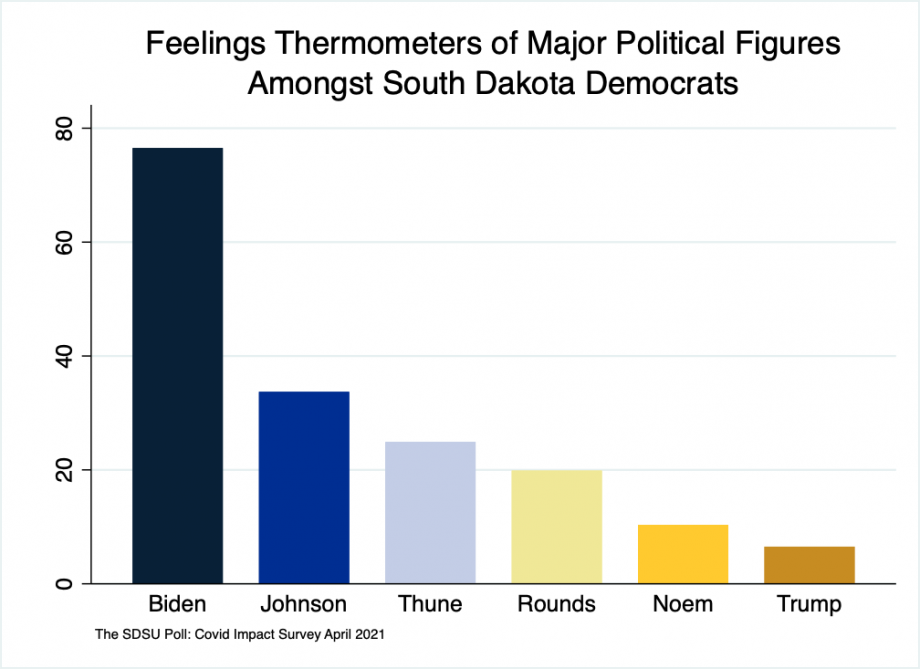 Independents Have Strong Support for Johnson, and Are Middling on the Others

Amongst South Dakota’s voters, approximately 25% claim to be independent (46% and 29% of voters identify Republican and Democrat, respectively). Most of these independents “lean” towards one of the two major parties - 48% of them towards the Republicans and 28% towards the Democrats. Given Republican dominance in the state and the Republican’s “closed” primary system, this is not a surprising balance. Amongst independents, Rep. Dusty Johnson is a clear favorite. His thermometer rating is a strong 51 “degrees.” Governor Noem and Senators Thune and Rounds are all within a point of each other straddling 42, while former president Trump scores 36, and President Biden scores 32. 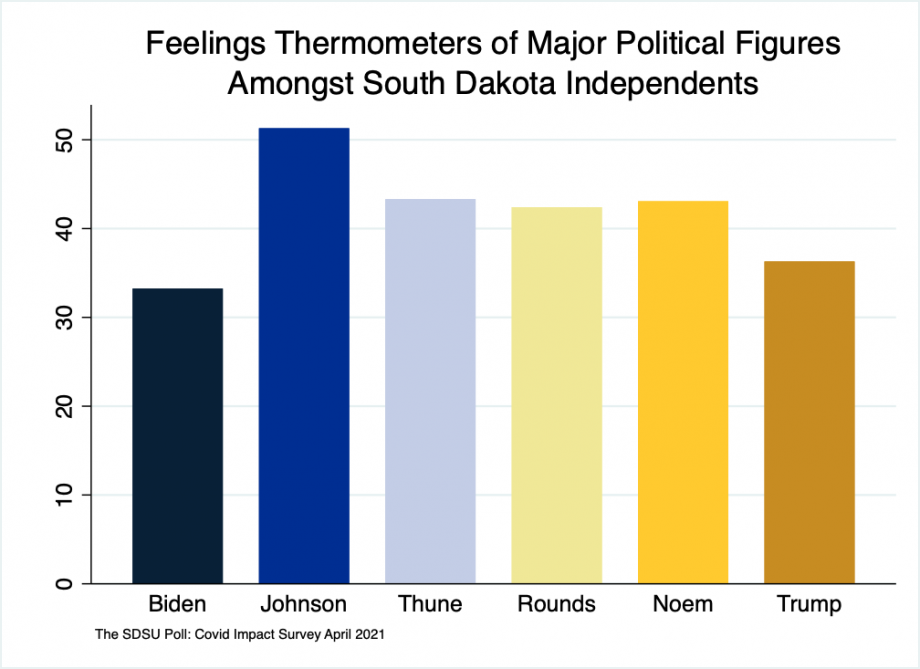 Next week, we will conclude our public releases of data with a discussion of religiosity in South Dakota, and an examination of trust and how that shapes attitudes on COVID-19 mitigation and vaccination.