South Dakotans Believe the Election Was Conducted Fairly in Our State

The 2020 Presidential election was one of the most polarized, if not the most polarized, elections in the country’s history. The results of the survey we conducted prior to the election revealed that 64% of South Dakotans were concerned about the fairness and integrity of the upcoming election. We reported that 44% Democrats and 78% Republicans, respectively, showed concern about the election fairness. 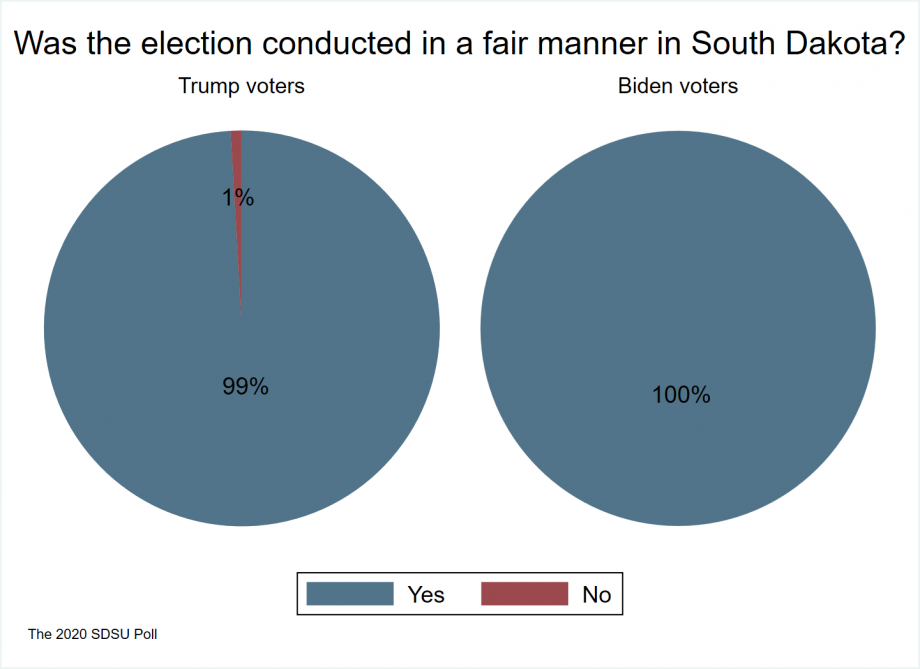 As part of the post-election survey we also asked if South Dakotans are concerned about the integrity of the vote in our state as well as in other states in separate questions. We found that South Dakotans were not at all concerned about the fairness of the election in our own state. Both Biden and Trump voters agree that the election was conducted fairly here. Trump won the state by a large margin congruent with expectations from pre-election polling, which helps explain why both Trump and Biden voters do not doubt the election fairness in South Dakota: the outcome was never in doubt. Additionally, South Dakota has had long established practices of in-person early voting and voting by mail that did not require much alteration to accommodate demands for alternative voting modes in the face of the coronavirus pandemic. Other states were compelled to drastically alter procedures in a rather short time frame. 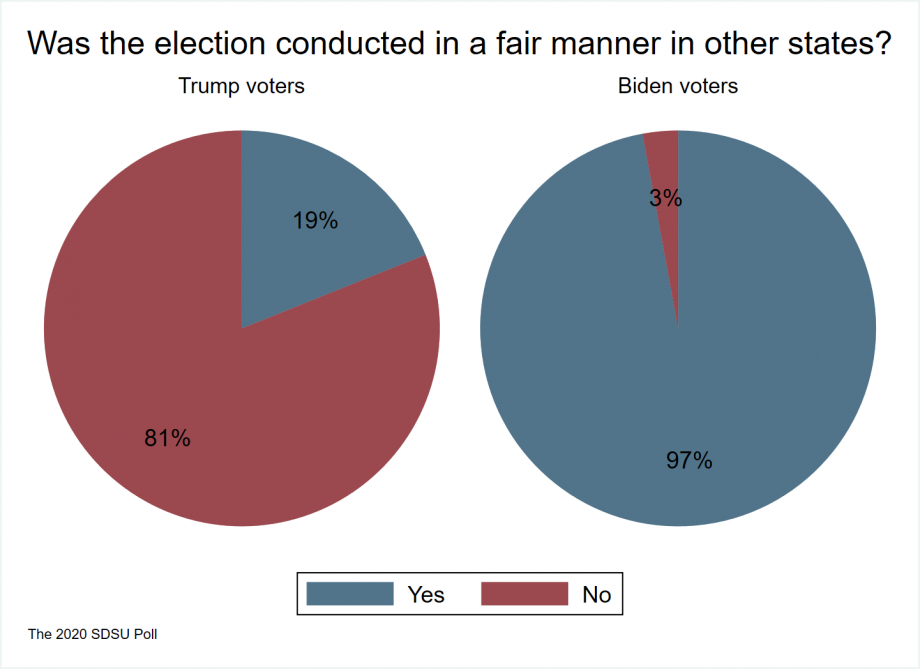 While there is a consensus that the election was conducted fairly in the Mount Rushmore State, the survey results showed a large difference when it comes to opinion on the fairness and integrity of the election in other states. 97% of Biden voters in South Dakota believe that the election was conducted fairly in other states compared to just 19% of Trump voters. Conversely, 81% Trump voters believe that the election was conducted unfairly in other states, whereas only 3% of Biden voters felt the same. These suspicions are largely fueled from the cues that South Dakota Republicans are taking from GOP opinion leaders, office holders, and conservative media. The president has yet to concede the election and remains steadfast in his legal challenges, while only a handful of GOP office holders have been willing to publicly refer to Biden as the president elect or seriously question the president’s claims. Moreover, conservative media outlets like OAN and Newsmax (who are rapidly gaining market share in conservative circles since the election) are largely supportive of the president’s legal efforts, and refuse to acknowledge the results. It appears that supporters of the president have accepted and adopted the president’s claims about the unfairness of the election. 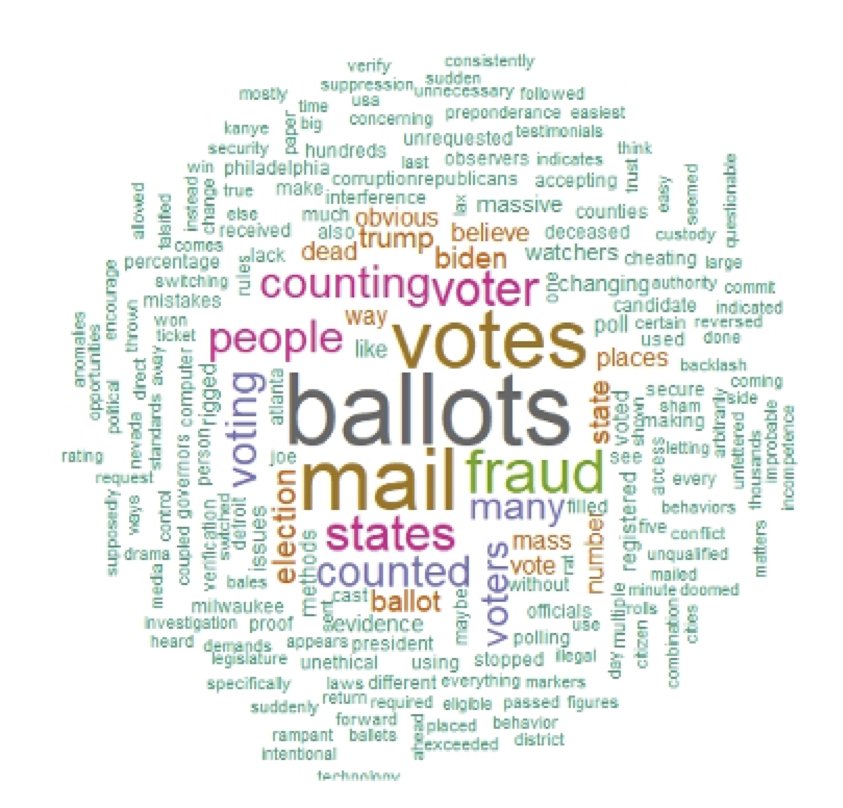 To further understand why some South Dakotans are concerned about the fairness of the election in other states, we also asked a follow-up open-ended question on why the election was unfair. We then created a “word cloud” to visually represent these answers. This method helped us to identify the words that were used most frequently in the answers on why the election in other states was not fair. The results of the analysis showed that some of the most commonly used words were “ballots”, “mail”, “votes”, and “fraud”. It appears that Trump voters in South Dakota are taking cues from the president and the Governor who has adopted president’s rhetoric on voter fraud despite a lack of any evidence presented in their legal actions. In fact, the Cybersecurity and Infrastructure Security Agency declared the 2020 election “most secure in American history”.

Before the election, we expressed concern about how the political polarization, further exacerbated by a acerbic campaign, might undermine faith in democracy and the democratic institutions. The fact that many South Dakotans adopted the president’s belief on systematic election fraud, despite the fact that there is no evidence, indicate potential for some long-term consequences for the country and the quality of our democracy. Democratic governance not only requires that institutional arrangements allow for the fair election of policy makers and for legal restraints on their power to be put in place, it also requires both citizens and office holders to accept the outcomes of elections. Governance simply becomes impossible if the acceptance of electoral outcomes is conditioned upon a person’s partisan self-identification. It is safe to say that the actions of the president, his staff, and allies in media have successfully sowed widespread mistrust of our electoral institutions over the past several months. What is unknown is how durable this mistrust will prove to be. Hopefully, this mistrust will ebb as the Biden administration takes seat and that electoral reforms can be enacted to bring greater transparency and higher standards to help allay the fears of many Americans in how elections are conducted.