The South Dakota Voter Survey was conducted in the first two weeks of October by The SDSU Poll, a research group housed in the School of American and Global Studies at South Dakota State University. Our survey of 485 registered voters in South Dakota asks respondents about their impressions of several political figures including the presidential candidates, South Dakota’s congressional delegation, and the governor. “Feeling Thermometers” are commonly used by political scientists to measure support of political figures, since it is a very intuitive and sensitive measurement. A score of 100 means a respondent has the warmest of feelings towards an individual, a score of 0 the coldest feelings, with 50 being neutral. The margin of error is +/- 4.5%, on par with other state-wide polls.

Donald Trump Has Substantially Less Support than All Other Republicans Polled

South Dakotans are relatively cool towards President Trump, especially compared to other prominent Republicans. Trump’s “feeling thermometer” is at 42 amongst all South Dakotans, with Senator Rounds and Thune measuring 47 and 51, respectively (within the margin of error), Governor Noem at 49, and Representative Johnson clearly separated from the rest at 57. While it is unsurprising that Vice President Biden ranks at the bottom, his rating was just under 40, within the margin of error when compared to the president. While this in no way suggests that Biden is within striking distance of the president in terms of the electoral results, it does show that South Dakotans have clear issues with certain personal traits of the president relative to other top elected officials. In the end, we fully expect the president to carry the state handily, but his margin of victory will likely be less than his 2016 showing (we will address this specifically in future press releases). To better understand where the president’s support is soft, we have parsed out registered voters by party identification. 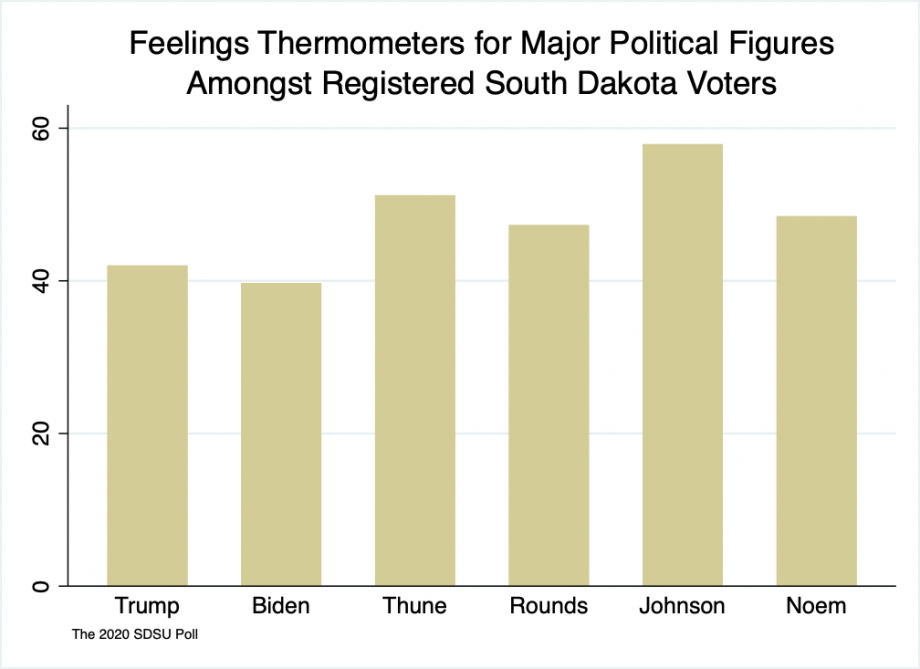 Republicans Are Uniformly Supportive of Their Elected Officials

Governor Noem shows the highest support amongst the state’s Republicans with a rating of 78. Trump, Thune, and Johnson are all rated at 75, while Rounds keeps a strong rating of 71. As we would expect, Vice President Biden has relatively low marks, with a score of 14. As we show below, this pattern amongst Republicans is in stark contrast to Democratic voters who range more widely in their assessments of Republican office holders. 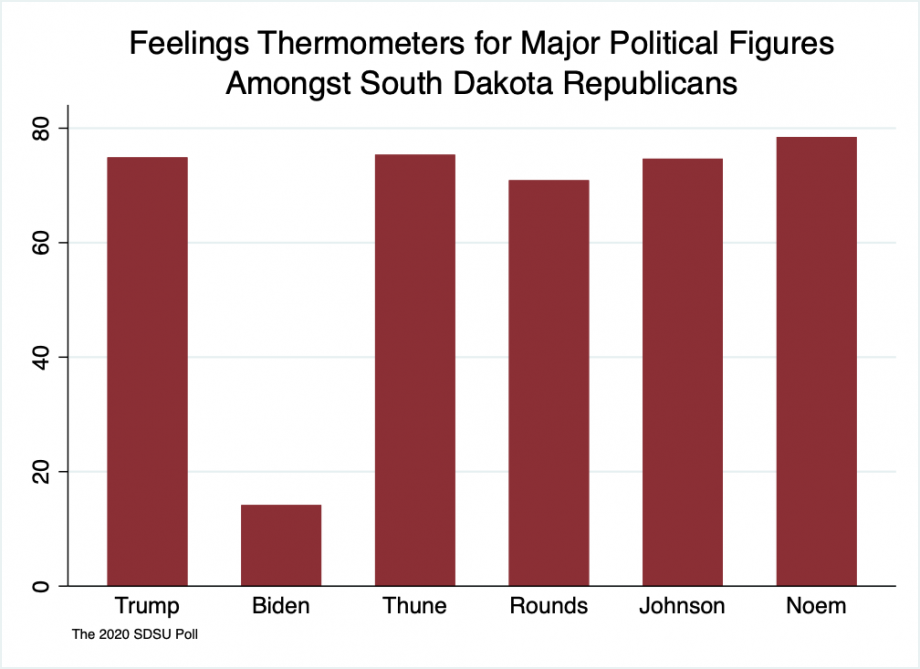 Unsurprisingly, Biden polls strongly amongst the state’s Democrats with a score of 79, statistically tied with Governor Noem’s support amongst Republicans. When we turn to Democrats’ support of Republicans, it becomes apparent that some Republican office holders have a fair degree of bipartisan support. Representative Dusty Johnson does remarkably well with a mean rating of 39. Senators Thune and Rounds are once again very close to one another at 22 and 19, with the governor and president trailing far behind at 10 and 3 respectively. Since coming to Congress in 2019 and holding a strongly conservative voting record, Johnson has actively built a reputation as a member who seeks bipartisan support on legislation as a member of the “Problem Solvers” caucus, a bipartisan working group in the House. He is also likely benefiting in that he has no Democratic rival in his reelection bid, allowing him the luxury of not having to engage in explicitly partisan terms in front of the electorate. Conversely, Governor Noem has very closely tied herself to the president. It would seem that this association is harming her standing amongst Democratic citizens of the state. 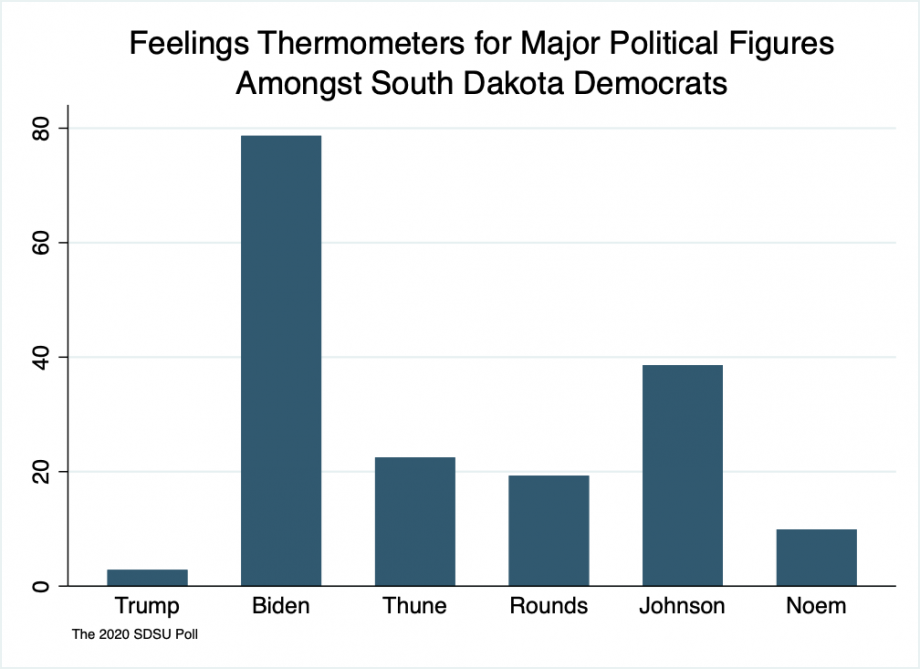 Perhaps some of the most surprising results to come from our poll thus far is how well Vice President Joe Biden polls amongst the state’s independents. As we discussed above, Johnson’s well-cultivated bipartisan approach is paying dividends, making him the highest rated politician in South Dakota this election cycle amongst independents with a rating of 52. For similar reasons, Joe Biden is polling strongly amongst the state’s independents with a rating of 45. Ideologically, Biden has cast himself as more centrist than virtually all of his rivals in the Democratic nomination, and during the general election he has been trimming towards the political center, while President Trump has taken a “rally the base” approach to his campaign. This could be costing the president, as his rating among independents is 25, the lowest of the lot. The remaining Republicans, Thune, Rounds, and Noem, have rather close thermometer ratings of 39, 36, and 37, respectively. 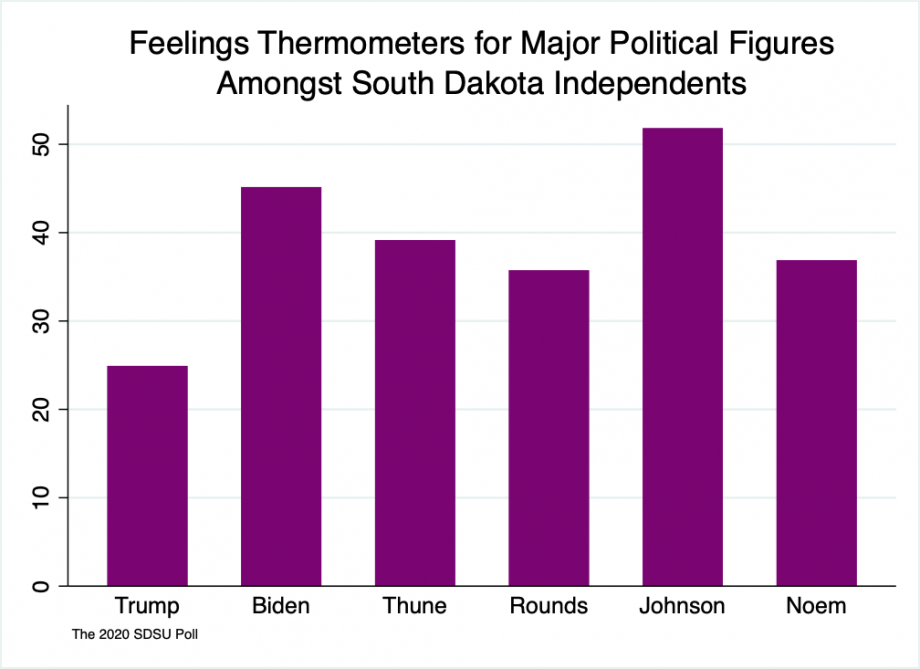 Note, we also compared male and female respondents on their ratings of each of these politicians. Those differences were not statistically significant in simple bivariate analysis.