The South Dakota Voter Survey was conducted in the first two weeks of October by The SDSU Poll, a research group housed in the School of American and Global Studies at South Dakota State University. The margin of error is +/- 4.5%, on par with other state-wide polls.

In yesterday’s press release we explored some dimensions of political division that define the South Dakota electorate. It is patent that partisan self-identification is the primary lens by which voters view the world, interpret events around them, and ultimately act upon in the voting booth. Yet, there are other divisions that are clearly shaping our political sensibilities, and ultimately our opinions on policies or evaluations of political figures. Today, we dig deeper into some of these other divisions on a handful of salient issues. In general, we find the most important divisions apart from partisanship to be the rural vs urban and evangelical vs non-evangelical dimensions.

Despite the fact that South Dakotans are generally in consensus and supportive of a somewhat open immigration policy, some divisions exist when it comes to pathways to citizenship to those who have entered the country illegally. Starting with the ubiquitous West River vs East River divide that is ascribed to virtually all facets of life here, we see that there is indeed a bit of daylight between the two sides of the state; with the west taking a slightly more conservative position. Attitudes towards illegal immigration are also shaped by a person’s place of residence: city or suburb, small town, or rural area. Here, the effects have a greater impact than the west river-east river divide. We suspect that what is largely underpinning the east-west division is in fact a rural-urban division as the western half of the state is less densely populated than the east by a fair margin. Nevertheless, only more sophisticated multivariate analysis will answer this question more definitively. We find that the greatest divide on this issue is between those that identify as born-again Christians with a mean score of 3.5, and those who do not showing a mean score of 5.2. We suspect that this division is because many born-again Christians are taking strong cues from national-level politicians, such as President Trump, who have strong anti-immigration stances. 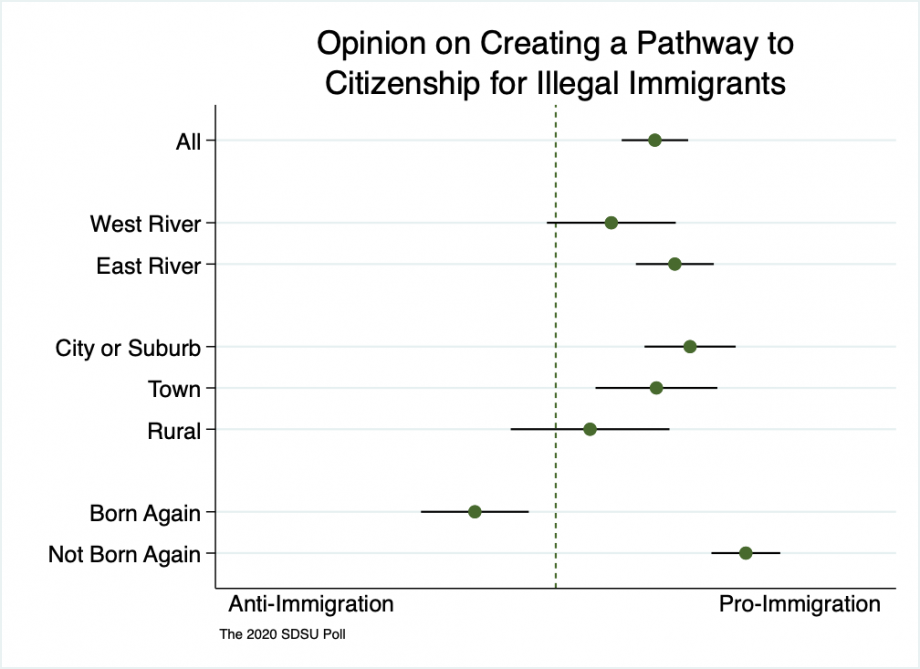 A Rural-Urban Division on Trade is Apparent

Opinions on trade agreements also show important divisions on the rural-urban dimension. We find some difference between west and east river; but again, the rural-urban divide is more clearly defined, and is likely lurking beneath the west-east divide. We suspect that this is largely due to the salience of trade amongst the state’s farming communities. In general, the benefits of most trade agreements tend to be rather diffused. Even though the economy overall benefits under freer trade, most of those benefits are hard to see. Perhaps more importantly, the costs can be very specific and deeply felt; such as a company moving production facilities abroad. An important exception to this is the ag economy. Here, it is patent that trade is a huge revenue source for many agricultural commodities. Grain farmers and others in the rural communities are keenly aware of this fact and their attitudes on trade drive up the value rural South Dakotans see in more trade agreements, even though that is largely counter to the messaging from Republican circles that has been critical of various trade agreements. While the rural-urban division on trade is driven by clearly perceived economic interests, the evangelical division is more likely an artifact of partisan messaging. All said, though, there is still a fair amount of consensus on this particular issue. It’s just that there are some interesting subtleties that are informative about the determinants of economic policy preferences. 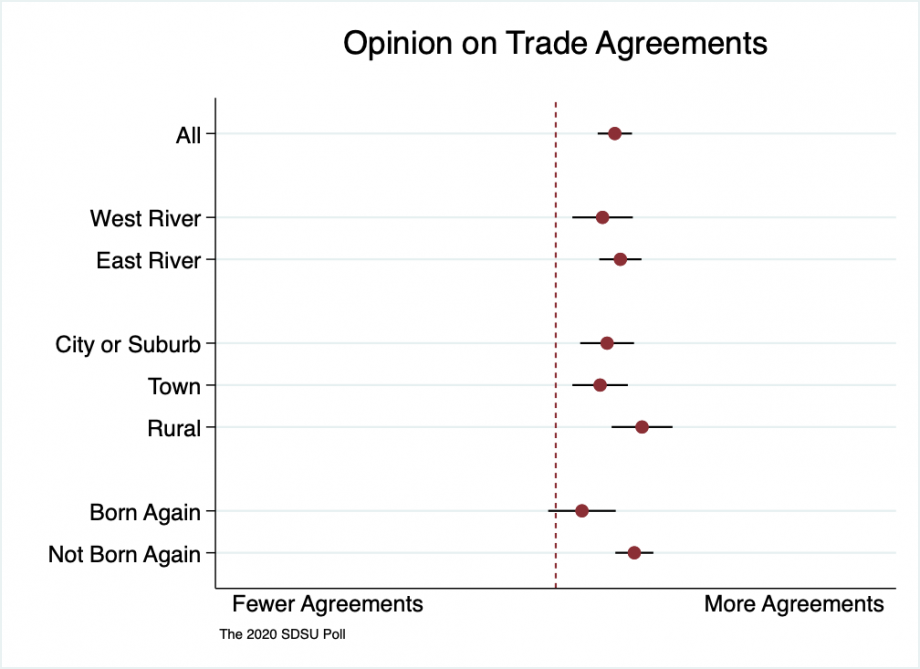 Some of the sharpest divisions in the state’s electorate come on the question of a mask mandate. Overall, South Dakotans are supportive of requiring that masks be worn in stores, businesses, and other public spaces despite the uniform opposition from state-wide office holders and most legislators. It is of no surprise that such a mandate is more popular in the urban areas of the state; support is at 64% in the cities as opposed to 44% in rural areas. Not only did our urban centers see the first mass outbreaks of COVID-19, but from the earliest days of the pandemic, a mask mandate has been cast as an explicitly urban issue by national politicians. That early messaging was likely instrumental in setting people’s preferences on the matter early on, making movement away from those prior convictions slow as the virus moved throughout the nation. The results also show that born-again Christians are strongly opposed to a mask mandate; 64% opposed a mask mandate relative to just 19% opposition in the rest of the sample. While evangelical identity is not a perfect proxy for partisan identification, it is highly correlated. Moreover, as we have shown, evangelicals are a key constituency of Governor Noem and they are particularly receptive to the cues that she has given on this particular issue, consistently advocating a laissez-faire approach to nearly every personal mitigation approach. 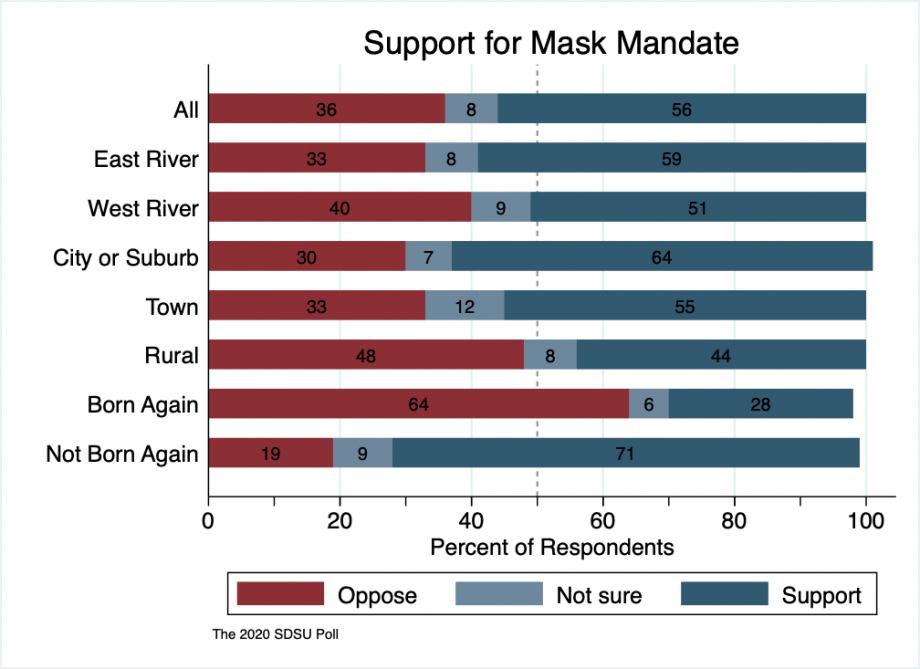 On the Prospect of Taking a COVID-19 Vaccine

Perhaps the most perplexing finding of our poll is the clear politicization of respondents attitudes on receiving a vaccine if one should become free and widely available. Some of the divisions we’ve seen in other policies covered here have nearly vanished. For example, the west river-east river division is virtually absent, well within the poll’s 4.5% margin of error. The urban-rural dimension is also muted. While there is still a difference in the intensity of opinion, the sharp urban-rural split we saw on opinions about a mask mandate is much lower, with a majority of residents in all geographic categories showing a willingness to get vaccinated. The evangelical dimension remains quite strong, with only 39% of evangelicals willing to take a potential vaccine as opposed to 71% of non-evangelicals wanting to take it. As in the other policy preferences we’ve covered above, we do not believe this is something inherent to any theological belief per se; but it is because born-again Christians are the strongest faction within today’s Republican party, and are most receptive to the messaging they are receiving from Republican leaders at the state and national level on the coronavirus and all efforts to slow its growth. This nicely illustrates the powerful nature of partisan identity in shaping citizens’ attitudes about matters we would otherwise suspect are non-political. 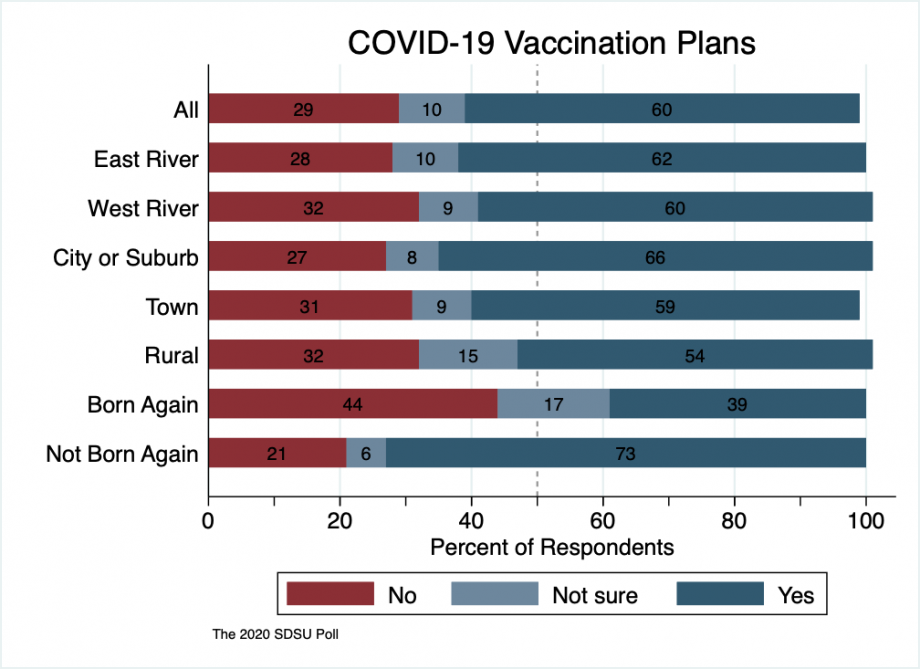