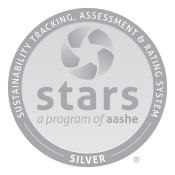 “A key takeaway from the report is how broad and encompassing sustainability is. It shows how sustainability truly goes beyond just recycling,” continued McLaughlin, who noted more than 100 people contributed to the report. “Efforts from all across campus, whether in academics, policymaking, operations or student engagement, all are important for creating a sustainability culture. I hope departments take a chance to review the report and see where they can have an impact.”

Participants report achievements in the areas of innovation and leadership, operations, academics, engagement, and planning and administration. According to McLaughlin, SDSU earned innovation points, which are considered extra-credit points, for having a tobacco-free campus and its efforts creating the Wokini Initiative, Jack’s Cupboard and the student impact made when designing and creating Passive House built in Brookings.

The top three most improved categories since the 2016 report were:

With more than 800 participants in 30 countries, AASHE’s STARS program is the most widely recognized framework in the world for publicly reporting comprehensive information related to a college or university’s sustainability performance.

Upon the report’s submission, universities are rated based on the percentage of points earned: platinum, gold, silver, bronze and reporter. Unlike other rating or ranking systems, this program is open to all institutions of higher education and the criteria that determine a STARS Rating are transparent and accessible to anyone. Because STARS is a program based on credits earned, it allows for both internal comparisons as well as comparisons with similar institutions.