The Republican Primaries for Governor, US Senate, and US House

The Republican Party primaries in South Dakota will take place on June 7, 2022. Governor Noem, Senator Thune, and Representative Johnson are all facing challengers. A few election cycles ago, it would be nearly unheard of for so many incumbents of state-wide office to be challenged from within their own party. But given the surge of activity from the right-wing of the party, challenges from the right are increasingly common across the nation.

In our survey we included a question on respondents’ voting intentions for the Republican primary amongst likely GOP voters: “If the Republican primary for United States Senate was held today, which candidate would you vote for?” While by no means a perfect prediction of the outcome, it gives us a good sense of the various candidates’ strengths a few weeks ahead of the primary.

At the moment, the incumbent Governor, Senator, and US Representative seemingly enjoy strong support and are likely to receive the Republican nomination. Nevertheless, some voters make last-minute decisions or there could be a major “disruption” to a race creating the possibility that the primary results could take a turn between now and then. If there is any lesson to be learned from the last six years of politics, it is that primary races are increasingly difficult to predict.

Governor Noem is in a strong position for renomination. In our survey, 61% of likely Republican primary voters indicated they would vote for Kristi Noem in the Republican primary for Governor. Steven Haugaard received 17% and 22% answered that they were not sure. Despite this challenge from the former house speaker, the governor remains very popular amongst Republicans and all evidence points to her winning nomination with relative ease, barring some unforeseen event. 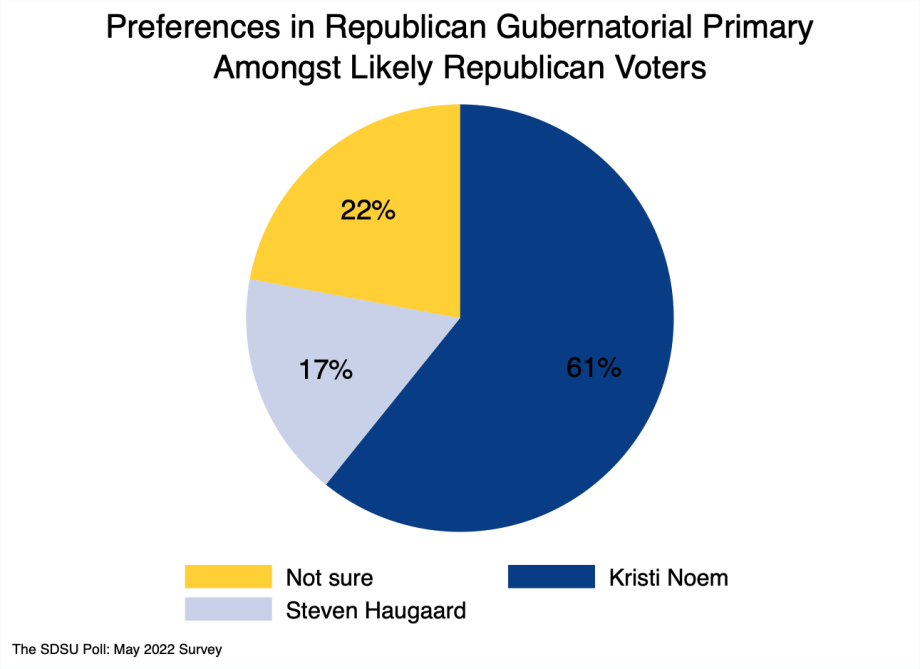 Despite a raft of undecided voters, Senator Thune is polling strong. If the Republican primary for United States Senate was held today, 46% of likely primary voters indicated that they would vote for John Thune. Challengers Bruce Whalen and Mark Mowry received support of 9% and 4%, respectively. Nearly 41% answered that they were not sure yet about their vote. Based on other questions in the survey, particularly the “feelings thermometers” that we will discuss in the next press release, we suspect that the vast majority of these undecided voters will break John Thune’s way in the primary. 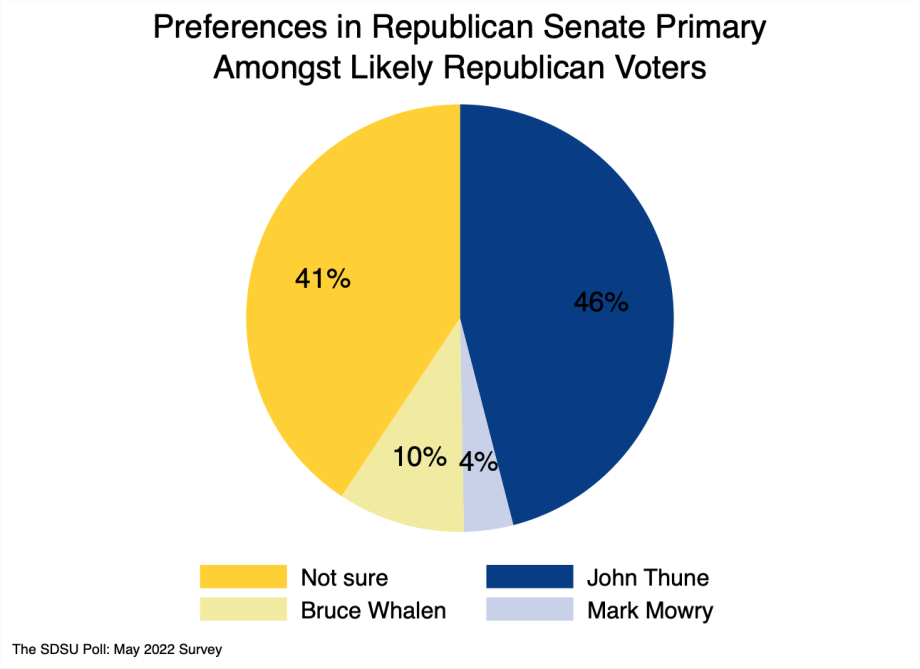 Representative Johnson is on track for renomination. Finally, we asked likely Republican primary voters about their preferences in the U.S. House primary was held today. Of these voters, 53% indicated they would vote for Dusty Johnson, just under 17% said they would vote for Taffy Howard, and 30% were not sure. Like the other incumbents for state-wide office we’ve discussed thus far, Representative Johnson is in a strong position to fend off his challenger from the right. 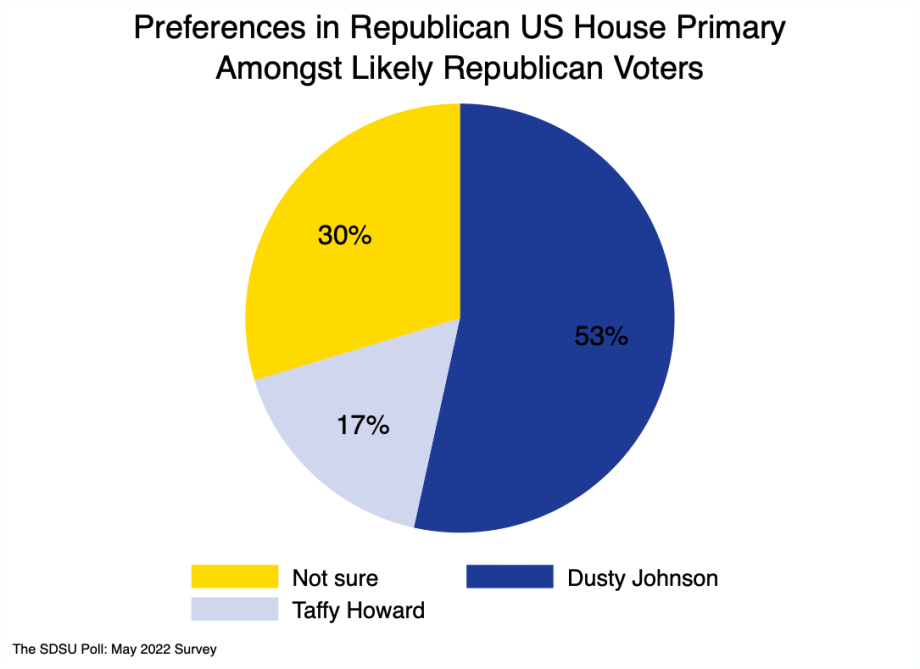 We also included questions on Attorney General Jason Ravnsborg. As nearly every reader will know, the Attorney General been subject to multiple investigations stemming from his 2020 accident in which he struck and killed Joseph Boever. On April 12th 2022, he was impeached by the South Dakota House of Representatives. His Senate trial will begin on June 21st. It will take a two-thirds majority of the Senator to remove him from office. 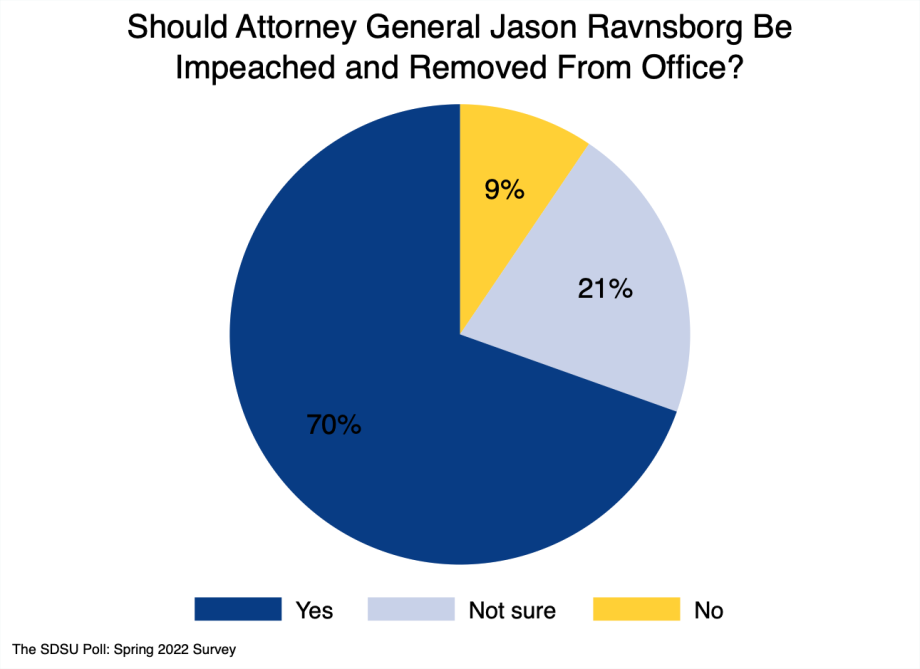 Even though the nomination for attorney general is made by a party convention, we asked likely Republican primary voters about their preferences between the declared candidates in the nomination contest. The sole challenger at the time our poll was launched was Marty Jackley, Ravnsborg’s predecessor. We were not able to include David Natvig, head of the Division of Criminal Investigation, in the list of candidates. Jackley is supported by Governor Noem, who has been demanding Ravnsborg’s resignation for quite some time. Unlike the other challengers to statewide incumbents, Jackley is not coming from the far-right of the party.

Again, the results are very one-sided. Our Republican respondents were quite harsh towards the incumbent with 61% supporting Jackley and 6% supporting Ravnsborg, with the balance undecided. Needless to say, the Attorney General is in deep trouble with the electorate. 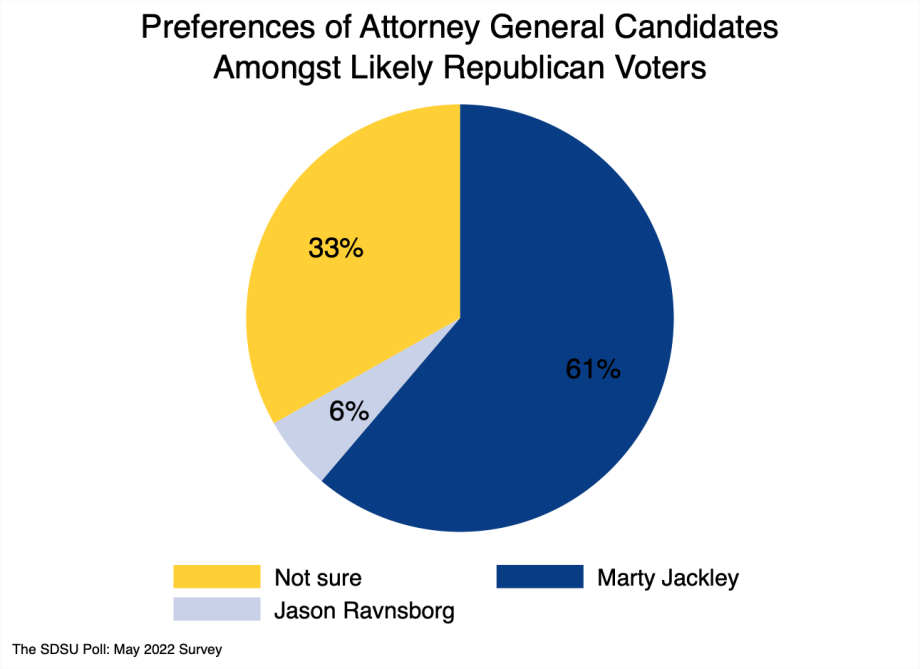 In the next press release, we will examine how prominent South Dakota politicians are faring in the eyes of the public, and how their support changed over time.