The South Dakota COVID Impact Survey was conducted from April 12 to 25, 2021 by The SDSU Poll, a research group housed in the School of American and Global Studies at South Dakota State University. A total of 3,057 registered voters in South Dakota completed our survey about the impact of the COVID-19 pandemic on their daily lives, alongside questions on political beliefs given the partisan polarization of the policy response to the pandemic. The margin of error of this survey was +/- 2 %, which is less than most state-wide polls.

The survey that we conducted in October of 2020 showed that the pandemic had a significant effect on the everyday lives of South Dakotans. Six months later, especially after the surge of COVID-19 cases in the fall and early winter, we can see a more complete picture of toll the pandemic has had on the state. The disease itself has touched almost everyone in the state in some way. Nearly 96% of our respondents reported that they knew someone who tested positive for coronavirus, while 72% indicated that a friend or acquaintance contracted it, and 65% mentioned that a family member tested positive. 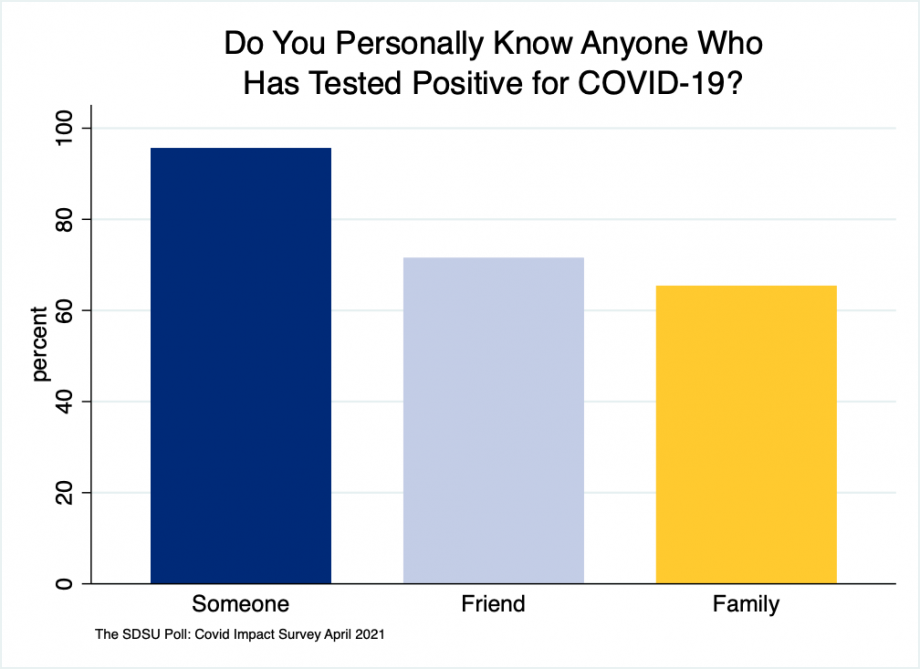 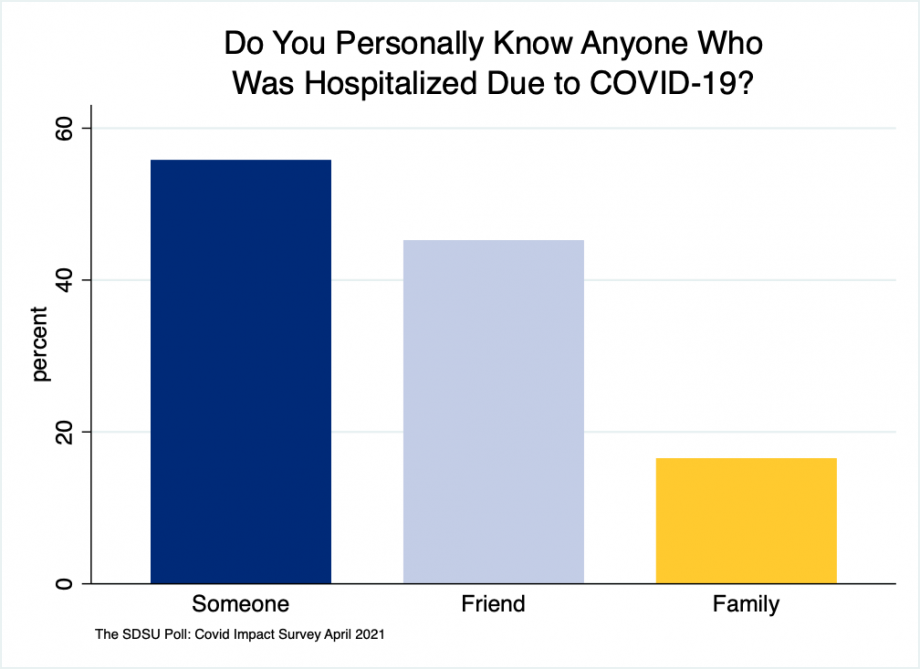 Sadly, 38% of South Dakotans know someone who has died of COVID-19, 33% said that a friend passed away from the disease, and 7% had a COVID-related death in the family. 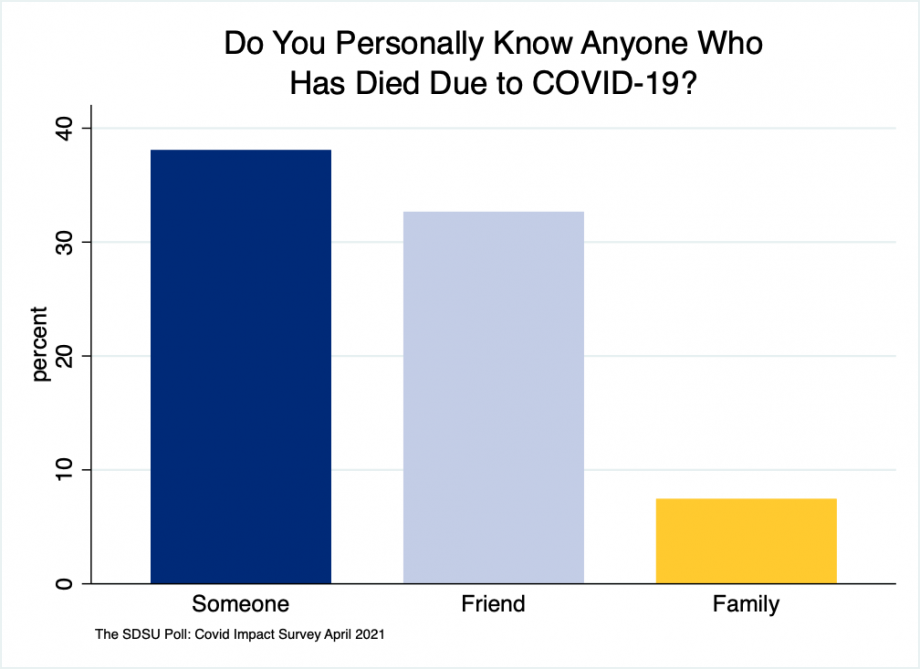 The Use of Masks

The use of masks continues to be widespread, though we are seeing some important divisions in the population on their use. This division is largely defined by the vaccination status of our respondents. Our survey was launched just as the South Dakota Department of Health announced that 50% of the state’s population had been vaccinated, so our survey is representative of both the vaccinated and unvaccinated populations within the state. Those who received at least one dose of any of the FDA authorized vaccines were far more likely to engage in any form of mitigation efforts than those who had not been vaccinated. As you can see in the graph below, 82% of those who were vaccinated reported wearing a mask “most” or “all of the time” when in public indoor spaces. Only 26% of those who were not vaccinated reported the same. 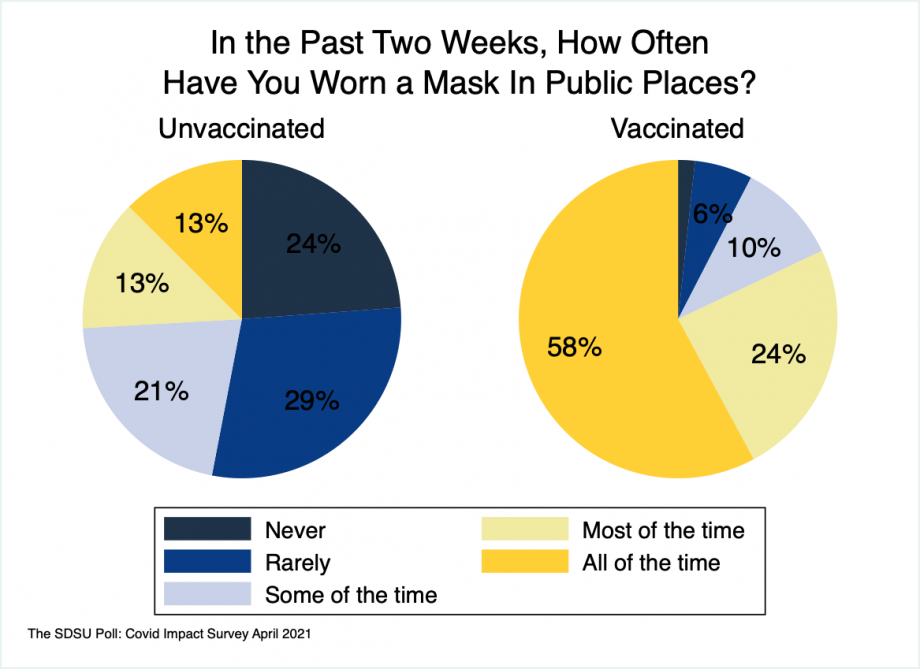 Similarly, we observed a large difference in the avoidance of large groups between the vaccinated and unvaccinated populations, though it is not nearly as stark. While 11% of the vaccinated population reported being in a large non-distanced group in the past two weeks “frequently” or “very frequently,” 46% of the unvaccinated respondents reported the same. Between the behaviors of wearing a mask and the avoidance of groups, it is clear that our attitudes and behaviors in reaction to the pandemic are largely conditioned on perception of the danger COVID-19 poses and most profoundly structured by partisanship. We will show these partisan results in future releases. 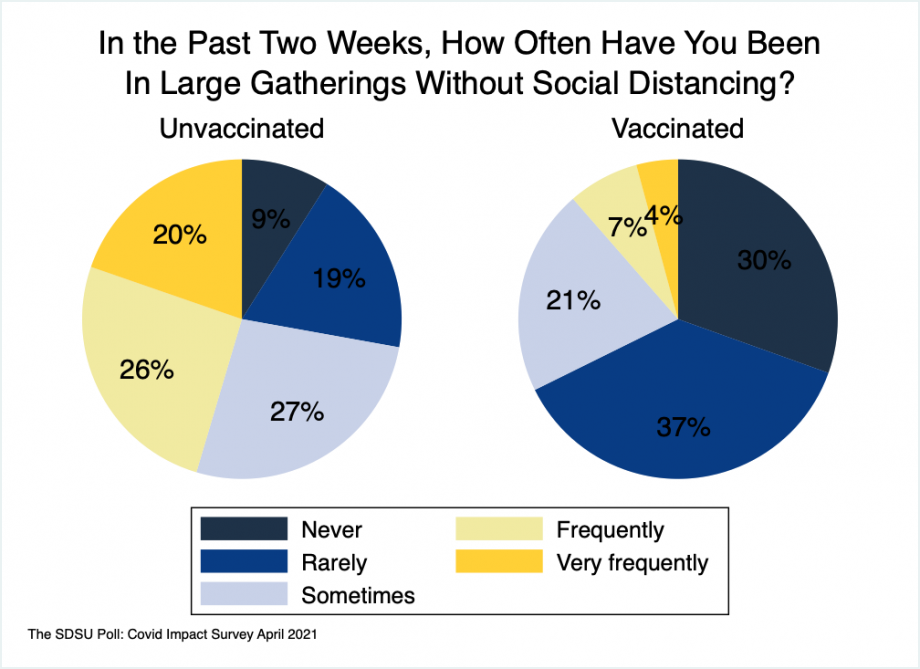 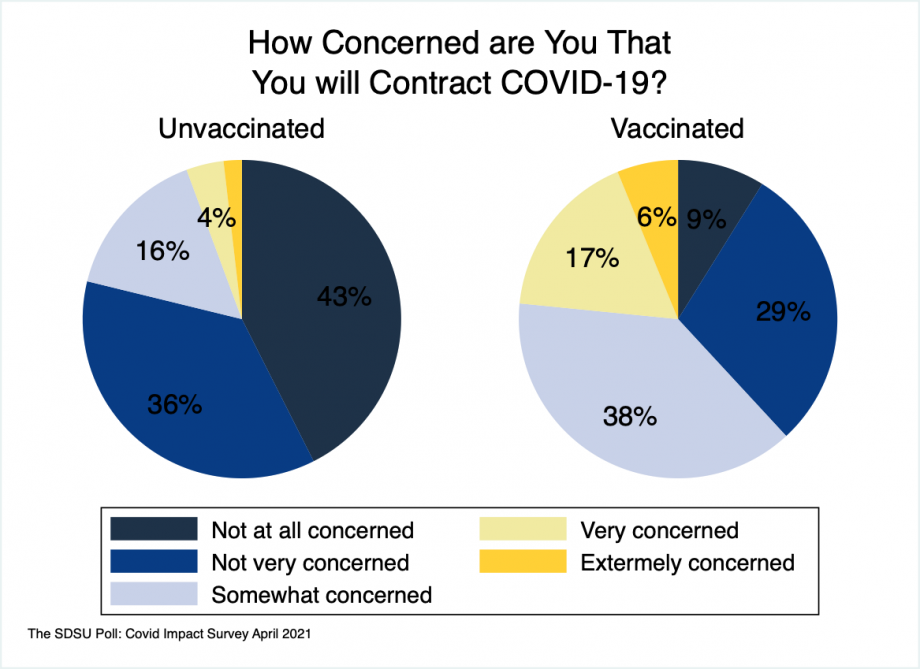 In general, our findings show that those South Dakotans who were deeply concerned about getting COVID-19 got the vaccine as soon as they could. Though they have been inoculated, they continue to show some concern about contracting the virus. Those who were unconcerned about catching the disease simply are less likely to seek out the vaccine in the first instance and remain unconcerned.

Some nations like Israel have implemented a registration system allowing the vaccinated to move more freely about the country and frequent public social spaces like restaurant, bars, theaters, and the like. However, the idea of a vaccination passport has been a politically polarizing issue in the United States. We found a similar pattern within South Dakota. While it is clear that those who have not been vaccinated would be naturally opposed to implementing a system that imposes more restrictions on themselves, we do see a fairly large degree of partisan polarization on this question. About 71% of self-identified Democrats in South Dakota are “somewhat” or “very supportive” of such a system. Coincidentally, 71% of Republicans are “somewhat” or “strongly opposed”. The partisan divide over vaccination passports follows a well-established pattern of political polarization in nearly every COVID-related policy question. 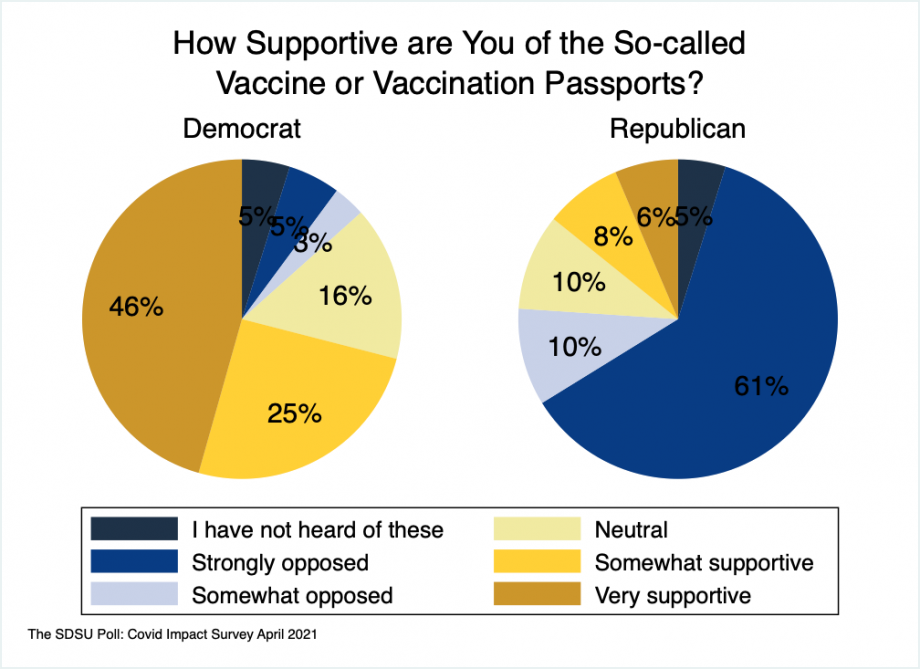 Public health officials who are trying to encourage as many people to get vaccinated as possible, are seeing some serious challenges emerging. South Dakota was very successful in the early phases of the vaccine rollout, consistently staying ahead of the national vaccination rate. However, in recent weeks, vaccinations have slowed. The challenge for health officials has been to convince unvaccinated folks to “get the jab” in order to achieve the CDC targets necessary for “herd immunity.” Tomorrow, we will delve into the so-called “vaccination hesitancy” and explore the role of messengers in reducing people’s hesitance.