The South Dakota COVID-19 Family Impact Survey 2021 was conducted from July 31st to August 14th, 2021 by The SDSU Poll, a research group housed in the School of American and Global Studies at South Dakota State University. This survey builds upon similar surveys conducted by The SDSU Poll in October 2020 and April 2021. In this poll, a total of 573 registered voters in South Dakota answered questions about the impact of the COVID-19 pandemic on their daily lives. The margin of error of this survey was +/- 4 %, on par with other state-wide polls.

Across the United States, many state and local level governments are working to increase the number of vaccinated people in order to bring the pandemic under control. Originally, encouragements from doctors and community leaders were used to convince people to receive a COVID-19 vaccination. Nevertheless, it appears that these attempts have only been partially successful. The pace of vaccination has slowed down and only about 55% of the eligible population has been fully vaccinated. As a consequence, officials across the country have started using a variety of approaches to boost vaccination. Some states, such as Ohio, started a vaccination lottery, others are offering various financial incentives, tickets to sporting events, or fishing and hunting licenses. Other states, such as Hawaii, used a different approach and promise to relax restrictions if a certain vaccination threshold has been reached.

In South Dakota, encouragements from public figures and public health officials have been used to encourage vaccinations. Nevertheless, only about 57% of eligible population has been fully vaccinated and most of the unvaccinated population shows little interest in following suit. It remains unclear if South Dakota officials will follow other states and use additional measures to boost vaccination rates. Nevertheless, it is worth asking how supportive South Dakotans are of potential incentives or penalties to increase vaccination rates in the state.

As a part of our survey, we examined the support of eight different approaches to increasing vaccination rates—four incentives and four penalties. Our goal was to gauge support for different approaches to increase COVID-19 vaccination rates that are being considered and/or implemented elsewhere, not to advocate for any particular policy. Undoubtedly, implementation of any of the approaches would be complicated and would likely include exemptions. Some of the policies we included in our survey, such as commercial flying restrictions, are administered by the federal and not state governments. Each of these graphs represent the average position of the given group on a five-point scale ranging from "strongly oppose" to "strongly support" on eight questions we asked in our August survey. 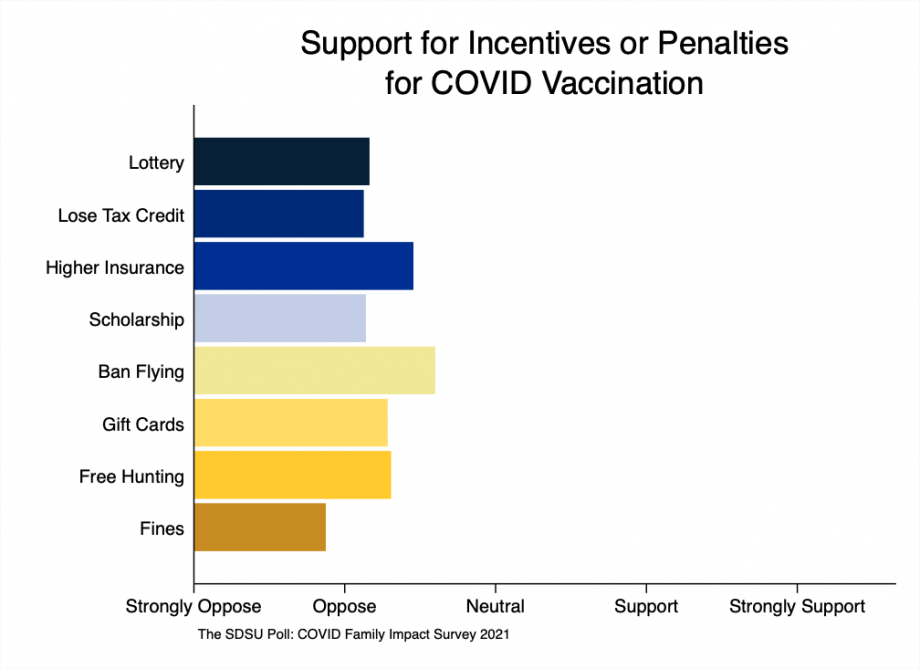 In the population overall, support for any kind of incentives or penalties is rather low. Interestingly, the approaches to increasing vaccination that received the greatest and lowest support among South Dakotans were both penalties. The two policies with greatest support were banning flying on commercial flights for people who refuse to get vaccinated and an increase in health insurance premiums for people who refuse to get vaccinated. It is important to note that the restriction on flights would have to be administered at the federal and not state level. Prepaid gift cards, and fishing or hunting licenses for vaccinated people were third and fourth most popular approaches, with almost identical support. Educational scholarships for vaccinated children, a special lottery for vaccinated people, and no child tax credit for parents who refuse to vaccinate their children were ranked as fifth, sixth, and seventh in popularity. It is important to note that the difference in support between these three approaches were small. Levying a financial fine for people who refuse to get vaccinated received the lowest support. 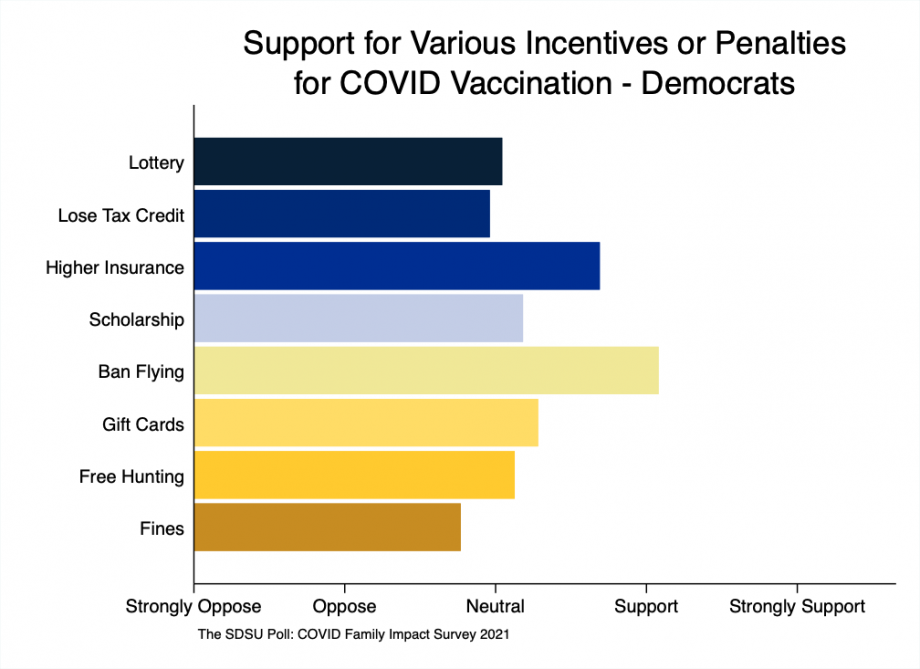 As we noted, the COVID-19 pandemic has been politicized, and thus it is unsurprising that we see differences between Republicans and Democrats in South Dakota. Yet, Democrats are not enthusiastically supporting most of these policies. They are most supportive of a policy that would ban flying on commercial flights for people who refuse to get vaccinated, followed by an increase in health insurance premiums for people who refuse to get vaccinated. As we will see below, the intensity of this support does not match the intensity of opposition that Republicans have on this question of incentives or penalties for vaccination.  Democrats are neutral on all the remaining incentives or penalties, with the imposition of a fine for people who refuse to get vaccinated receiving the lowest support. 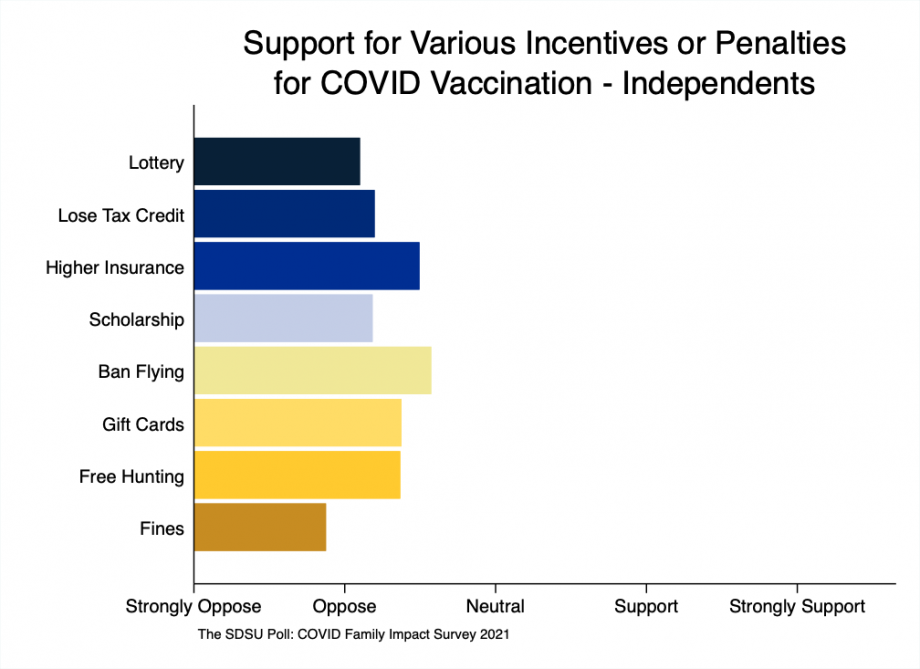 On balance, independents are uniformly opposed to all the proposed incentives and penalties. Independents show less opposition towards policies that would ban flying on commercial flights for people who refuse to get vaccinated and the lowest support for imposing a fine for people who refuse to get vaccinated. However, the overall support of these policies are lower than among the Democrats and the differences in support between the different approaches were relatively small. 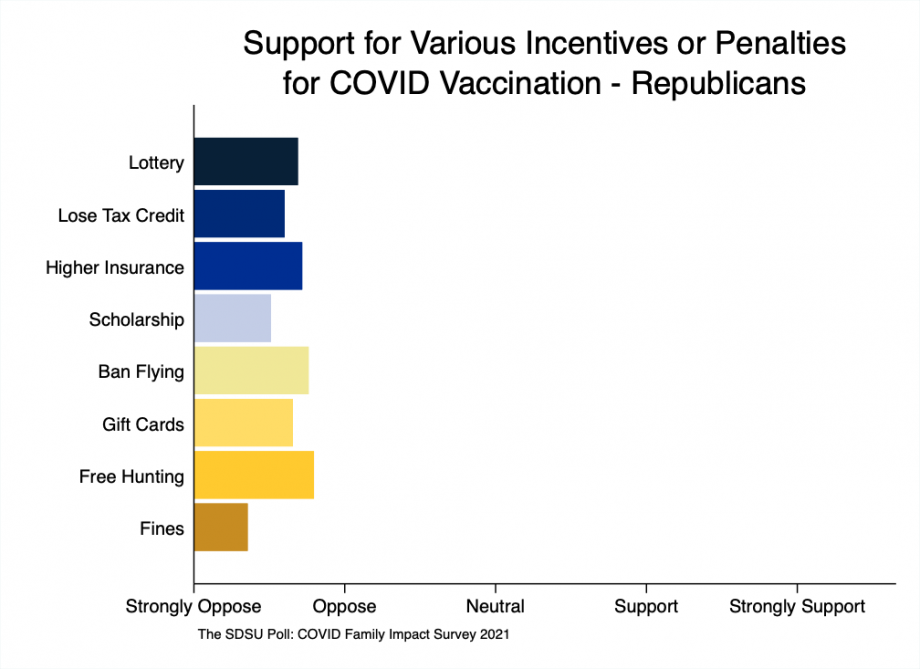 Overall, Republicans show strong opposition towards all the policies we asked registered voters about in this survey. While there is slightly more support for free hunting and fishing licenses than the imposition of fines, the difference almost statistically indistinct. Simply put, Republicans are rather opposed to any incentive or penalty proposal seeking to boost vaccination rates. This is consistent with state political leadership on the issue who have largely refrained from engaging in highly visible shows of support for vaccination efforts than in other Republican states. We must note that this is not an opposition to public health messaging promoting vaccination per se, but a belief that the state should not be using promotion methods beyond persuasion.

In the next few press releases, we will continue to explore the politics of COVID policy. In particular we will look at the rights of patients and health care providers, family disagreements on COVID related issues, and questions regarding the origins of COVID-19.