Digital bookplates honor library friends whose contributions supplement and enhance collections, spaces, and services at Briggs Library. These bookplates also recognize gifts to the library made on behalf of a family, friend, or colleague for special occasions such as a significant accomplishment, graduation, birthday, anniversary, retirement, or memorial.

With these gifts, Briggs Library continues to provide excellent resources for scholarship and research to SDSU students, faculty, and the wider community. Thank you to our supporters!

If you are interested in donating to the library, please call 605-688-5107, email blref@sdstate.edu, or see the Briggs Library Wish List. 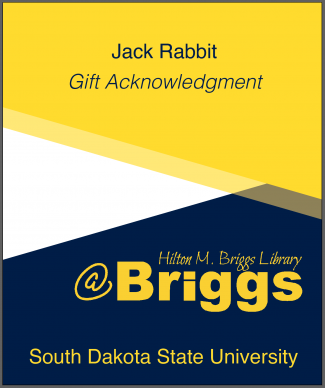 Gifts to the Library 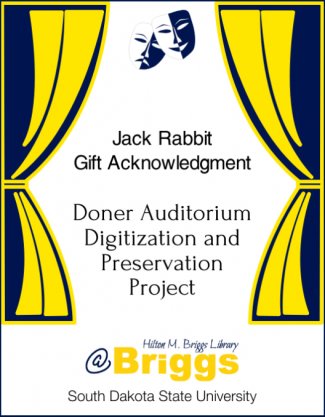 Doner Auditorium, built in 1912, was home to hundreds of State University Theatre and Prairie Repertory Theatre productions. The backstage areas held nearly four decades worth of inscriptions from theatre students who covered the walls, ceilings and other surfaces with their signatures, dates, season lineup schedules, quotes and favorite lines from plays. In an effort to preserve this unique institutional history, the SDSU Archives & Special Collections began the Doner Auditorium Digitization and Preservation Project to photograph these spaces for a special online gallery. Doner Auditorium ceased being used for theater shows in 2019 when the new Oscar Larson Performing Arts Center opened. Read more about the project in this 2019 article and 2020 article, and about the auditorium's history. These digital bookplates recognize donors whose gifts support this project. 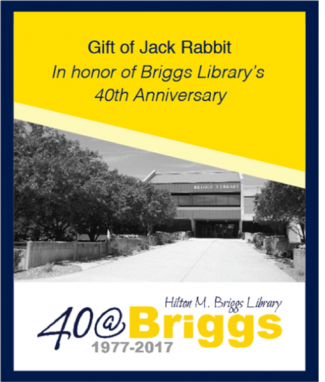