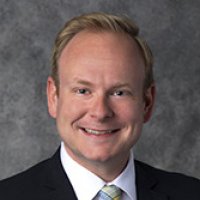 An accomplished conductor, educator, and writer, Jacob Wallace is an emergent personality in the performance of contemporary instrumental music. His efforts to present innovative and approachable programming of new works have brought modern trends to atypical places, with performances being lauded by audiences and professionals alike. Ensembles under his direction have presented world, national, and regional premieres by such composers as Jocelyn Hagen, John Mackey, Michael Markowski, Tina Tallon, and William Linthicum-Blackhorse among others.

Dr. Wallace is currently Associate Professor of Music at South Dakota State University, where he serves as Director of Concert Bands. In this capacity, he conducts and supervises instrumental ensembles; teaches coursework in conducting, literature, and education; and administrates the wind ensemble activities of the School of Performing Arts as a whole. Prior to this, he served as Director of Bands at Southeastern Oklahoma State University, where his active efforts included the new music initiative projekt (n), which engaged student musicians directly with composers in collaborations on new works for wind ensemble. His writings on music have been published in nine volumes of GIA’s Teaching Music Through Performance in Band series and he has become known for a series of engaging program notes, commissioned directly from a number of composers, which have helped fresh audiences understand new works on their first listening. His research in the area of diversifying composer representation in large ensemble literature has been presented at The Midwest Clinic, national conferences of the College Band Directors National Association, and other workshops and conventions. During summers, has served on the conducting faculty of the Cortona Sessions for New Music in Tuscany, Italy.

Dr. Wallace holds the degree Doctor of Musical Arts from The University of Georgia. He also has degrees from Baylor University and the University of Nebraska-Lincoln. His principal conducting teachers have been John Lynch, Kevin Sedatole, and Carolyn Barber. He remains active as an adjudicator, conductor, and clinician throughout the United States and maintains professional affiliations with the College Band Directors National Association, the National Association for Music Education, and the South Dakota Bandmasters Association. He is a member of the Phi Beta Mu International Bandmasters Fraternity as well as the Pi Kappa Lambda music honor society and holds honorary membership in the Tau Beta Sigma National Honorary Band Service Sorority and the Kappa Kappa Psi National Honorary Band Fraternity.