Beginning in 2018, faculty and staff from the College of Pharmacy and Allied Health Professions at SDSU, alongside the South Dakota Department of Health, began a five-year project to identify barriers and develop solutions to improve the care of South Dakotans with diabetes, heart disease, and stroke. This project was created in response to a call-to-action from the Centers for Disease Control (CDC) through CDC-1815.

Central to the project is exploring the role of the pharmacist as a member of the healthcare team and how that role can be expanded, particularly as it relates to a service called medication therapy management.

Through medication therapy management, or MTM, pharmacists can help patients improve their medication treatments and processes. According to the American Pharmacist Association, there are five core elements to MTM: 1. Medication therapy review, 2. A personal medication record, 3. A medication-related action plan, 4. Intervention or referral, and 5. Documentation and follow up.

From a patient perspective, MTM involves a pharmacist sitting down with a patient and counseling them on various aspects of their medications, including but not limited to the medications themselves, adherence practices, and a variety of scenarios involving different diagnoses, taking multiple medications, or other situations a patient may experience. The initial visit may take thirty minutes to an hour, while subsequent quarterly or monthly visits are typically shorter.

During Year One of this five-year project, the project team, led by Dr. Sharrel Pinto, conducted a landscape analysis in which they interviewed South Dakota patients, practitioners, and payers to gauge the state of care and of access to care in South Dakota, including MTM services. 50 patients, 69 practitioners (including pharmacists and other healthcare providers), and 8 payers from across the state were interviewed.

During these interviews, each of the different participant groups provided valuable information on the current state of healthcare in South Dakota, as well as on ways it might be improved through, for example, increasing familiarity with MTM and expanding the role of the pharmacist. 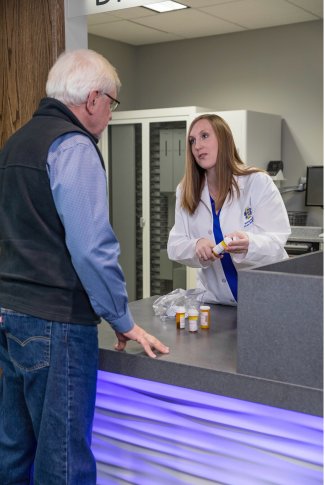 The team described the patient interviews as “incredible and, at times, emotional discussions about their health care journeys.” During the interviews, many patients spoke about concerns regarding struggles to afford their medications. The project team highlighted one patient who “said that they ‘had a choice between food or medicine to treat their diabetes’ because the medication was ‘hundreds of dollars,’ leading to disease complication and eventual amputation.”

The patients also discussed difficulty accessing the care that they need. Team members noted that some rural patients, for example, might have to travel more than 50 miles to see a primary care provider, like a doctor, while getting to a specialist might be even more difficult. Pharmacists, however, are much more accessible since the majority of South Dakotans live within a 15-minute drive of a pharmacy.

The patient interviews also highlighted a lack of education on the various ways a patient’s life might change after a diagnosis and on the lifestyle changes they should be making in order to improve their quality of life. Some patients reported their cases worsening after they “didn’t pay attention to the doctor” or that they “didn’t know they had high blood pressure” until they had a heart attack. The project team indicated that services like MTM might help resolve many of these issues.

When interviewing practitioners, the team found that their responses highlighted the “challenge of making healthcare and preventative services affordable to patients.” Some strategies to resolve this issue have included using e-technologies to communicate with other members of the healthcare team, as well as with patients.

Overall, the practitioners indicated “a strong desire to expand interdisciplinary collaboration among physicians, APPs [advanced practice providers], and pharmacists as well as a need to better understand the scope of practice and range of services offered by practitioners from various disciplines.”

Meanwhile pharmacists wished to receive more education on MTM, as many “acknowledged that elements of MTM exist within their sites, however a lack of understanding persists.” Overall, the project team found that education on both MTM and the role of the pharmacist are needed.

When the team interviewed payers, they asked about billing and reimbursement mechanisms, focusing in particular on those for pharmacy services. They reported that payers “understood the unique role that pharmacists play,” both as a more convenient access point for patients than other practitioners, as well as a way to share the burden of meeting patient needs.

Discussing a patient’s journey and disease management, one participant noted that, “Traditionally, this has been the role of only the physician. This isn’t working. Pharmacists could take the burden off of providers, allowing them more time to provide valuable patient visits.” Along with patients and practitioners, payers also recognized the potential to increase the role of the pharmacist as a way to improve healthcare access and services.

For the project team, Year One of the project highlighted this potential of the pharmacist. As a member of the healthcare team that is more accessible to patients than other practitioners, pharmacists stand in a unique position to provide much needed services. One of these includes MTM, a service designed to aid patients in disease management, but one that is being underutilized due to a lack of education on both MTMs and the various services that pharmacists can provide.

In Year Two, the project team plans to “focus heavily on development by educating and engaging the patient, practitioner, and payer/others groups on the creation of a community-based practice model of care.”