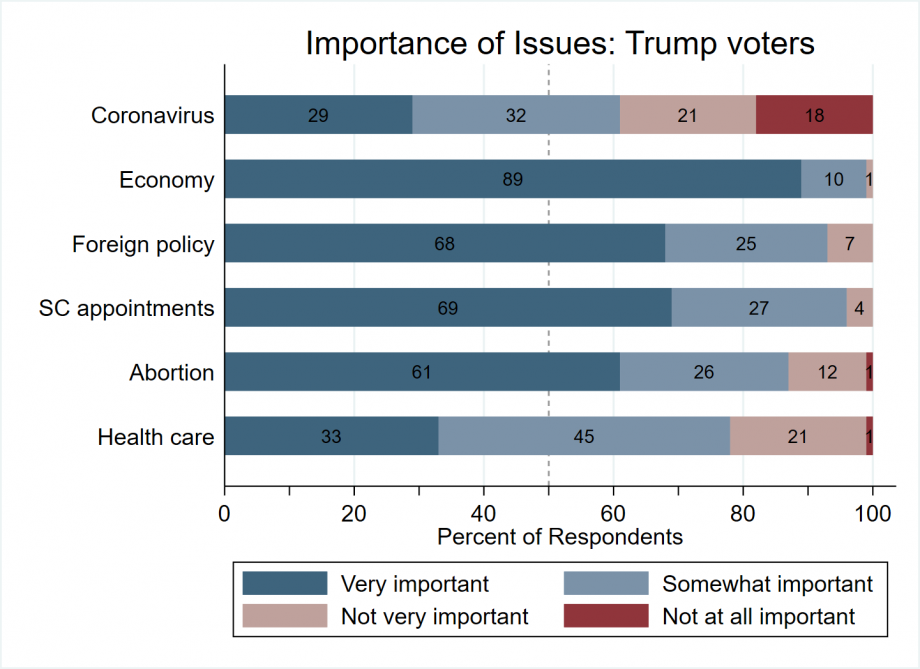 The survey results showed that the economy was by far the most important issue for Trump voters in South Dakota. 89% of South Dakotans who voted for Trump listed concerns about the economy as very important and 10% as somewhat important; not surprising as the Trump campaign made the sustained economic growth of the pre-COVID economy a center point of their messaging. Supreme Court appointments and foreign policy were also very important to 69% and 68% of Trump voters, respectively. The composition of the Supreme Court has long been a highly salient matter to the Republican base. President Trump installed three judges to the Supreme Court, which cemented the ideological balance of the court for years to come, thus fulfilling a decades long effort of Republicans.

The survey results also showed the importance of abortion for Trump voters; 61% mentioned abortion being very important and 26% somewhat important in their decision. Given the fact that Republicans in general and in particular evangelicals and born-again Christians tend to lean towards political conservatism, the importance of abortion in the decision to vote for a candidate who embraced a strong pro-life platform is consistent with expectations. 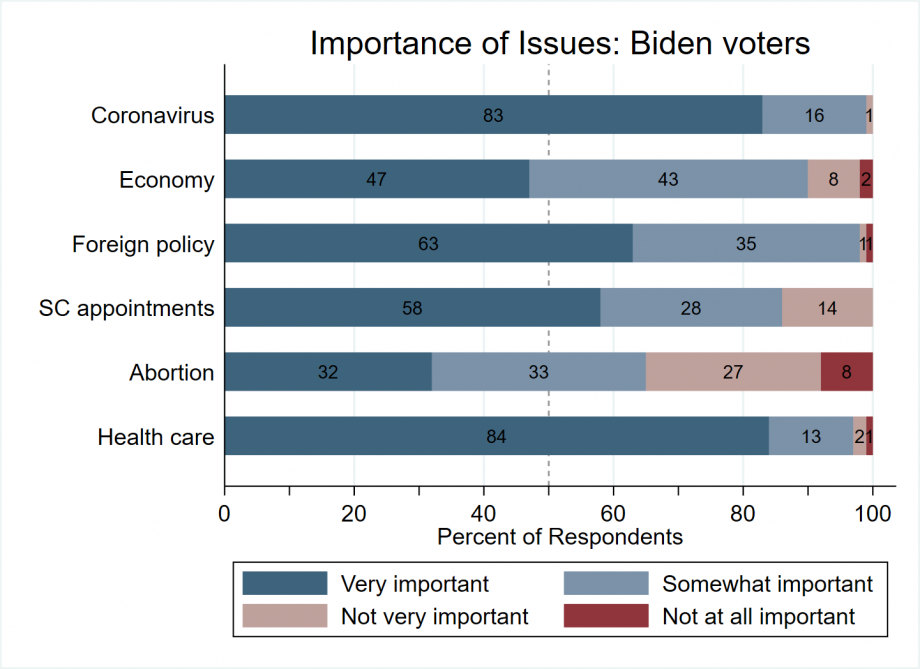 While health care and the coronavirus pandemic were of little importance for Trump voters, these two issues were listed by Biden voters as the most important when deciding who to vote for in this election. 84% of Biden voters mentioned health care as very important and 83% coronavirus as very important. These results are consistent with our previous findings that Democrats have to a greater extent embraced the preventative measures suggested by the CDC and are more willing to get vaccinated against coronavirus once the vaccine becomes available.

Foreign policy and Supreme Court appointments also mattered to Biden voters, with 63% and 58% listing them as very important, respectively. Given the fact that President-elect Biden’s campaign focused on the coronavirus pandemic and that Democrats have not consistently placed judicial nominations at the center of their campaign rhetoric, the relatively lower importance given to Supreme Court nominations is unsurprising. Yet, the timing of Justice Ruth Bader Ginsberg’s passing and the talk of possible “court packing” plans under a new administration served to activate Democrats to a fair extent on this issue, though it still did not rise to the level of concern expressed by Republicans.

A Large Portion of South Dakotans Contributed to Some Political Cause

As has been widely reported in the popular media, the 2020 election saw a sharp rise in overall voter turnout relative to 2016 in both parties. Importantly, other forms of participation grew as well. Contributions to candidates, parties, and other political organizations have been steadily increasing nationwide for some time, largely as a consequence of the growing political polarization. Roughly 12% of citizens contributed in the 2016 election, double the proportion in 1992. The 2020 election looks to be on track to shattering that record, though there are no national figures of academic surveys available on this yet. Overall, in our post-election survey, 33% of our respondents reported making a political donation of some kind. While we do not have an accurate baseline to compare 2020 to 2016 in South Dakota alone, it is clear that citizens here were highly motivated since this was nearly triple the nation average from 2016 cycle. Trump voters were giving at a slightly higher rate than Biden voters, but both groups were deeply engaged on a financial basis. 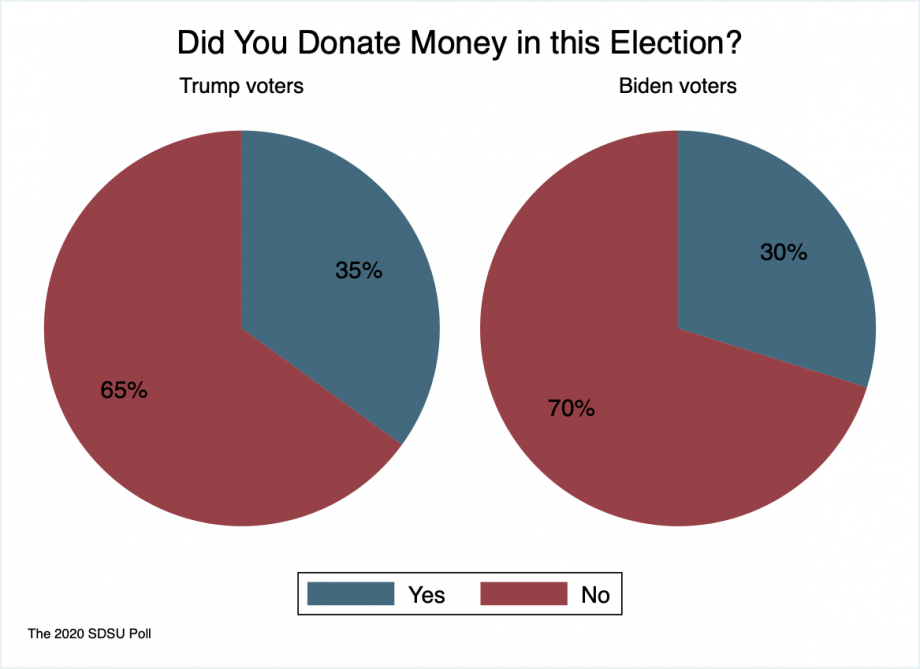 Presidential campaigns were the primary avenue by which voters were participating with their checkbooks. This is unsurprising since the top of the ticket is the focus of attention both of the media and voters themselves. Just as voters often “roll off” and only vote for the highest-level offices leaving much of the remaining ballot blank, the sense that the presidential race is of highest consequence will draw a greater proportion of contributors, particularly small donors. The survey also shows that several people were contributing to multiple recipients (which is why the bar graph results total to more than 100%). We take this as a sign that South Dakotans were deeply engaged in this election, deep enough that they were willing to “put their money where their beliefs are.” 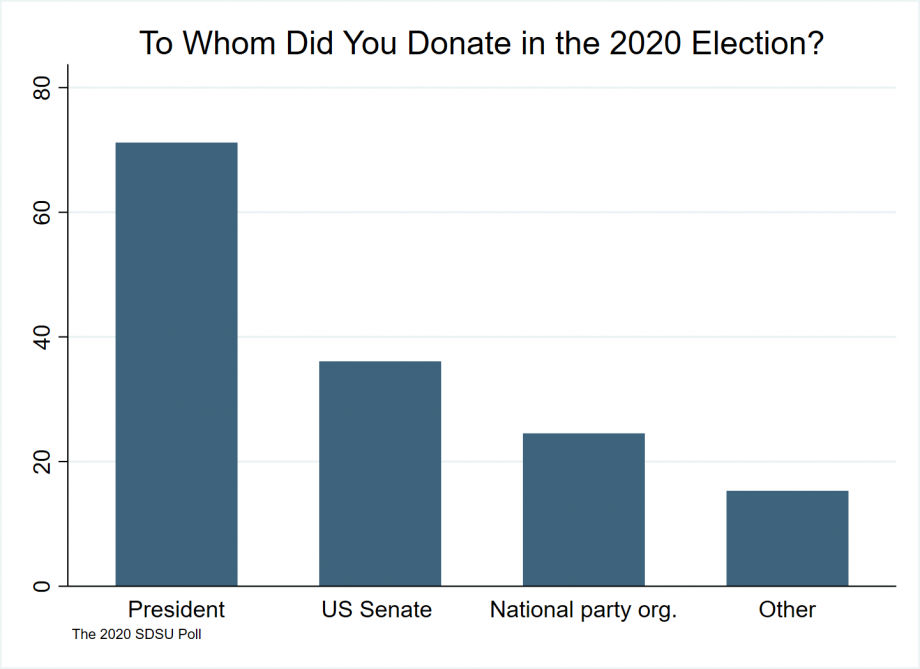 In South Dakota There Were Very Few “Shy Trump Voters”

Much has been made of “shy Trump voters” in various national media outlets. This is the idea that supporters of the president hide their true voting intentions to family, friends, and pollsters for fear of being judged. This would create what political scientists refer to as “social desirability bias” in accurately measuring people’s true preferences. In this case, it would presumably lead to polls under-measuring support for the president on a systematic basis. We asked respondents if they were honest with their family and friends when discussing their voting intentions. If there were a systematic “shyness” on the part of Trump supporters, we would expect to see a significant difference between Trump and Biden supporters on this measure. Rather than a difference, we see that the two groups are statistically indistinguishable from one another. While we are not aware of currently available data from similar questions fielded in other states, it would be interesting to compare our results with survey results elsewhere. Given the predominance of Republican partisan identification in the South Dakota electorate, “shy Trump voters” are arguably less likely to occur in this state compared to “swing states” or “blue states.” Yet if this phenomenon were real, we’d still observe some effect, even if at a lower degree. 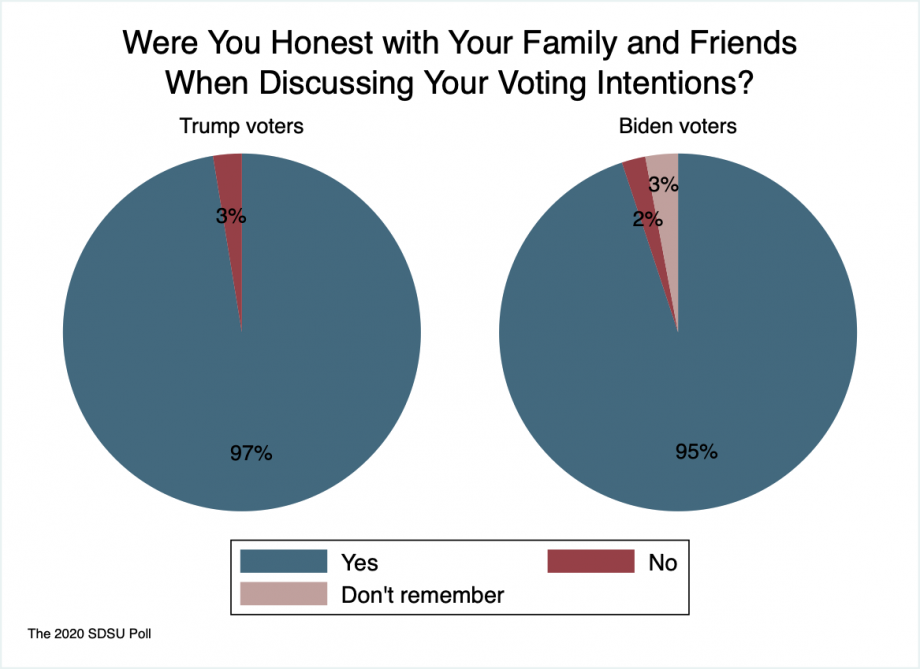