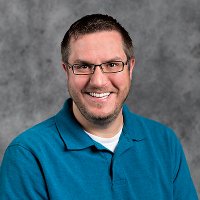 W. James Wood is an Associate Professor of Theatre at South Dakota State University, where he also serves as Supervisor of Business for the department. During the summers he acts and directs with Prairie Repertory Theatre while also serving as the Supervisor of Audience Services. Prior to coming to SDSU, Jim ran the Olde Towne Dinner Theatre, South Dakota’s only year-round dinner theatre, for almost 10 years. An actor, director, designer, manager and playwright, he prides himself on being considered a theatre generalist. He directed the premier production of his new play Chameleon Love in fall 2014. Specific areas of interest include stage combat, dialects and management. Jim is also the Region 5 Chair of the Kennedy Center American College Theater Festival. He has served Region 5 in multiple capacities over the years as a member of the Regional Advisory Board, member of the Selection Team, Theatre Management Coordinator, Stage Management Coordinator, production respondent, Assistant Coordinator for the Stage Crew Showdown and Directing Initiatives and workshop leader. His production of Escape From Happiness was an invited production to the Regional Festival in 2003.