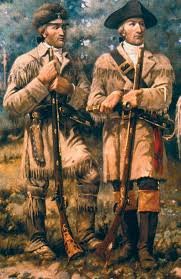 Once the United States had secured the Louisiana Purchase, President Thomas Jefferson wanted to explore the new land. He chose Meriwether Lewis and William Clark to lead the expedition. They came right through South Dakota and had multiple meetings with the Sioux tribes.

This book recalls the Lewis and Clark expedition, and their many meetings with the Sioux tribes.

This article is a great representation of the Native American’s side of the story.