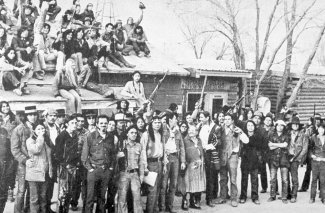 This movement began in the 1960s and formed after the African-American Civil Rights Movement. Native Americans used the phrase, “Red Power.” In South Dakota, Native Americans occupied Wounded Knee and Mount Rushmore and even swarmed the Bureau of Indian Affairs office in Washington, D.C..

An autobiography by Mary Crow Dog, where she recalled her time at the Rosebud Reservation and with the American Indian Movement.

Offers articles written at the time of this movement by an investigator and agent. Talk to Linda if you have any questions!