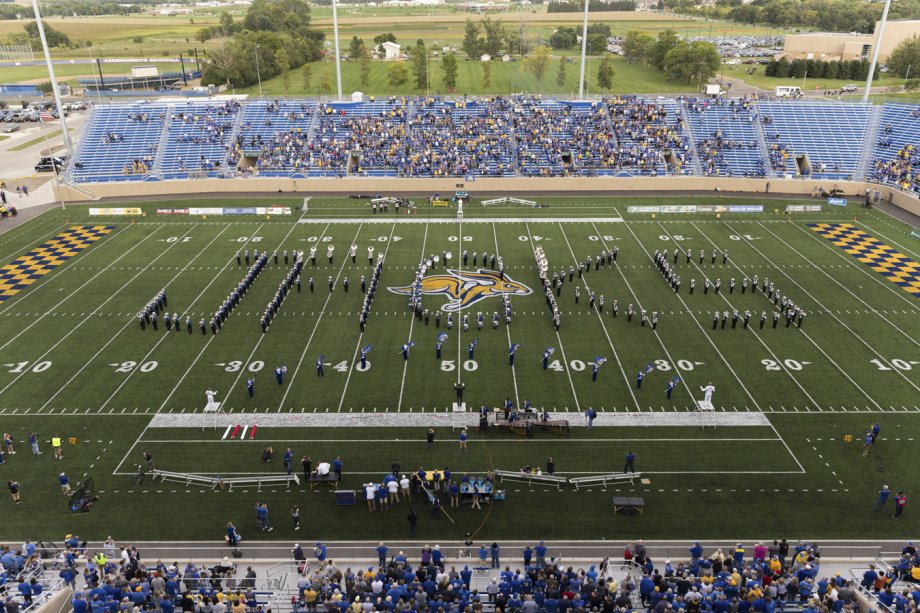 About the Pride of the Dakotas

"The Pride" is the most visible band at SDSU. In addition to performances during the pregame and halftime activities of all home Jackrabbit football games, the Pride has toured the Upper Midwest extensively, presenting shows at the Minnesota Vikings, Green Bay Packers and Winnipeg Blue Bombers football games and several guest performances at high school marching competitions in Minnesota, Iowa and South Dakota.

The Pride of the Dakotas is one of the largest "family" organizations on campus. Throughout the years, members of the Pride have forged friendships and memories that have lasted a lifetime.

The rich history of the Pride includes performances in Presidential Inaugural Parades in Washington, D.C. (1981 and 1997) and the 2000 National Independence Day Parade in Washington D.C. In addition, the Pride was featured in the PBS Production of “A Capitol Fourth,” and marched in the 2003 and 2008 Tournament of Roses Parades. In 2011, the Pride was featured in the Fresh From Florida Parade in Orlando. They present indoor concerts biennially.

The Pride is open to all SDSU students and credit for the course may be applied to the required University core of humanities. Although every student who wants to be part of the band may participate, auditions are required for specific assignments in the SDSU Drumline and drum major positions. Rehearsals begin on the first day of classes in the fall and are held Monday, Wednesday, Thursday and Friday throughout the marching season.

Six staff members manage The Pride of the Dakotas:

If you have any questions, check out our frequently asked questions, or, if you need to get in touch with us, contact us with the details below. See you in August!