In the community... In the world

Service learning gives students an opportunity to use their academic training to serve the community. It puts them in direct contact with the languages and cultures they study and helps them better understand the challenges and responsibilities of being world citizens. Faculty facilitate these encounters, providing students with the necessary training, mentorship and support.

Our Spanish program regularly offers a service learning course in which students learn about the history of and the contemporary issues surrounding Spanish-speaking immigrants in the United States, particularly in the Midwest. Outside the classroom, students spend the semester teaching English to adult Spanish-speakers in the Brooking area or helping Spanish-speaking students in local schools.

Every year (Spring or Summer semester) MLGS sends 4-7 student volunteers to Dilley, Texas to serve as translators and interpreters for women and children seeking asylum in the United States. If you are interested in volunteering or donating money to finance our volunteers, please contact Dr. Jose Alvarez or visit the Dilley Pro Bono Project for further information. 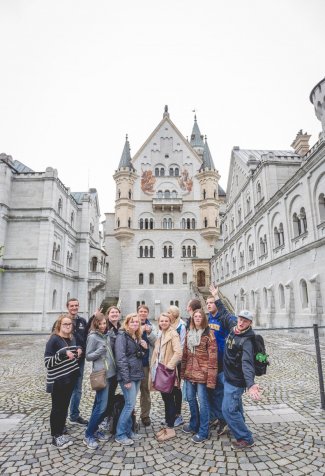 In 2016 and 2017, students spent 3 weeks in Germany living and working with refugees from 11 different nations. During this service-learning course, students provided humanitarian service, taught German, helped with every-day tasks, organized activities for teenagers and shared cultural experiences with each other. Students learned first-hand why people flee their countries and seek refuge in Germany and other European countries. They also attended workshops on war, immigration, food crises, Systems Theory and mental health.

In 2009-2010, students in Dr. Molly Enz's French 491 and French 492 (below right) courses worked on a service learning cookbook project with the Haiti Solar Oven Project. This year-long endeavor entailed transcribing and standardizing twelve new recipes written in Haitian Creole (for which Elizabeth Bergren and Amy Rieck won a service-learning award - below left) and then adding French translations to all of the recipes in the cookbook. The updated cookbook, enclosed with each solar oven given out in Haiti, presents 33 new and revised recipes written in English, French, and Creole. 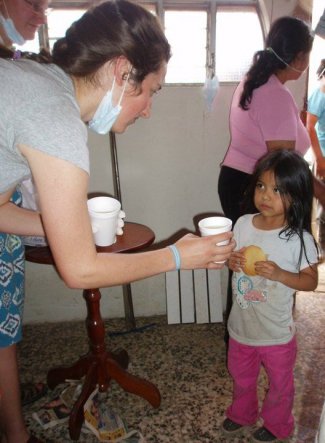 As quoted in the spring 2010 Service Learning newsletter, SDSU junior and students translator Vanessa Marcano portrayed the deeper values in such a project: "By translating these recipes, we are exposed to Haitian cultures and become motivated to learn more about this proud island that has shown, throughout history, that there is no nation too small to gain its dignity and independence."

Students have also traveled multiple times to Quetzaltenango, Guatemala for 5-6 weeks in the summer, where they have engaged in service-learning projects as part of their study abroad experience. In Guatemala, students have worked with schools, a medical clinic, a veterinary clinic, a women's cooperative, a reforestation project, and others. These activities give them a chance to use their language skills in a practical way as they get to know the Guatemalan people and culture. In summer 2010, students helped victims of a massive flooding that resulted from Tropical Storm Agatha.

A January-interim program to the U.S.-Mexican border in 2009 allowed students to see the reality of life along the border as they learned about immigration issues and worked at a camp for low-income children.

MLGS students volunteer in several capacities in South Dakota and beyond. Serving as teachers, translators, and interpreters, or working with underserved and underrepresented populations students apply their academic training, language skills and intercultural competence to give back to the community.