The State Agricultural College in Brookings opened its doors in 1884. Three years later, Pharmacy was offered as a branch of Chemistry under Professor Shepard. The first class of eleven students enrolled in 1888.

A Bachelor of Science degree in Pharmacy was offered as early as 1898, although for a number of years many students opted instead for the two-year Ph.G. (Pharmacy Graduate). World War I brought an interest in the cultivation of medicinal plants in the upper Midwest resulting in the establishment of the Pharmaceutical Garden, which was maintained by the College for almost 70 years. This legacy continues as a portion of McCrory Gardens.

During World War II, enrollments in Pharmacy decreased as students and faculty joined the armed forces. However, after the war, student numbers rose again significantly, leveled off during the Korean Conflict and then increased dramatically into the late 1950s.

When South Dakota State College attained university status in 1964, the Division of Pharmacy became the College of Pharmacy.

Transition to the Pharm.D. Program 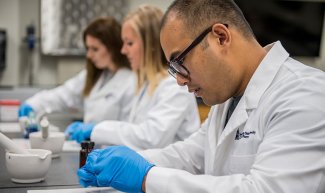 In 1960, an additional year was added to enhance professional training and to broaden cultural awareness, making pharmacy a five-year program. In the 1970s and 1980s, clinical and externship experiences were introduced, and students spent one semester of the fifth year off-campus receiving experiential education.

The freshman class of 1992 was the first to begin the pre-pharmacy curriculum for the new six-year Doctor of Pharmacy (Pharm.D.) degree. Two years later, 50 students were the first to be admitted into the professional program. They graduated in 1998. In the spring of 1993, South Dakota Board of Regents approval was finalized for the Post-B.S. Pharm.D. program, which admitted students in the fall semesters from 1993–1996.

A community pharmacy residency program was started in summer 2012 as a collaboration between the College of Pharmacy and Liebe Drug in Milbank. The program was designed to give graduates enhanced educational opportunities and expertise as a pharmacy practitioner in a community pharmacy setting. The residency site was recently moved to Lewis Drug in Sioux Falls.

Graduate Programs in the Pharmaceutical Sciences 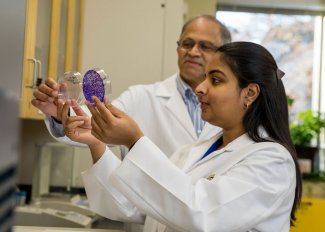 In the fall of 2000, the College became part of a consortium of departments at SDSU to offer the Masters and Ph.D. in Biological Sciences, granting the first Ph.D. in the College's history in May 2007. In that same year, the College received approval to offer its own Ph.D. in Pharmaceutical Sciences and in December 2007 graduated the first student with this degree. As of 2021, over 40 students have graduated from the program.

Study leading to a Master’s Degree in Pharmacy was offered from 1930 to 1972. A heavy teaching load and a lack of resources hampered the expansion of research activities, helping lead to the degree program being discontinued. As research in the pharmaceutical sciences department began to grow, the College was able to get approval from the South Dakota Board of Regents for a Master’s in Pharmaceutical Sciences in fall 1995, but the program was again placed on inactive status in 1997. However, the department was able to graduate five students during that time. In 2018, the department completed a self-study for the institutional review of the Ph.D. program. Based on the recommendations from the external reviewers, a new M.S. program in Pharmaceutical Sciences was developed and approved by the South Dakota Board of Regents in 2021. 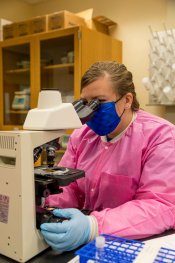 The medical laboratory science program has continued to expand since the transition to the College of Pharmacy. The program now offers an online Upward Mobility program, an accelerated bachelor's degree, and a phlebotomy certificate in addition to the traditional on campus program. 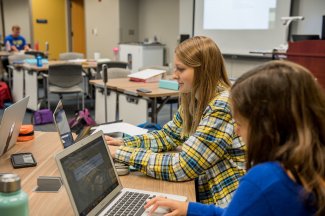 In 2014, the South Dakota Board of Regents approved an interdisciplinary Master of Public Health program. This is a joint online program offered through a collaboration between South Dakota State University and the University of South Dakota. The program rapidly grew in enrollment and added a graduate certificate in public health in 2020. The M.P.H. program gained accreditation from the Council on Education for Public Health in 2021.

In recognition of the expanded academic programs offered, the name of the college changed to the College of Pharmacy and Allied Health Professions in July 2016, and a new department (Allied and Population Health) was added in July 2019. 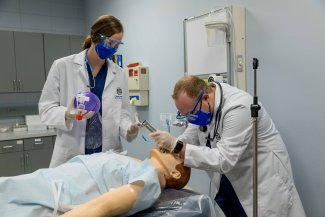 Throughout the College’s history, the quality and enthusiasm of our students have not changed. Our students have always been a strength for the College as evidenced by their outstanding achievements through their student organizations and individual efforts. The College has trained almost 4000 graduates, and it has earned its longstanding reputation of providing quality graduates in the health care professions. 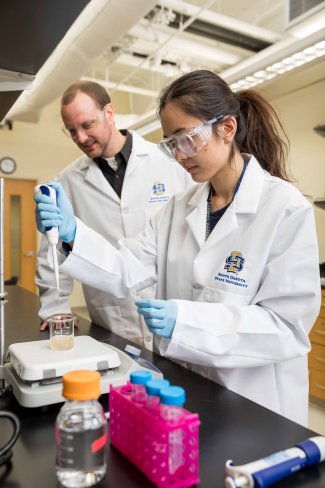 Pharmacy education started at SDSU in 1887, just six years after the Dakota Territorial Legislature authorized creation of the university. It would be another century before pharmaceutical research by the faculty was more than a rare exception. Research activity in the College began to expand in the late 1980s and into the 1990's when several strategic research hires were made. Federal, state, and private grant funding began to slowly increase, and the college's first U.S. patent was issued in 1994. Throughout this time, research was largely conducted by the faculty and undergraduate students. It was recognized that a graduate program was needed to move the research initiative forward. The Ph.D. in Pharmaceutical Sciences was approved in 2007, and significant research growth in the college followed.

Cancer research, which started in the mid-1980s, has evolved into a comprehensive research program covering all aspects of cancer drug development. More than 50% of the department faculty’s research is focused on cancer. In 2009, cancer research got a big boost through the governor’s 2010 funding program (2009-2015) when the department established a Translation Cancer Research Center in collaboration with Sanford Research. The center is one of the most successful research centers in the state with a 3:1 return on state investment in the form of federal grants, industry and private funding. The center’s activities were sustained through the establishment of two endowed faculty positions—the Markl Scholar in Cancer Research, held by Wenfeng An, and the Haarberg Chair in Cancer Research, held by Komal Raina. The Haarberg endowment was coupled with matching funds from the SDBOR to expand the department’s research space. The research instrumentation for cancer research has also been strengthened through state funding and institutional matching funds.

The next stage in pharmaceutical sciences research at SDSU started in 2021 with a $3.9 million award from the South Dakota Board of Regents to establish the 3D (Drug, Disease and Delivery) Research Center. This Center will advance research commercialization and develop new treatments through academic-industry-clinical partnerships.

Research in the Pharmacy Practice and Allied and Population Health Departments has experienced rapid growth. In 2018, the Hoch Family Endowed Professor for Community Pharmacy Practice was created to focus on the development of innovative community pharmacy practice models and advancing patient care in community pharmacies. The Community Practice Innovation Center (CPIC) was approved in 2020 and brings together faculty, students, researchers and practitioners to lead change within community practice through innovative community engagement and partnerships, research and education and training with a focus on access to care, population health and health outcomes.

When South Dakota State College attained university status in 1964, the Division of Pharmacy became the College of Pharmacy. In January 1981, the College moved into the Guilford C. Gross Pharmacy Building, its sixth physical home in its first century at SDSU. In June 2008, this one-story building was demolished to make space for the Avera Health and Science Center. The College of Pharmacy moved into its current home in the summer of 2010. The research wing of the building opened in spring 2011. In 2018, a major remodel of the pharmacy teaching labs was completed. This remodel included a simulated community pharmacy space, a hospital room with simulation technology, and dedicated compounding instructional space.