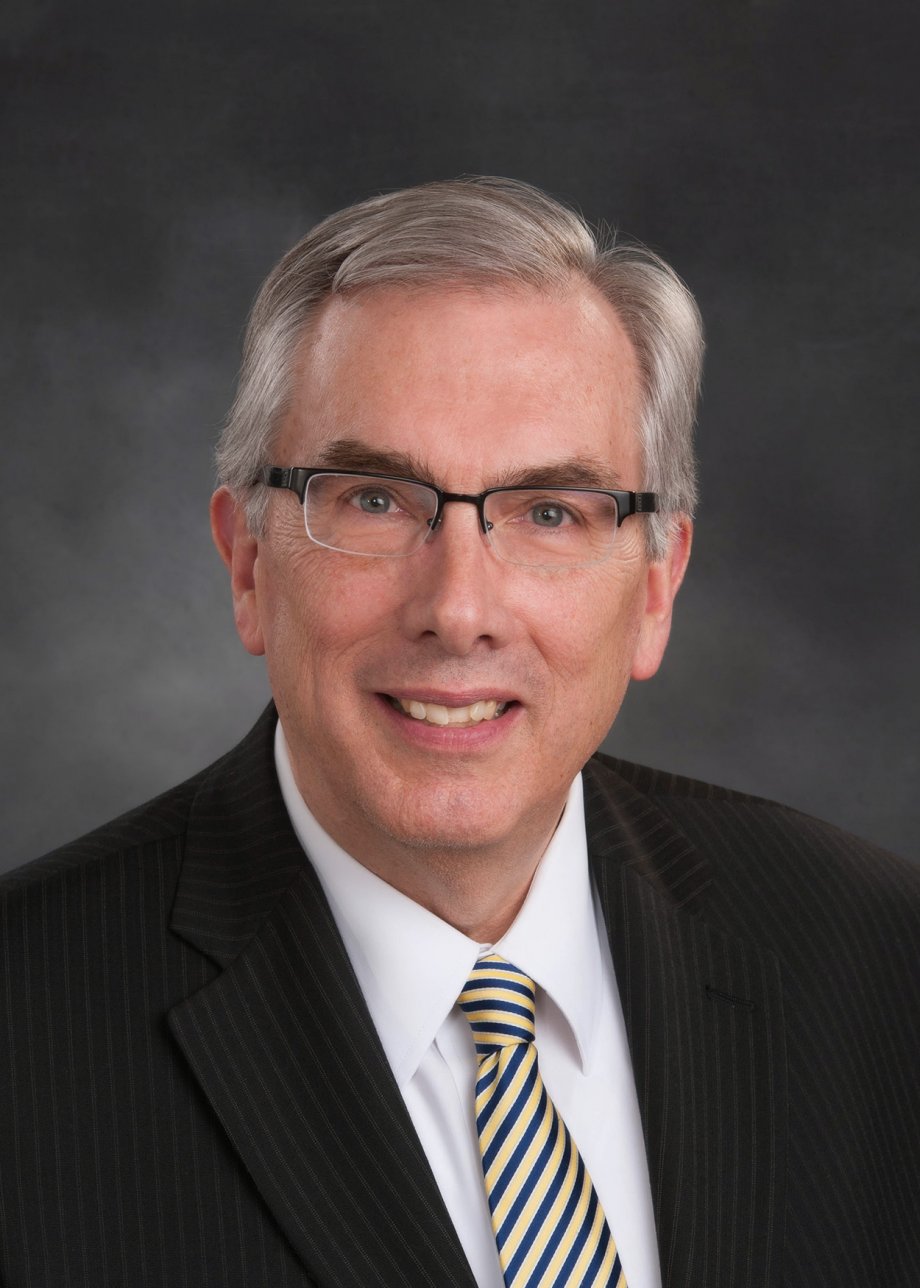 Barry H. Dunn was named the 20th president of South Dakota State University in April 2016, the fourth alumnus chosen to lead the institution. He assumed office May 23, 2016.

Dunn has been instrumental in a number of key initiatives during his time as president, including the implementation of Imagine 2023, the university’s current five-year strategic plan. The plan sets the strategic direction for the university and infuses a set of core values around people-centered leadership, creativity, integrity, diversity and excellence.

Promoting the plan and living its core values are critical to fulfilling the university’s vision of being a premier land-grant university. The core values also established the framework for SDSU’s operation during the COVID-19 pandemic and the ability of the university’s faculty and staff to continue its land-grant mission of providing the benefits of higher education to the citizens of South Dakota and beyond.

Planning for the fall 2020 semester during the pandemic was led by the JacksRBack Task Force, a group Dunn has led since May 1, 2020. The task force continued its work leading into the 2021-22 academic year, operating under a set of guiding principles that include a commitment to upholding the principles of public health and a safe campus environment focused on academics, employees, student life, research, scholarship and creative activities, athletics and the wider Brookings community.

Individual program accreditations clearly contributed to the strength of the university’s overall report. Under Dunn’s presidency, there has been continuous growth in accredited and certified programs reaching an all-time high of 49 accredited programs.

Dunn launched the Wokini Initiative early in his presidency. The program is aimed at creating greater access to higher education for Native Americans in South Dakota. The Wokini Initiative has increased programming and support to enrolled members of the state’s nine tribal nations, while enhancing research and outreach collaborations and programs with tribes, tribal colleges and tribal organizations in the state.

Funding for the Wokini Initiative has come through private donations to the SDSU Foundation and revenue generated by land as part of the South Dakota Permanent Trust Fund. Much of the land was claimed by the federal government in 1887 as part of the Dawes Act, assigning 160,000 acres to South Dakota to support its new land-grant college and agricultural experiment station.

Generous donors have supported key initiatives, including more than $8 million in endowments and a $4 million lead gift for the new American Indian Student Center that completed construction in May 2020. Altogether, more than $16 million has been raised for the Wokini Initiative under Dunn’s leadership, including grants from the Bush Foundation and the Margaret A. Cargill Philanthropy.

Working with congressional leadership in Washington, D.C., Dunn and SDSU leadership led efforts to include the New Beginnings for Tribal Students initiative in the 2018 U.S. Farm Bill to provide grants, on a matching basis, for land-grant institutions. President Donald Trump signed in January 2020 an Ag Appropriations Bill with a historic provision that provides full funding of $500,000 per year for three years to support American Indian students seeking the benefits of higher education at land-grant universities, which include tribal colleges across the nation.

A signature moment for Dunn came in November 2019 when he was selected to deliver the William H. Hatch Memorial Lecture during the annual meeting of the Association of Public Land-grant Universities. The lecture is one of three rotating lectures presented by the National Institute of Food and Agriculture and APLU, which honor three historic land-grant university figures: Justin Smith Morrill, William Henry Hatch and Seaman A. Knapp. The lecture commemorates the foresight of Hatch in leading the movement to establish national support for agricultural science at land-grant universities. Dunn’s lecture, “Wokini – A Morrill Obligation to Create a New Beginning,” focused on SDSU’s Wokini Initiative.

Success behind Imagine 2023 was seen early in its implementation. Several programs have been nationally recognized, including a top 20 ranking for SDSU nursing in terms of best value programs and a top 10 ranking for best college for education majors. A New York Times analysis showed SDSU ranks among the nation’s best for exceeding graduation rates nationally, surpassing many public land-grant universities.

An important milestone for Imagine 2023 and the commitment to being people-centered came when the university was ranked second in Forbes’ Best-in-South Dakota Employers for 2019. Forbes also ranked SDSU among its top 11% of colleges and universities in the United States.

In additional to the American Indian Student Center, four other major facility projects are the result of Dunn’s leadership. The South Dakota Legislature approved a $58 million project for the Animal Disease Research and Diagnostic Laboratory that included an addition to the current structure and a Biosafety Level-3 space, the only level-3 security facility in the state.

Dunn was also instrumental in gaining approval for the $55 million precision agriculture facility that opened in the summer of 2021. He led efforts to secure $22 million from the South Dakota Legislature and a lead naming-rights gift of $5 million from Raven Industries. SDSU is currently the only university with both a precision ag major and minor as part of its academic offerings.

Two additional major projects were completed under Dunn’s leadership. The Oscar Larson Performing Arts Center included a $49.8 million expansion, making it a premier. performing arts center in the region. The expansion included a new recital hall, proscenium theater, offices and practices areas. Harding Hall, home of the Ness School of Management and Economics, was renovated to include new classrooms, office spaces and support areas for $7.5 million, giving SDSU a home for its business economics and associated degrees.

In just over four years as president, the SDSU Foundation raised more than $290 million in private funding, which is used for scholarships, endowed faculty support, and building or enhancing academic buildings.

Dunn currently serves on the board of directors of Gov. Kristi Noem’s Second Century Habitat Fund and the South Dakota Symphony Orchestra. He was also appointed as a NCAA Division I Presidential Forum member.

Dunn’s time at SDSU dates to the mid-1970s when he received a bachelor’s degree in biology at SDSU and subsequently completed two graduate degrees in animal science—a master’s in 1977 and a Ph.D. in in 2000. He became the South Dakota Corn Utilization Council Endowed Dean of the College of Agriculture and Biological Sciences in 2010. He also served as director of SDSU Extension and as a professor of animal science.

As dean, Dunn led a college with approximately 550 faculty and staff, 2,800 graduate and undergraduate students, and a $78 million annual budget, including more than $20 million in grant and contract awards, fundraising and development. He shaped the academic and strategic direction of eight departments, spanning 18 degree programs, one regional research and outreach center, six research field stations and 14,500 acres of Agricultural Experiment Station research land.

As SDSU Extension director, Dunn administered and set the vision for five program areas across two colleges and nine departments, as well as eight regional Extension centers with a $12 million annual budget. He led a team of approximately 150 faculty and staff members and 3,500 adult volunteers.

Dunn spent six years at Texas A&M University-Kingsville (from 2004 to 2010) as executive director of the King Ranch Institute for Range Management. He worked in Brookings as an Extension livestock specialist and as an assistant professor in SDSU’s Department of Animal and Range Science from 1997 to 2004.

From 1979 to 1996, Dunn was a successful rancher, managing his family’s cattle ranch in Mission, South Dakota. In 2015, he was appointed to the South Dakota Habitat Conservation Fund by Gov. Dennis Daugaard, and to the Governor’s Pheasant Work Group in 2014. He served as an ex-officio member of the ag advisory board for the First Dakota National Bank in Yankton, South Dakota, from 2011 to 2016, and was a member of the board of directors for Padlock Ranch in Dayton, Wyoming, from 2009 to 2017.

Dunn has a rich academic background, was a successful rancher and farm operator and is a published author and researcher. He is a nationally recognized expert in beef production and ranching systems, and is a member of several professional organizations, including the Society for Range Management and the American Society of Animal Science. He has a deep historical and cultural knowledge of South Dakota and South Dakota State University, and strong, statewide relationships with industry influencers and stakeholders, including government officials, business leaders, university administration, faculty and staff.

Dunn and his wife, Jane, maintain her family’s original homestead north of Brookings where they raised their two sons. 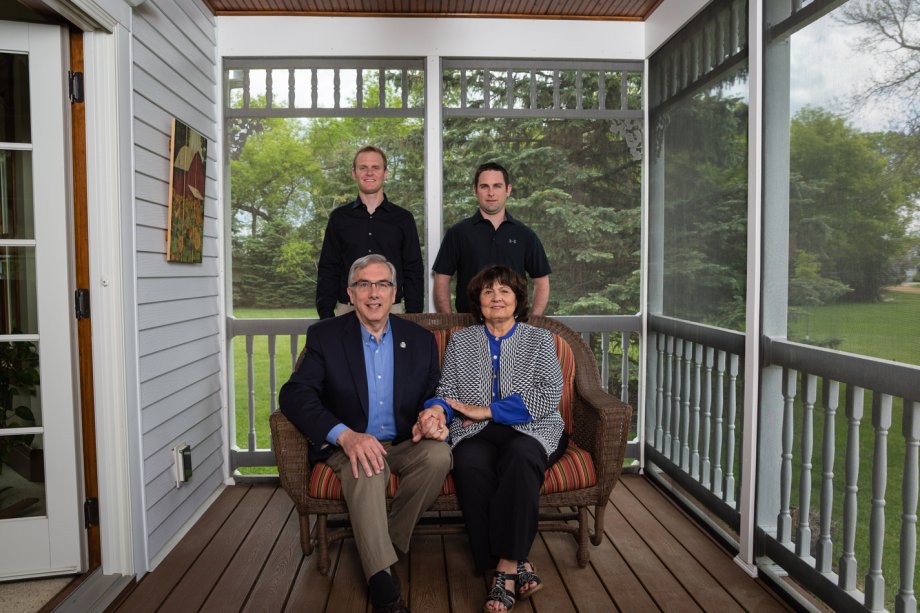 President Dunn in the News