Steven Wingate just might have the best view of campus. Situated at the top of Pugsley Center—overlooking South Dakota State University’s campus green and the Coughlin Campanile—Wingate’s office is full of books, magazines and manuscripts.

“A lot of people had to retire for me to get this office,” Wingate joked.

Wingate, a professor in the School of English and Interdisciplinary Studies, has been with SDSU since 2011, having previously spent time teaching creative writing at the College of the Holy Cross and the University of Colorado Boulder. A seasoned author, Wingate has published two novels, “Of Fathers and Fire” and “The Leave-Takers”—his latest book, which was published through the University of Nebraska Press’ Flyover Fiction Series in spring 2021.

A native of New Jersey, Wingate attended the University of Massachusetts Boston, earning an undergraduate degree in English. After completing a master’s degree in film and screenwriting from Florida State University, Wingate headed west to Los Angeles to pursue a career in screenwriting.

“The screenwriting thing was my first attempt to try and make a career,” Wingate said. “It did not go as well as I wanted because I am very, very much not an LA person.”

After two and a half years on the West Coast, Wingate moved to Colorado, and has been on the Great Plains ever since. At SDSU, he teaches courses in creative writing, literature and business writing.

Wingate was generous enough with his time to sit down for a question-and-answer session about his books, writing process, favorite authors and influences.

As an author who is experienced in publishing books, what does your writing process look like?

Wingate: I am an excruciatingly slow writer, and it’s something I really want to change about myself. I tend to have ideas sit around for decades, and I just let the characters grow in my mind before I eventually put them on the page. Then I put them away, and I move on, and then I circle back. It takes way too long.

For instance, “The Leave-Takers,” I think I started in 2003 or so. That was the first time I wrote it, and then it went through multiple iterations, and then finally it was time to really kind of get it out to the world. My first novel (“Of Fathers and Fire”), which came out in 2019, I believe I started it in 2001.

Both had a very long gestation—like how elephant babies spend a long time in the womb. I’m not thrilled about that, but my process is my process, and I guess in some ways, maybe it’s good because the book gets a lot of time to marinate. If you spend a lot of time on a book over many years, it develops multiple layers of emotional complexity because multiple versions of yourself have written that book. There are, as with a human, one layer built on another layer of character. I like that in books. I like to read books like that—books with a lot of texture.

As someone who writes fiction, how do you find your inspiration? How do you come up with the plot?

It always starts with a character in a setting. If I have a character, and I see this person imaginatively in a place, then I start asking myself questions about them. What are they doing there? How did they get there? Why can't they leave? Why won't they leave? What do they want? This is how things start. For me, it's always that image of the person or the place.

For instance, “The Leave-Takers” started—and this is a scene that's not anywhere in the book—with a mental picture of a man trying to push down an old building. It’s one of those 100-some-year-old buildings dotting the Great Plains that nobody has painted in decades and looks like it‘s ready to fall over. He's trying to push on the building to see how much force to give it before it falls down. That's the origin of the first the male character, Jacob, in “The Leave-Takers.”

Laynie, the female lead in that novel, came to me when I was in a doughnut shop in California, and I thought I saw a woman wearing a funeral veil. A bit later, I looked again and realized, “No, I simply must have seen some shadow or something because there’s nothing on her face.” But she stuck in my mind with that funeral veil, so I started asking myself, who was this person? Why the veil? What's she doing in this donut shop at this time? That's kind of how my ideas start—I find a character and I get fascinated by them. The more questions I ask, the more curious I get, and after a while, I realize I've got to write about this person.

When do you feel like a novel is complete? How do you know when to be done with a project?

For me, when I start moving words around for the sake of moving words around, I know that I'm pretty much done. Then it's time to stop messing around with it because it's possible to overwrite something. If you try to make it too perfect, then it feels really stiff. So when I start feeling like I am just kind of toying with it, and it's not necessary for me to do this these changes, that's my sign that this is ready for me to let go of.

What are some authors or books that you feel like you're influenced by, if any?

For me, it's very much on a book-to-book basis. I may love one book by an author, and other books, maybe I don't get as into.

There are a number of books that were super influential on me. For instance, Flannery O'Connor's “Wise Blood” was one of the most influential and interesting books that I've ever read. “The Stranger” by Albert Camus is another book. These books just get stuck in my head, and I kind of want to write a book like that someday. Jim Thompson's “The Killer Inside Me,” too. Thompson was a crime writer, and he tends to write about Texas, but he's originally from Nebraska. The new novel that I just submitted to University of Nebraska Press--“Moonville,” which I’m hoping gets accepted soon--is heavily influenced by him. But not everything I write has the same influences, so I don’t usually answer this question as well as people hope.

Do you have a favorite book or author?

Yes: Amos Tutuola.  He was very uneducated in a formal sense, and he worked for the British military in Nigeria during WWII. He was essentially an oral storyteller who picked up English and had a sixth-grade education. He wrote in a very broken style of English and his writing is heavily influenced by Yoruba myths. Despite having almost no education or training as a writer, Tutuola ended up being the grandfather of the English language novel in Africa, coming to international attention in the ’50s and ’60s. I love his work because his imagination is supremely free. He's not burdened down by the expectations of what a literate and educated person should be saying. I admire and strive for that freedom.

Do you listen to music while writing?

Most of the time, I listen to some kind of music while I’m writing, but I don't listen to music in English. Instead I listen to it in languages I don’t understand. I also listen to music from all over the world—the Congo, Japan, Mongolia. The rhythm, mood, and tone carry me along but I don’t have to worry about the meaning of the words interfering with my own.

I never really track the relationship between what I'm writing and the music that I'm listening to because I want the process to remain a mystery. I don't want it to be something that I've figured out about myself. I'm sure that I could build a spreadsheet and figure it all out, but where’s the fun in that? I just want to follow my instincts and not have to think too much about them.

How do you get in the writing “flow state?”

I tend to be a morning writer. When I was younger, I was very strict about it, and I had rather inflexible rituals. Then I became a dad and most of those rituals were systematically destroyed. I had to become more flexible. The best investment I've ever made was a pair of Bose noise-reducing headphones when my oldest son was born. Those allowed me to just kind of step away without leaving the house, and that's when I developed the habit of listening to the music. It just kind of allowed me to sink into that soundscape and sink into my own breath. I know that I'm writing well when I'm able to feel my own breath.

It was actually given to me by my seventh-grade music teacher. He said, “It's better to play 15 minutes a day than it is to play three hours on the weekend.” And if you look at the math, it's like, wait a minute, you definitely get more practice time if you pick the weekend.

But what happens if you pick up and play that 15 minutes a day is you are training yourself to go into the creative space. When you do that every day, you have a different relationship to your craft because you’re learning to cultivate that interest. Every single creative writing class I've ever taught, I've given that piece of advice.

I’d totally forgotten the name of my teacher until I was telling this story to my son, when he did band in seventh grade. Then I remembered the name of my teacher out of nowhere, so I ended up thanking him for that in “The Leave-Takers.” I hunted him down back in New Jersey, and I called him and it felt really good. Irving Weinberg—he was tickled that I remembered him from 40 years ago. 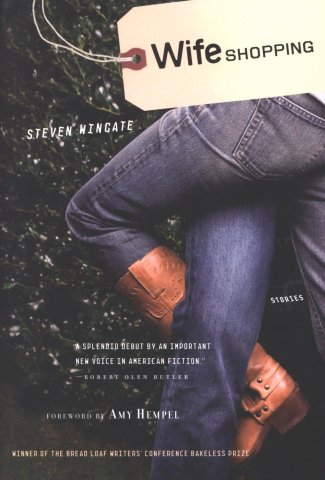 Wingate is also the author “Wifeshopping,” a short story collection, and the winner of the 2007 Bakeless Prize in Fiction from the Bread Loaf Writers’ Conference. Wingate’s books can be found at most online booksellers. This interview was edited for length and clarity.