Where is your phone right now?

Chances are, it’s within arm’s reach. As author Adam Alter explains, a device that travels with us is a good vehicle for addiction. Alter’s book, “Irresistible: The Rise of Addictive Technology and the Business of Keeping Us Hooked,” examines our rising addiction to technology and how those devices are specifically designed to be kept near us at all times. 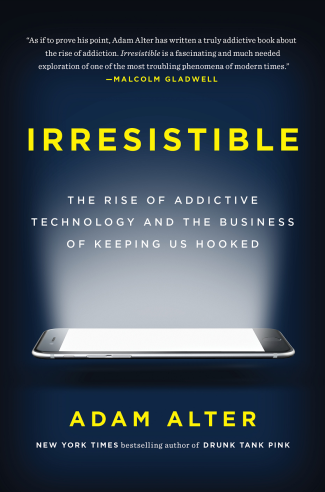 The book was chosen for South Dakota State University’s Campus and Community Common Read program in 2019 and was subsequently studied by two faculty researchers: Tyler Miller, an associate professor in the psychology program and the associate academic director of the School of Psychology, Sociology and Rural Studies, and Rebecca Bott-Knutson, professor and dean of the Van D. and Barbara B. Fishback Honors College. The results of their work were recently published in the Journal of Campus Activities Practice and Scholarship.

Common Read program
SDSU began the Common Read program in 2009 as an opportunity for students to share an intellectual experience with one another while also enhancing faculty and student engagement. Members of the community are also invited to participate in the program, which happens every year during the fall semester.

For the 2019 program, the Common Read committee looked to focus on a current topic related to the use of devices and technology. The selection of Alter’s book propelled Bott-Knutson and Miller to pursue a study, with the aim of “nudging the SDSU community into a more conscientious relationship with technology.”

“This book was really exciting to us, because he talked about the origins of addictions and behaviors,” Bott-Knutson said.

“The assessment was, does the Common Read program move the needle on changing people's behaviors?” Miller said.

The program, which took place during the fall semester, included a group read of “Irresistible,” as well as 12 associated “signature events” concluding with a lecture and forum with Alter himself.

More conscientious use of technology
Through a comprehensive study, the researchers found that people who participated in the program became more aware of their technology use. They also reported engaging in fewer social media platforms at the conclusion of the program.

The researchers recognized the good of technology use—D2L, publisher software, etc.—as this study focused on non-educational uses of technology.

“It was challenging, because we certainly recognize the good of technology use, but there's a part of it that isn't so good,” Miller said.

During the study, participants completed surveys regarding their technology use at two separate points, marked as “Time 1” and “Time 2.” The design of the study had both a control group and a “treatment group” (those who participated in the Common Read program).

“On the good side, we did register, and the surveys registered, that people were becoming more conscientious about their (technology) use,” Miller explained.  “So at Time 1, students were estimating their use in hours per day. At Time 2, they were more likely to check screen time apps.”

The researchers also used a questionnaire called the Test of Mobile Phone Dependence. It measured factors like tolerance, abstinence or “feelings of discomfort during abstinence,” and control.

“What we found sort of on the wrong side is that students did exhibit more tolerance-like behaviors—they use (technology) more and more to get the same effects,” Millers said.

Notably, participants from both the control group and the Common Read group felt their control over their use of technology declined from Time 1 to Time 2. This was corroborated through the Theory of Planned Behavior, a widely used model to predict people’s behaviors, and the Test of Mobile Phone Dependance. Previous research gives a possible explanation to this finding: People’s desire to use social media is difficult to resist even when it conflicts with other goals and is more likely to lead to self-control failures than other desires.

The primary area of assessment revolved around the Theory of Planned Behavior, Miller explained.

As Miller explained, the biggest takeaway from the assessment was the students became more conscientious of their technology use after participating.

Another important conclusion from the study is that campus wide initiatives and programs are worthwhile investments that have an impact and can create positive changes for those who participate in them, Bott-Knutson said.

“A goal of the Common Read committee is to bring awareness to important issues,” Bott-Knutson explained. “We think that this use of technology is important for us to be thinking about. We desired to raise awareness regarding how we utilize technology, how we maybe succumb at times to technology and also how technology has advanced the world around us because there's good and bad, right? Elevating awareness is beneficial because the more you become aware of something, the more you start building that into your consciousness.”