The 2022 South Dakota Election Study was conducted between September 28th and October 10th 2022 by The SDSU Poll, a non-partisan research group housed in the School of American and Global Studies at South Dakota State University. This poll is similar to election surveys conducted in May 2022 and October 2020. In this survey, 565 registered South Dakota voters answered questions about the upcoming November election. The margin of error of this survey was +/- 4 percent, on par with other state-wide polls.

In previous press releases, we looked at South Dakotan’s preferences in the gubernatorial race and attitudes on the issue of abortion. Today, we explore South Dakotans’ attitudes toward two measures that will appear on the November ballot.

Under the Affordable Care Act, states may expand Medicaid coverage to people making up to 138% of the federal poverty level. So far, 38 states have opted to expand coverage, 12 have not. Proponents cite the reductions in the rate of uninsured citizens after expansion and certain cost savings associated with the expansion. Opponents see it as federal overreach and fear that costs will climb dramatically as the expansion is implemented over time.

However, Medicaid expansion is politically popular. Many Republican-controlled state legislatures have adopted expansion by statute. Others like Idaho, Utah, Nebraska, and Oklahoma have expanded through popular initiatives, bypassing legislatures that have not expanded.

Our survey shows that a majority of South Dakotans, 53%, support the expansion. Approximately, 20% are opposed, and 27% of voters are undecided. The high number of undecided voters is not surprising. This is a highly technical issue where voters might not be comfortable in definitively stating a preference either in a poll or on the ballot itself. But, like every other state that has put Medicaid expansion to the people in an initiative, the measure here is rather popular and is likely to pass. 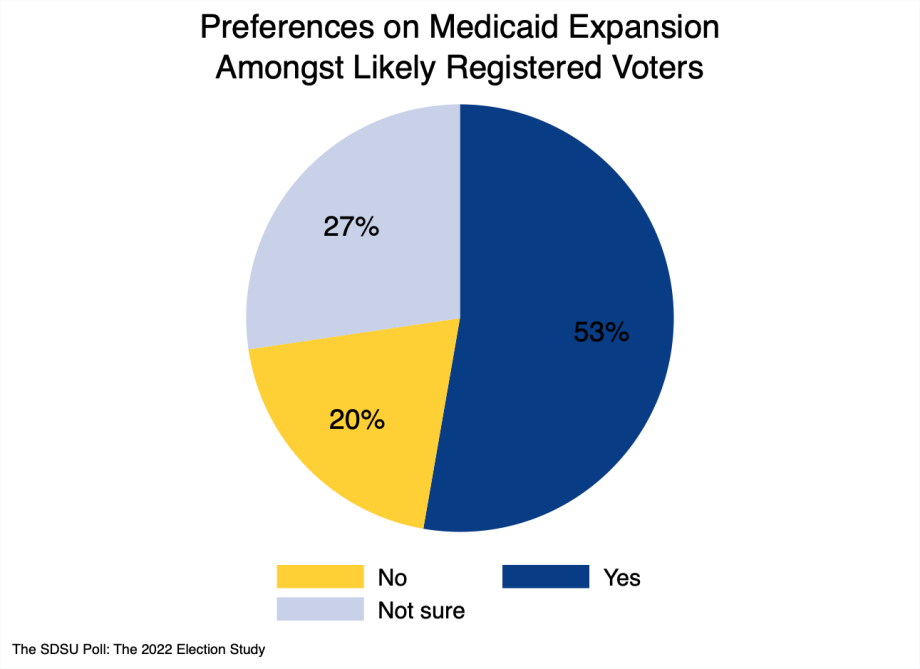 We also found that women are more supportive of Medicaid expansion than men. 59% of women are in favor of the measure compared to 49% men. A large number of voters, exactly 28% for both men and women are undecided. 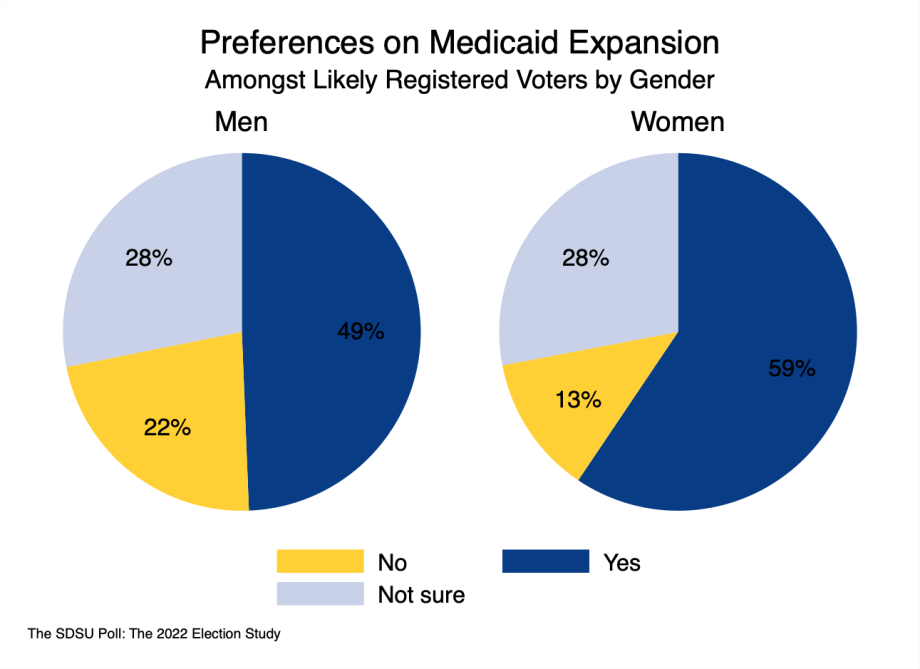 Our results are in line with findings of a nation-wide survey conducted in 2019 illustrates that women tend to favor a bigger government with more service, while men prefer smaller government with fewer services. That poll also found that the gender gap has grown over the past decade.

Looking at partisan differences, it is clear that South Dakota Democrats are overwhelmingly in favor of the measure, while Republicans are split. More specifically, 91% of Democrats are supportive of the measure, and only 5% are against it. On the other hand, 31% of Republicans are supportive, 28% are opposed, and 42% are undecided. Just as we reported on the issue of abortion, Democrats are united while we see differences between Republicans in the state. This mirrors what we’ve seen in other states. Independents (not graphed), supported the measure by 55% to 19%. Simply put, ideology and partisanship have their limits in driving people’s opinions on certain policies.

Though Republicans and conservatives are philosophically opposed to measures like this, medical costs are high and continue to grow throughout the country. This is especially salient in rural states like South Dakota where medical access is a real burden for many citizens across the state. When any policy is forwarded that might alleviate these costs in any way, people will be more open to policies that may run counter to their ideological orientation simply because they see an urgent need for relief.

We also compared rural and urban support on Amendment D and found no statistical difference between those populations in their levels of support, both being at 53%. 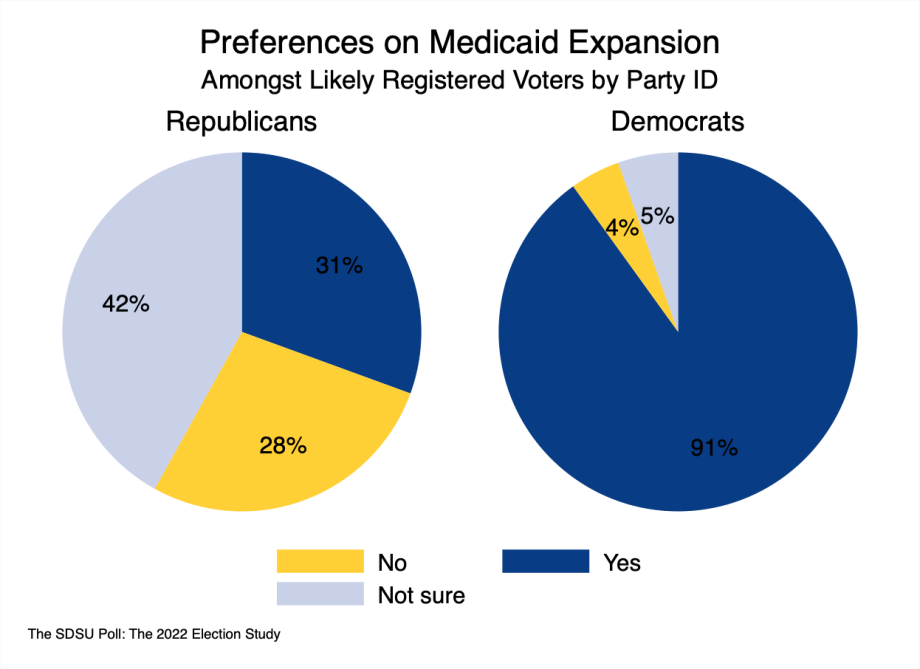 In the 2020 election, South Dakotans overwhelmingly voted for medicinal marijuana and endorsed recreational marijuana (Constitutional Amendment A) by a 54% to 46% margin. The following year, the state Supreme Court voided Amendment A on the grounds that it contained multiple subjects, violating the amendment process. Though some legislators considered codifying it through the legislative process, they ultimately balked since Republicans were split on the matter.

These events prompted legalization activists in the state to put the matter to the people again in the form of Initiated Measure 27.

The results of our poll show that South Dakotans are evenly divided on the issue of recreational marihuana legalization. 45% of South Dakotans are in favor, 47% are opposed, and 8% are undecided. This largely comports with the South Dakota News Watch and Chiesman Center poll results from July 2022, which used slightly different wording. Given the 4% margin of error of this survey, we expect a very close vote.

This shows that the electorate may have shifted on the issue since approving a similar measure in 2020 and is bucking the national trend. Nation-wide surveys show that over time Americans are becoming more supportive of legalizing marijuana. 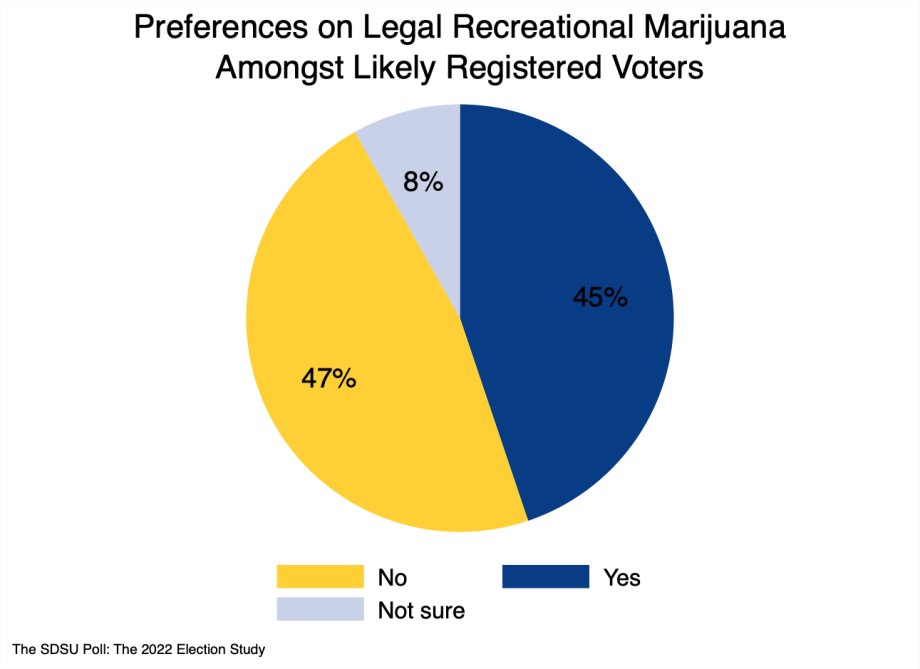 Our results show a large gap between Democrats and Republicans, with both parties showing similar degrees of division. While 71% of Democrats support the measure, 20% are opposed, and 9% are undecided. The situation is nearly reversed for Republicans; 68% oppose the measure, 24% support it, and 8% are undecided. Independents (not graphed) essentially split the difference with 51% supporting and 43% opposing. 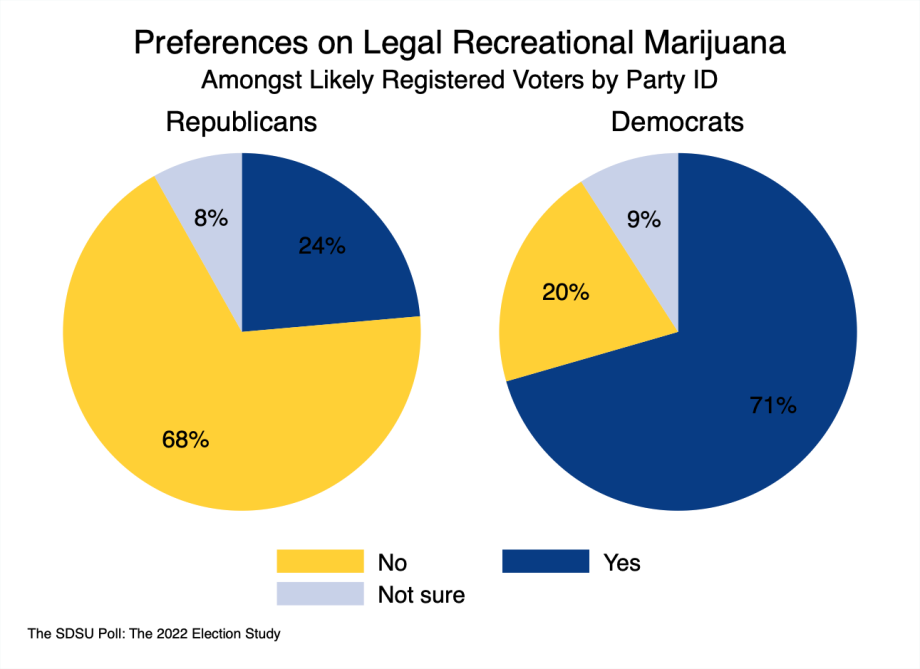 There is no statistically significant difference between men and women. About 47% of men support the measure, 45% are opposed, and 8% are undecided. Women are split; 44% are in favor, 47% are opposed, and 9% are not sure. The differences are within the 4% margin of error.

Our press releases will conclude on Friday, when we will look at long-term partisan trends in the state and the popularity of several politicians at the state and national levels.