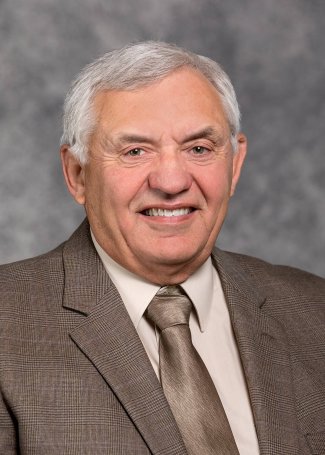 Whether it’s on his family’s Parker farm, serving on numerous leadership teams, civic groups and agriculture organizations or during his time as South Dakota Secretary of Agriculture, Walt Bones III enjoys working with others toward a shared vision.

“To get things done it takes a group working together toward a common goal,” explained the 2022 Eminent Leader in Agriculture, Family and Community. “I come back to the lyrics of a Toby Keith song, “if you don’t know where you’re going, you might end up somewhere else.’”

In fact, it was the opportunity to work together with his family to continue the farming legacy that began when his great grandfather homesteaded the land in 1879 that motivated Bones to return to his family’s Turner County farm full-time after college in 1974.

“There was never any pressure from my folks to come back to the farm, but I wanted the opportunity to work with my family to carry on something that my great grandfather started,” Bones explained.

“We are all looking to the future, and we are all looking at the common mission of the farm and enhancing opportunities for the next generation, knowing that our greatest strength was the variety of skill sets,” he said.

With the farm’s future in mind, the family worked to diversify their operation. To survive the Farm Crisis of the 80s, they transitioned the farm’s focus from raising registered Hereford cattle, to a commercial cow/calf herd and custom feeding operation.

“My dad embedded in us the KISS principle - keep it simple stupid. We got back to the basics of what we knew how to do and do well. At the same time, we were always looking for opportunities,” Bones explained.

“This project was an opportunity to get more out of every acre. Now we were able to market some of our corn as silage through the dairy,” Bones explained.

Conservation has also been top of mind for Bones and his family. Beginning with their great-grandfather’s original Tree Claim, the family continues to plant trees 143 years later. They also practice minimum tillage, implement water management projects for erosion control and rotational grazing purposes and plant wildlife food plots. Recognized in 2021 and 2022 for their conservation efforts, the family was nominated for the Leopold Award.

“We do these things because they are the right thing to do to enhance the stewardship of the amazing resources we have been entrusted with for the next generation,” Bones said.

When considering the next generation, for Bones stewardship extends beyond planting trees and grassland and soil health practices.

“Sustainability has come to mean many things – but to me, it is more than just saving carbon credits. It is about giving the next generation the same opportunities we had,” Bones said.

Advocating for agriculture is among the many ways Bones has worked to provide opportunities to the next generation. With the support of his wife, Jan, and children, Christi Wilking, Lisa Stark and Ryan, Bones made time to serve in leadership positions on countless boards for civic and agriculture organizations throughout South Dakota and the region. Because of the farm’s proximity to Sioux Falls media outlets, on numerous occasions he also served as a gracious host.

“I’ve had lots of farmer friends say they wouldn’t want to stand in front of a camera. But who better to tell our story, than us,” Bones asked. “A favorite saying of mine is: ‘if you’re not at the table, you are probably on the menu.’”

Serving as South Dakota Secretary of Agriculture from 2011-2013, Bones worked to unite individuals around the State. Shortly after accepting Gov. Daugaard’s appointment, he organized a Key Leader Round Table Discussion, to bring stakeholders together from across the state for a strategic planning session to prioritize ways to enhance agriculture.

“I don’t know everything. One business paradigm is to surround yourself with people more talented than yourself. At the end of the day, we did things to impact each of those priorities,” Bones said.

Reflecting on the future of his family’s farm, and agriculture across South Dakota, Bones is optimistic.

Recognized for his leadership and volunteer efforts, Bones was named a 2022 Eminent Leader in Agriculture, Family and Community by South Dakota State University Colleges of Agriculture, Food & Environmental Sciences and Education & Human Sciences. He will be recognized during an honoree banquet held at McCrory Gardens Education and Visitor’s Center on the campus of SDSU September 16, 2022. During the banquet, portraits of the award recipients are unveiled. These portraits will be displayed in a virtual gallery at sdstate.edu/eminent-leaders-honorees. Bones’ portrait joins more than 350 portraits of Eminent Leaders.