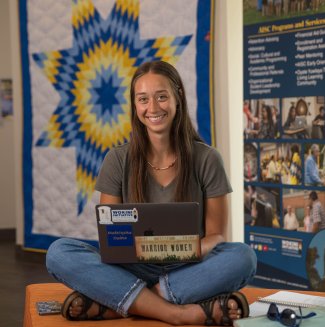 Last May, then South Dakota State University junior Jessica Begeman received some important news. She had just been named a 2022 Udall Scholar, marking the first time ever that an SDSU student had been named to the prestigious, highly competitive award.

“I got a call one day this spring from Dr. Rebecca Bott-Knutson (dean of the Van D. and Barbara B. Fishback Honors College),” Begeman said. “When we met, she had like this massive smile on her face and I thought I might have got it. My heart was racing, I was so excited. It was amazing.”

Begeman is originally from Martin, South Dakota, a small town located in the southwest corner of the state two hours south of Rapid City. She attended Bennett County High School, where she participated in student council, science club, band and sports.

As a member of the Oglala Sioux Tribe, she also spent a significant amount of time on the adjacent Pine Ridge Indian Reservation. There, Begeman witnessed some of the struggles of the people who live on the reservation, specifically the health obstacles that many Native Americans face.

“Indigenous people are predisposed to diabetes,” Begeman said. “The diet that we had back before colonialism was significantly different than the diet most people have now.”

For Native Americans, the rate of diabetes is twice as high as other Americans. Compounding the issue is the lack of access to fresh fruits and vegetables. Although there is a grocery store in Martin, the cost of food is not necessarily affordable for everyone. For groceries, Begeman and her family would make the two-hour, one-way trek to the nearest Walmart each month.

“It’s kind of difficult to get anywhere really because a lot of people don’t have gas to drive to get the fresh food,” Begeman explained.

Growing fresh food isn’t always an option either as the area is prone to drought and wells will often run dry.

“All of that kind of compounds together,” Begeman said. “Plus, even stress can raise your blood pressure, raise your blood sugar—that type of stuff. It makes all these comorbidities and conditions worse.”

After graduating from Bennett County in a class of 26, Begeman decided to attend SDSU as a Wokini Scholar. Initially, she didn’t know what she wanted to major in. While she was interested in engineering, she also had an interest in pharmacy—which was sparked from an incident during her high school basketball days.

“During one of our games, I got poked with someone’s fingernail, and it cut the outside of my eye,” Begeman said. “It was 10 at night and our eye doctor was all the way in Rapid. He said he would send down a prescription for eye drops but the pharmacy was closed. We ended up calling our pharmacist, who we knew personally, and he came and opened it up for us. I thought that was really cool of him.”

At SDSU, pharmacy classes have kept Begeman busy, but she also found time to get involved in clubs and events on campus. She is the secretary of the American Indian Science and Engineering Society chapter, a member of the Student Collaboration for the Advancement and Promotion of Pharmacy, and also a member of SDSU’s marching band, The Pride of the Dakotas, where she plays the trombone.

“She’s a very involved student,” said Selena Olvera, formerly the program coordinator for the American Indian Student Center on campus. “She was always there to volunteer, always willing to help out—always doing stuff that wasn’t asked of her. She helps tutor other students. She would help out any student at any time.”

Oh, and on top of everything else, she also finds time to participate in research for the College of Pharmacy and Allied Health Professionals.

“Most of what I’ve done is kind of like background, researching some stuff to potentially help with writing articles in the future, editing and proofreading other peers’ work and then cold calling patients to see if they’d be interested in filling out surveys,” Begeman said. 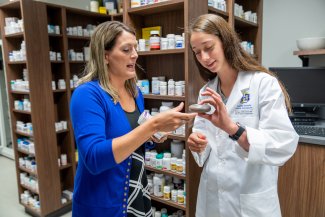 Her work with Dr. Sharrel Pinto, head of the Department of Allied and Population Health, has revolved around medication therapy management, which is when patients have meetings with pharmacists to discuss their medications. As Begeman explains, those meetings aren’t often covered by insurance so their research, which is funded through a five-year Centers for Disease Control and Prevention grant, focuses on the patient outcome of those meetings. The hope is that in the future, insurance companies could include those meetings in their coverage, alleviating some costs and providing better outcomes for the patients.

After Begeman’s sophomore year, she applied to pharmacy school and caught the attention of Dan Hansen ’03/Pharm.D. ’05, dean of the College of Pharmacy and Allied Health Professions, who teaches a first-year pharmacy school course.

“Jessica sits in the front row and has a great group of friends, colleagues and classmates,” Hansen said. “She’s engaged in class, she asks questions, she gives responses during active learning sessions—she’s definitely not one that sits in the back and just kind of tries to blend in. She’s in the front row, ready to be engaged and participate.”

After getting to know her during the fall and spring semesters, Hansen suggested that she should apply for the Udall Foundation Undergraduate Scholarship.

“Jessica is a rockstar,” Hansen said. “When I read about (the Udall Scholarship), she was the first person that I thought of.”

Begeman was hesitant to apply at first. The application, which required a significant amount of writing, was a bit intimidating. After thinking it over in the summer of 2021, she decided to throw her name in the ring and applied for the scholarship. Her application described her experiences on the Pine Ridge Indian Reservation and her interest in pursuing tribal health.

Of the 382 nominated applicants, Begeman was one of the 55 chosen for the undergraduate scholarship. As part of the scholarship, she traveled to Tucson, Arizona, for the annual Udall Scholar Orientation to meet other Udall Scholars and connect with the vast network of Udall alumni.

The Udall Undergraduate Scholarship honors the legacies of Morris and Stewart Udall, whose careers had a significant impact on Native American self-governance, health care and the stewardship of public lands and natural resources.

On Aug. 3, Begeman traveled to take part in the five-day Udall orientation, where she connected with other scholars and participated in a variety of workshops related to environmental policy and tribal health.

“They had a diversity and inclusion workshop for us to work through problems, looking at the roots of problems and all the different aspects of it,” Begeman said. “One of the pillars of the scholarship is consensus building, so they focused a lot on group work and having us work with different people from different backgrounds.”

The orientation also included activities, including a trip to the Sonoran Desert Museum and a drive through Saguaro National Park.

“It was a really amazing experience in all honesty,” Begeman said. “We have this big group chat with all of the scholars on it and everyone’s been texting each other since we left. It’s been really nice to meet so many people who care about the environment, tribal politics and tribal health care. All of these people care so much and they’re so willing to branch out to meet new people and work to try and find solutions for the problems that they want to solve.”

Begeman said the experience has inspired her to work toward solutions for her own community.

“The main thing for me was being exposed to a different environment,” Begeman said. “We got to meet with representatives from tribes in the area and that was really cool.” 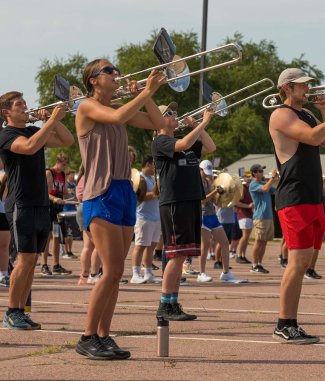 Begeman is currently preparing for her final year of undergrad and her second year of pharmacy school.

“I’m looking forward to it,” Begeman said. “I’ve heard that the second year of pharmacy school is just about the hardest one.”

The Pride will make the trek to New York City in late November to play in the Macy’s Thanksgiving Day Parade, which Begeman is looking forward to.

“I’m really excited for marching band because I missed out on it last year,” Begeman said. “I’m excited to spend time with all my friends in the Pride.”

Prior to her orientation this summer, Begeman spent time working at the Indian Health Services Center on the Pine Ridge Indian Reservation as a junior pharmacy technician. She got first-hand experience of the health care needs for people on the reservation.

“I worked on some projects that had to do with opiate use and the amount that’s been prescribed,” Begeman said. “Most of the time, I was helping technicians with their stuff to help them make the whole pharmacy move faster.”

Begeman will graduate with an undergraduate degree in pharmaceutical sciences this spring, but will have another two years of pharmacy school remaining. After pursuing a doctorate in pharmacy, she hopes to complete a residency with IHS.

“I want to provide those MTM (medication therapy management) services where we look at patients with diabetes and we talk about their diets, exercise and really get a full scope of what their lifestyle is like,” Begeman said. “I want to be able to do diabetes management type of stuff or anticoagulation care where you have one-on-one meetings with the patients and figure out what’s causing their health conditions to be the way that they are.”

She wants to one day return to the Pine Ridge Indian Reservation and help create better health care options for residents.

“I see people who are struggling, and I’ve had this opportunity to come to SDSU and get an education,” Begeman said. “I’ve had these opportunities, and it’s kind of necessary for me to go back and try and help others.

“To be so blessed in life to be able to go to college—a lot of people aren’t able to do that.”