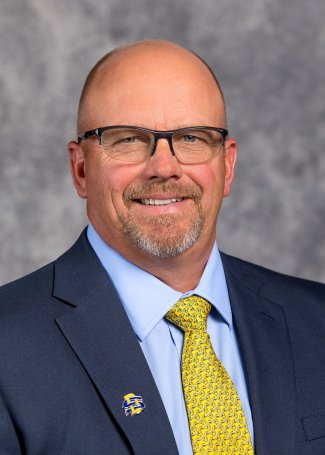 Bryan Jorgensen’s philosophy about the land upon which his family has built their lives and livelihoods for more than a century serves as a guide for the decisions he has made throughout his farming career.

“Our biggest legacy is the fact that we know this land is basically leased from our grandchildren. They have to be able to make a living on this soil, so it makes sense for us to take care of it and make it better for them,” said the 2022 Eminent Leader in Agriculture, Family and Community.

Sustaining the family farm for future generations matters to Jorgensen, because he and his wife, Brenda, value the opportunity they had to raise their family on the farm. The couple have three grown children, Nick, Kirsten McLaughlin and Reagan Nielsen, and nine grandchildren.

“I see no other way to raise a family,” Jorgensen said.

Located near Ideal, Jorgensen Land & Cattle is a diverse cow/calf and bull development operation that is the largest seedstock producer in the world. It includes a 12,000-acre no-till, diverse crop operation that produces feedstuffs, feed grains and certified seed. The family also operates an all-inclusive pheasant hunting lodge.

“We have learned to incorporate all these different things on an acre of soil to make our farm sustainable, not only for us, but for our children and grandchildren,” said Jorgensen, who operates the family farm in partnership with his son, Nick; brother, Greg; and nephew, Cody.

Serving as the farm’s chief agronomy officer, Jorgensen explained that focusing on soil health is key to all three integrated businesses. “Soil health management practices allow Mother Nature to take hold and do what she is really good at.”

Jorgensen became what he calls an “adamant no-tiller” not long after graduating from South Dakota State University in 1987.

“We quickly realized that having fewer trips across the field not only saved time and money, but we saw our soils become more conditioned to take in rain and retain moisture,” he said.

By 1991, the farm was 100-percent no-till. “That was the year our oldest son was born. There were times when we talked about tillage and he would ask, “dad, what is that?” All Nick has ever known is no-till,’” Jorgensen said.

“The cattle give me an enormous opportunity to grow crops that are traditionally not marketed,” he said.

“Mother Nature never has one single thing or one single species growing in the soil,” Jorgensen said. “When you increase biological activity, you improve the quality of the soil.”

In 2015, Jorgensen Land & Cattle was recognized for their soil health and overall conservation efforts with the Leopold Award. Throughout his farming career, Jorgensen has given generously of his time to strengthen agriculture throughout South Dakota. In 2015, he became a founding member of the South Dakota Soil Health Coalition. Over the years his family has hosted many farm tours and Jorgensen has served in leadership roles for several other agriculture organizations including the South Dakota Crop Improvement Association. While serving as president, he was instrumental in saving SDSU’s oat breeding program.

Jorgensen credits the farm’s management structure and employee team with his ability to spend time away. He explained that each week, the farm partners hold a meeting with the employee team to go through farm work and projects.

“My dad called it integrated resource management – pulling the right people together to accomplish a job,” Jorgensen explained.

Jorgensen was named a 2022 Eminent Leader in Agriculture, Family and Community by South Dakota State University Colleges of Agriculture, Food & Environmental Sciences and Education & Human Sciences. He will be recognized during an honoree banquet held at McCrory Gardens Education and Visitor’s Center on the campus of SDSU September 16, 2022. During the banquet, portraits of the award recipients are unveiled. These portraits will be displayed in a virtual gallery at www.sdstate.edu/eminent-leaders-honorees.

“Legacy has always motivated me. Grandpa started the farm. Dad built the farm. I didn’t want to be the one to drive it down the tubes,” Jorgensen said. As he reflects on the next generation he now partners with - his son and nephew - he said he is confident the farm’s legacy is in good hands.