There have been several factors that have kept Luann Miner motivated to pursue her bachelor’s degree in human development and family studies.

“I would have to say it started as a Wokini Scholar,” said Miner. “It allowed me to be comfortable with who I am and then allowed me to be more social, you know, not so shy. I try to keep that in the back of my mind to step out of my comfort zone to interact with others.”

Stepping out of that comfort zone is what got her to play rugby. 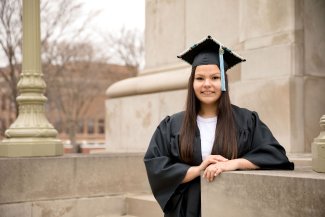 While walking through the University Student Union with her roommate and another friend, someone told Miner she’d be a great fit for the club. She’s been more than just a good fit as she was chosen for an all-star game in Houston, not bad for someone who knew nothing about the sport.

She is a hook, which places her in the middle of the scrum. That forward position has been called the hardest position in the sport as it takes strength, courage and power but also a cool head.

That accurately describes Miner, who spent 16 years in foster care before being adopted by Saisha Sandoz in Redfield. Miner was a freshman at State at the time.

“I was definitely impacted by my last-ever foster mom, who legally adopted me and took me out of 16 years of foster care. Until then, I never knew where I was supposed to be going,” Miner said. “She kept pushing me forward. Before that, I’d be placed with a family for a month or two and then back in the foster care system. It’s hard to know what stability was when you’re constantly moving and people keep telling you to trust the process.”

Trust in others has come from being a Wokini Scholar and by rooming all four years with Kelsey Anderson, a friend of hers from Redfield.

“I chose SDSU as a safe outlet to stay around friends. I didn’t know what college was about because I’m the first one of my family to go to college,” Miner said. “Being a Wokini Scholar has provided four years of being around a majority of the same people and being able to go to an open office or open arms after any conflict or bad day. It’s been very encouraging.

“It’s also brought me back to my own culture and traditions,” she continued. “Being in foster care, I didn’t have the opportunities to learn about my culture, traditions or the history of ancestors. Being a Wokini Scholar has helped shape who I am and what I want to do.”

And after interning as a residential counselor with New Beginnings Center in Aberdeen, she would like to work in child protective services before earning a master’s and possibly a doctorate and working as an investigative social worker.

Those career plans have not come easy for the president of the American Indian Student Association.

“I have not wanted to come back to college since first semester my freshman year and then every semester after. I’ve kept coming back, basically from my parents pushing me and not letting me give up,” Miner said. “Part of the inspiration of wanting to continue is being part of the first cohort of the Wokini Scholars to graduate and be able to show no matter how hard it is, push through and finish with a bachelor’s degree.

“I think having the consistent support and encouragement behind me from faculty, advisers and peers just reminded me that going to college as a foster care child is possible, and I want to be able to help others see that light, too, particularly if they are going through a rough patch in life,” she continued.

Another way Miner has shown others how to succeed is participating in the U.S.A. Ambassador Pageant. A two-time selection, she will compete for a title in late July.

Not a bad way to end her undergraduate days, particularly for someone who was worried about making a fool of herself by even applying to be a Wokini Scholar.

“The main message that I want anyone, but particularly any child of any age, to know is that their life doesn’t stop because they’re in foster care. Foster care doesn’t define who they are,” she said. “There’s a lot of stereotypes and stuff about foster children but they can still go on to be better and have a better life for themselves, even if they don’t have that support of immediate family behind them. There’s always going to be some support system that you’ll find out there in the world.

“I’d then tell them I didn’t know who I was when I came to college. I was just trying to fit in with everything and everybody, which is next to impossible,” Miner continued. “Being a Wokini Scholar helped a lot. I’d say it all started from orientation in 2018. It’s made me more comfortable as a person and where I come from.”