Samitinjaya Dhakal, a South Dakota State University graduate student, found that out firsthand, through his research study “Effects of Lean Pork on Microbiota and Microbial-Metabolite Trimethylamine-N-Oxide: A Randomized Controlled Non-Inferiority Feeding Trial Based on Dietary Guidelines for Americans.”

Dhakal’s study was recently honored by the American Society for Nutrition with the Graduate Student Research Award—one of the highest possible honors for nutrition science graduate students. Dhakal competed against 216 national and international graduate students including researchers from Cornell University, the University of Michigan and Purdue University, among others. Dhakal’s research was also recognized through ASN’s 2022 Emerging Leaders in Nutrition Science program designed for bright, upcoming doctoral and postdoctoral researchers.

Founded in 1928, ASN is the preeminent professional organization for nutrition research scientists and clinicians around the world. Students were evaluated on research concept, experimental design, data analysis, quality of conclusions drawn and communication skills by a panel of experts that included Paul Coates, then president of the ASN and former director of the Office of Dietary Supplements at the National Institutes of Health, and Martha Belury, current president of the ASN.

Dhakal earned his undergraduate degree in pharmaceutical sciences at Tribhuvan University in Nepal, his native country. In pursuit of a master’s degree, Dhakal began researching various U.S. universities to figure out where he wanted to go.

“I was exploring the faculty pages on the university websites for the kind of research I was interested in,” Dhakal said. “I found my (current) adviser’s (Moul Dey) project to be very interesting, aligning with my career goals and I really wanted to be a part of that.”

After getting his visa, Dhakal was admitted to SDSU and made the nearly 40-hour journey to Brookings in fall of 2017. He began working with Dey, a professor in the School of Health and Consumer Sciences, which is in SDSU’s College of Education and Human Sciences.

“Pharmaceutical sciences is an important health science discipline that is designed to be treatment focused rather than prevention,” he said.

“Most of the modern medicines alleviate symptoms; very few medicines are made to cure diseases,” Dhakal continued. “When I explored more, after my undergrad, I found nutrition science to be an important field within the health science umbrella, where the focus is more on disease prevention. The field with such promise, yet has many ambiguities creating exciting prospects for future research.”

In nutritional sciences, there are a lot of unsubstantiated concepts.

Dey said the challenge in nutritional concepts is that they are difficult to validate to the point where they are absolutely right or absolutely wrong about a food. Layers of evidence must accumulate from different research approaches. Some foods work for some people and not for others.

Evidence shows that things like ultra-processed foods, including processed red meat, are not health promoting. But what about fresh, lean, red meat? The notion has long been that red meat can lead to an increased risk for heart disease due to its higher saturated fat content. But red meat is also a good source of protein and micronutrients. So, was fresh, minimally processed, lean, red meat worse than poultry for omnivorous populations?

“That was the question we asked in this study, using a specific context,” Dey said.

In the United States, over 95% of the population practice animal protein-based lifestyles. Americans overwhelmingly eat meat—red meat especially. Moving away from that protein, regardless of its perceived dangers, isn’t likely to happen for most people. Further—as Dey explained—labeling something as harmful without sound evidence could potentially drive people to more harmful foods.

Searching for the truth behind red meat

Dey and Dhakal’s research project began in 2018 through funding from the National Pork Board and the National Institute of Food and Agriculture. Funding agencies had no role in the concept, design or outcome of the study.

“Dr. Dey was the main architect of the project,” Dhakal said. “She explained to me the scientific premise, rationale and approach for the project and we took it from there."

Dey’s overall research focus is to understand the impact of dietary components on physiological endpoints and biomarkers indicative of chronic disease risks and how such outcomes are linked to underlying nutriomics factors (gut microbiota, gene expression and epigenomics, metabolomics).

Research from the Cleveland Clinic and other laboratories have suggested elevated circulating levels of TMAO led to an increased risk for heart disease. Heart disease remains the number one leading cause of death and disability in America, according to the Centers for Disease Control and Prevention.

According to Dey, the belief is that TMAO levels rise due to consuming red meat because of its precursors. However, any animal-sourced protein has TMAO precursors, Dey said.

“A study from Cornell University reported individuals’ blood TMAO levels spiked the highest after consuming fish—much higher than that after consuming beef,” Dey said. “However, we are told fish is healthy, but red meat has always had a negative connotation—especially considering its association with TMAO. You can see the ambiguity.”

The gold standard of studies

The study’s hypothesis was “pork minimally impacts the gut microbiota and microbiota-dependent TMAO response in omnivores,” as outlined in their recently published research article in the Molecular Nutrition and Food Research journal, sharing co-authorship with Zahra Moazzami and Cydne Perry.

After screening almost a hundred people for eligibility, the research team recruited 38 Brookings area participants—50 years and older and at higher risk for atherosclerosis—to take part in a randomized, controlled, crossover feeding trial.

Participants consumed their daily meals, snacks and drinks provided by the research team. Meals were prepared from scratch by dietetics and hospitality management students following the 2015–2020 Dietary Guidelines for Americans which is available at http://health.gov/dietaryguidelines/2015/guidelines/.

“Despite being around for over 40 years, our study is among a handful of research that have tested the U.S. Guidelines diet in a registered controlled feeding clinical trial,” Dhakal said.

The researchers chose pork tenderloin—a red meat and the most popular animal protein worldwide—and chicken breast as the two primary proteins for the meals. After roasting and defatting, both have comparable calories and macronutrients, Dhakal noted. All other food was precisely portioned and matched for each participants to ensure consistency.

“Since poultry is widely recommended as heart healthier among animal proteins, chicken served as an active control for pork,” per the study.

The researchers collected blood, buccal swabs, urine and stool samples four times during the trial to assess targeted and untargeted metabolites as well as metagenomic changes before and after the consumption of pork or chicken.

“It was a lot of work, but doing it this way helps minimize confounding effects, thus producing highest levels of evidence feasible in human nutrition research,” Dey said. “We are indebted to our study participants who complied well with our strict protocols; many of them joined the study because they wanted to help academic research.”

Tightly controlled interventions with physiological and molecular endpoints, like this one, represent the “gold standard” for clinical nutritional research. 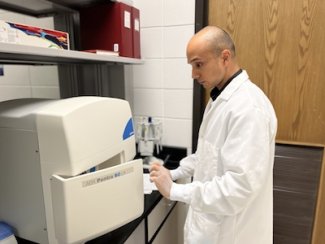 Pork not inferior to chicken

The feeding portion of this study took place in 2018-2019. Nutriomics assays and data analysis took another two years to complete.

At SDSU, Dhakal took courses in biostatistics, R programming and bioinformatics, which prepared him to analyze the massive data set of more than 350 biochemical changes in blood and more than 2,000 taxa of gut bacteria in hundreds of collected samples and replicates.

“Samitinjaya far exceeded my expectations on how he was able to apply nutritional data science skills in the context of this study,” Dey said.

The data showed that substituting pork for chicken did not elicit a stronger TMAO response.

“What we found is that pork is statistically not inferior to chicken for TMAO,” Dhakal said. “Its impact on TMAO precursor compounds, markers of lipid metabolism, oxidative stress and blood pressure were also not different.”

“Instead of trying to say this is better and this is worse, we’re trying to say that they’re not really different using a non-inferiority trial design,” Dey said. “That is another very new approach to look at dietary impacts on health; the concept however existed in pharmaceutical world for a long time to compare generics with brand name products.”

As Dey and Dhakal noted in the study, a clear understanding of TMAO interaction is necessary in the context of popular dietary protein sources—something that had not widely been tested in a controlled feeding setting using the dietary guidelines.

More data from the trial remains to be analyzed and published, Dhakal said.

Future avenues from this research could compare plant-based proteins with animal proteins.

“We have new federal grants lined up to do just that,” Dey said.

Over the course of this research study, Dhakal graduated with his master’s degree and began pursuing his doctorate. He will defend his dissertation later this year after completing another project.

After graduating, Dhakal hopes to stay in academia.

“The plan is to pursue academic research and teaching,” Dhakal said. “There are so many exciting and important avenues that remain unexplored, especially to understand how nutritional metabolomics can help promote long-term health and cognitive functions. I feel fortunate about simultaneously training in clinical research, nutriomics and data science at South Dakota State University that led to these national recognitions—made possible by the scope of this project as well as due to Dr. Dey’s mentoring and support from the school.  I want to make use of this unique skill sets to contribute to the discipline.”

“Given all the technological and artificial intelligence advances going on, I believe there is no better time to be an academic,” Dhakal continued. “Imagine a world where any 90-year-old could engage in any activity they enjoy without being restricted by their health.”