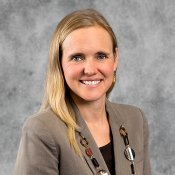 Sarah Mollman has been named the associate dean for research for South Dakota State University’s College of Nursing. She will be based at the college’s Rapid City site.

“That’s kind of what planted the seed in research,” Mollman said.

After graduating with her master’s degree in 2011, Mollman pursued her Ph.D. in nursing at the University of Nevada-Las Vegas. She also began working at SDSU as an instructor.

After graduating from UNLV in 2018, Mollman was an assistant professor until being named the associate dean for research in May.

Mollman received the college’s Faculty Award for Excellence in 2018 and the college’s Researcher of the Year Award in 2021. Her primary areas of research include palliative care and intentional learning in higher education.

“I really got fortunate when asked to do some focus groups across the state related to palliative care,” Mollman said. “My background for nursing is inpatient oncology care.”

Mollman said when someone cares for cancer patients, they also do a lot of palliative quality of life measures—something that she was very comfortable with doing. The focus groups turned into a statewide network for palliative care, which Mollman led during a funding gap year.

“We are really fortunate and currently have a Rural Health Network Development grant,” Mollman said. “Fifty percent of my time is working on the network as co-project director as we educate people throughout the state on palliative care.”

Now as the college’s associate dean for research, Mollman will continue to move forward with her research on palliative care. She will also help faculty members build up their research activities.

One of Mollman’s goals as the associate dean for research is to continue to support the college’s growth at the Rapid City site.

“Health care facilities out here are coming together, and a lot of organizations are coming together to grow,” Mollman said. “I think in my role as ADR, I need to think about research opportunities for students as well by creating those key partnerships and collaborations.”

Another goal of hers is to help facilitate the continued growth of the research enterprise.

“Really, it’s just to grow the research and scholarship that’s being done by the nursing faculty,” Mollman said. “And make sure that it benefits society and we are making a difference to the person who is living here or in this region.”

Further, Mollman wants to make sure that the research being done gets to the patient.

“We need to make sure we are translating it, getting it to them and not just doing studies,” Mollman said. “I think the College of Nursing is in a really good position in that we have Ph.D. faculty and we have DNP faculty.”

Outside of her work, Mollman enjoys spending time outdoors with her two rescue dogs, Zeus and Rambo.