“Feelings Thermometers” are a common and intuitive measure used by political scientists to measure support of individual political leaders. A score of 0 indicates the coldest feelings towards the subject, 100 the warmest feelings, with 50 representing neutrality. This allows us to get more sensitive measures of support than approval ratings widely used in other polls, and gives us better differentiation between politicians - particularly of the same party. 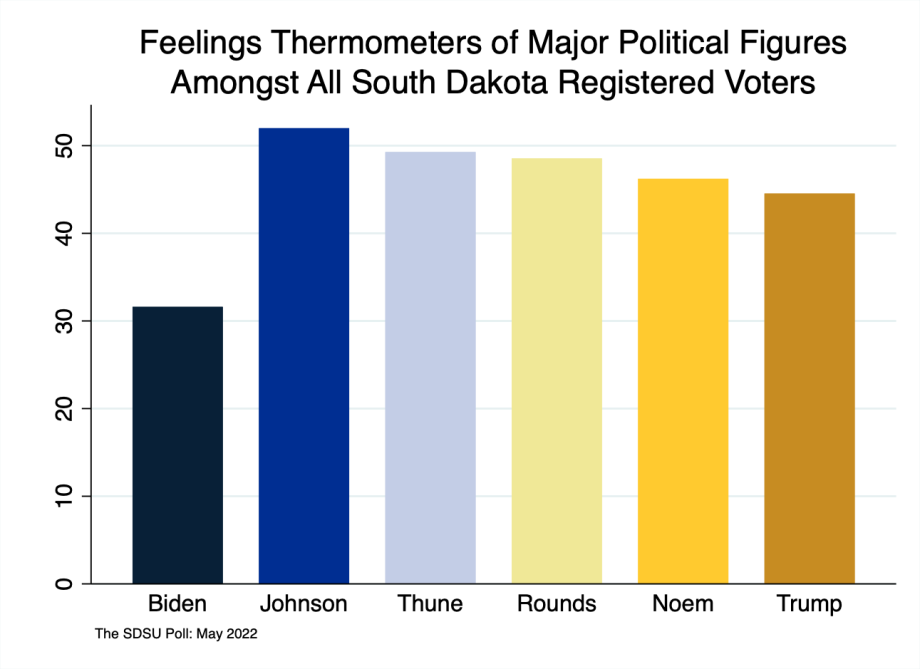 Given that South Dakota is a solidly Republican state and that every Republican seeking reelection is being challenged from within their own party, we also explore the support major political figures enjoy amongst Republican voters in the state. We found that the Governor and former President have the highest support. The thermometer rating of Kristi Noem is at 75. Donald Trump’s rating sits at 73.

The thermometer ratings of the Congressional delegation are about 10 points lower than Noem and Trump. Rounds, Thune, and Johnson are statistically indistinguishable from one another with scores of 63, 62, and 62, respectively. While these scores are slightly lower compared to our previous survey, they are virtually unchanged once you factor in the margin of error. Predictably, President Biden does not enjoy much support among South Dakota Republicans, and has a thermometer rating of 8. 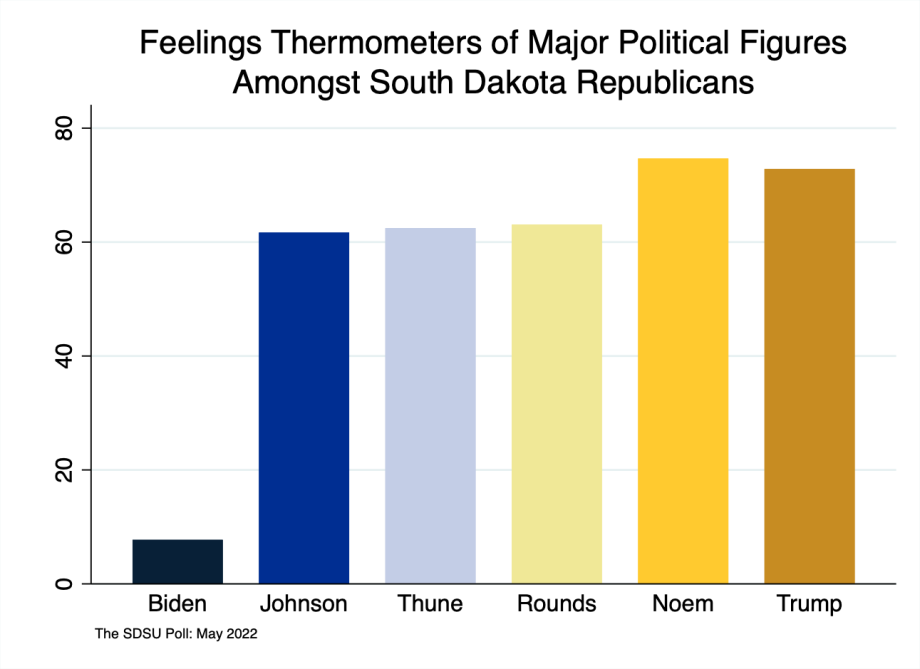 Over time we can see that the Governor continues to enjoy high support amongst South Dakota Republican voters. Her thermometer ratings are virtually unchanged since October 2020 when we conducted the first poll. The same can be said for President Trump. The Governor’s strong standing is largely based on her close affiliation with the former President who remains very popular among state Republicans and her solid relationship with the GOP’s new base of support.

There was a clear break in the Congressional delegation’s support amongst Republicans following the 2020 election. It is normal for voters’ partisanship to be activated by the general election and to rally behind their respective parties in the closing weeks of an election. Additionally, voters will often “drift” away from their candidates and partisan identification shortly thereafter.

Interestingly, this drift has been far more pronounced for the Congressional delegation that is much more “establishment” in orientation than the Governor who has embraced Trump’s base of support. Since October 2020, Representative Johnson’s thermometer rating dropped from 75 to 62. Senators Thune and Rounds saw similar albeit slightly smaller dips. The drop in thermometer ratings for Johnson and Thune could help explain the large number of undecided voters in both House and Senate primaries.

As we reported in the previous press release, 30% of voters are not sure about who they will vote for in the U.S. House primary, and nearly 41% haven’t decided who they will vote for in the Senate primary. In the Governor’s case, only 22% of likely primary voters are undecided. To us, this signals that the Republican party in South Dakota is moving decisively in Trump’s direction as we’ve seen in many other states across the country. 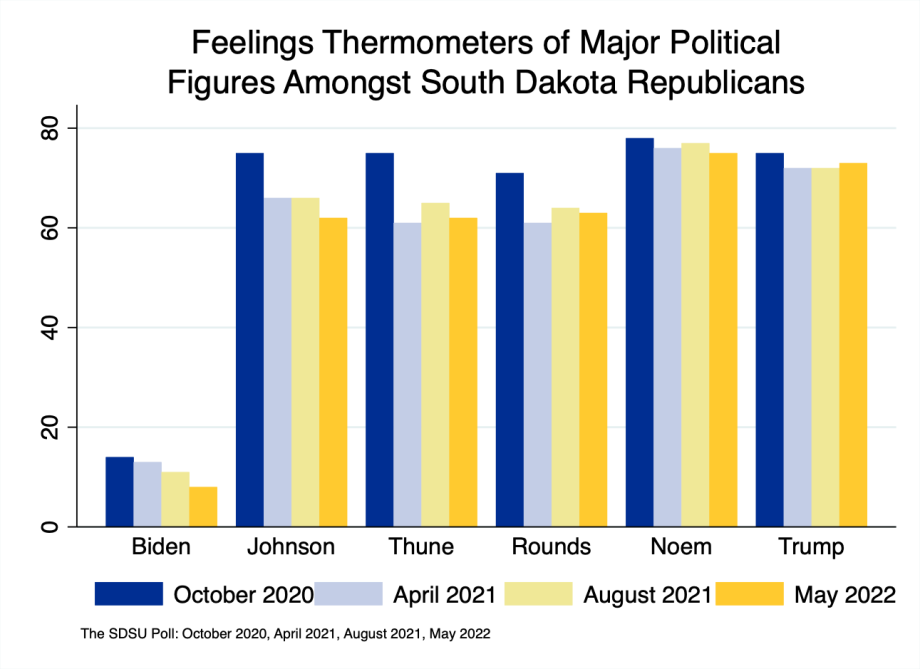 Unsurprisingly, Democrats in South Dakota have warmest feelings for President Biden. While his thermometer rating is the highest at 72, it is down 7 points compared to August 2021. These results are in line with national-level polling that has showed a general erosion in his approval rating.

The support for Congressional delegation is markedly lower among South Dakota Democrats. Johnson, Rounds, and Thune have scores of 40, 31, and 31, respectively, which are very similar to last year. Democrats remain very cool on both Governor Noem and President Trump, with ratings of 9 and 4, respectively. 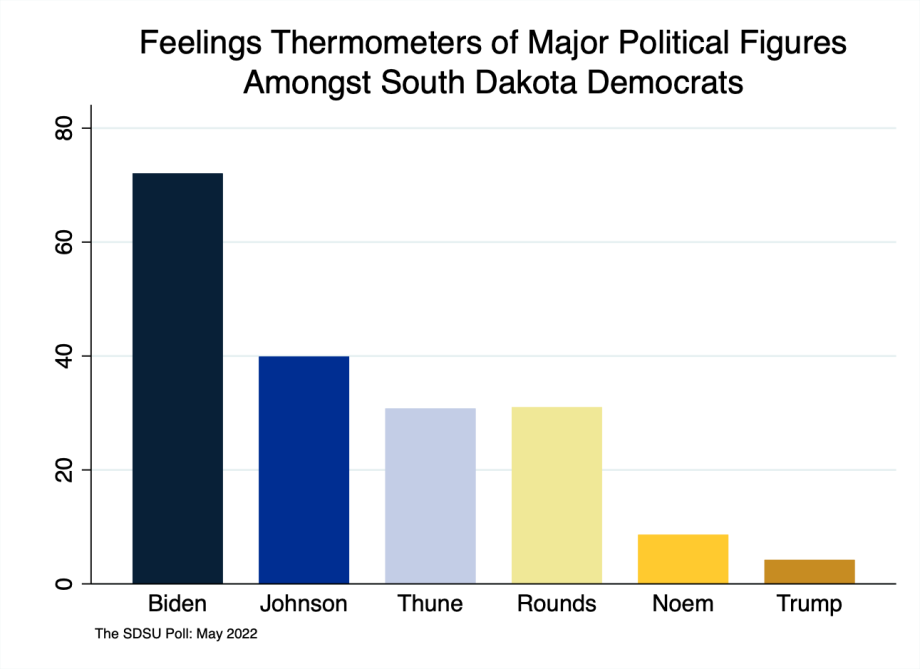