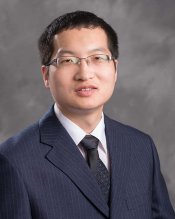 The two-year project runs through Feb. 29, 2024, and is titled “Advancing understanding of data-driven wildfire evacuation planning for communities with transient populations in the wildland-urban interface.” It is based on the results of two smaller research projects: the first funded by Truckee, California, in 2019-20, and the second by South Dakota State University in 2020-21.

Li is an assistant professor of Geographic Information Science in the Department of Geography and Geospatial Sciences at South Dakota State University.

Interest in evacuation planning was stimulated by the 2019 Camp Fire that almost totally erased the town of Paradise, California. Truckee is largely a tourist town near Lake Tahoe. In the first phase Li worked with the stakeholders in Truckee to develop a wildfire evacuation model to derive evacuation time estimates for the town of Truckee.

With the support from the SDSU Research, Scholarship and Creative Activity Challenge Fund, Li was able to continue to collaborate with the stakeholders in Truckee to develop a new evacuation model that can take into account occupancy type and the occupancy rate of secondary homes for in Tahoe Donner, where there are almost 6,000 homes and 70% of them are second homes.

That means occupancy rates vary by day of the week and the season. Clearly, the greater the occupancy rate and the higher the number of vehicles per residence, the longer it will take to evacuate a community.

“In the previous work, we used several assumptions, including the number of vehicles per residence, in the evacuation model. But in this new project, we will use email and mail surveys to collect evacuation logistics and behavior data to further improve the wildfire evacuation model.

“The new evacuation model will couple both fire spread and traffic simulation models and can take into account any wildfire spread scenario. ” Li said.

Li, who has been working in this field for 10 years, said his team will also work with collaborators in Truckee to examine how to leverage big data such as historical fire occurrence and weather data to design a series of evacuation scenarios to develop data-driven community wildfire evacuation plans.

While the study area is Tahoe Donner, Li said the evacuation model and the data-driven approach for evacuation planning could be used by evacuation researchers and practitioners for any community in the wildland-urban interface including the fire-prone communities in the Black Hills.

Because the coding for the evacuation model will be done by Li’s team, the end user will not need computer coding skills to use the model, he said.