As a part of the survey we also included questions on timely domestic and international issues. Russia’s unprovoked invasion of Ukraine that started on February 24th has been widely condemned by the international community. In early March, the United Nations General Assembly overwhelmingly adopted a resolution that demanded Russia to stop the invasion. On March 16th, the United Nations’ International Court of Justice ordered Russia to cease the invasion. We asked South Dakotans about their perceptions of the conflict.

We first asked if they believed Russia was justified in invading Ukraine. Over 86% South Dakotans “disagree” or “strongly disagree” with that assertion. As with most policy questions, we see some partisan differences in the intensity of this belief, though not as much as with many domestic issues. Over 90% of Democrats answered that they “strongly disagree” with the statement compared to 63% of Republicans. 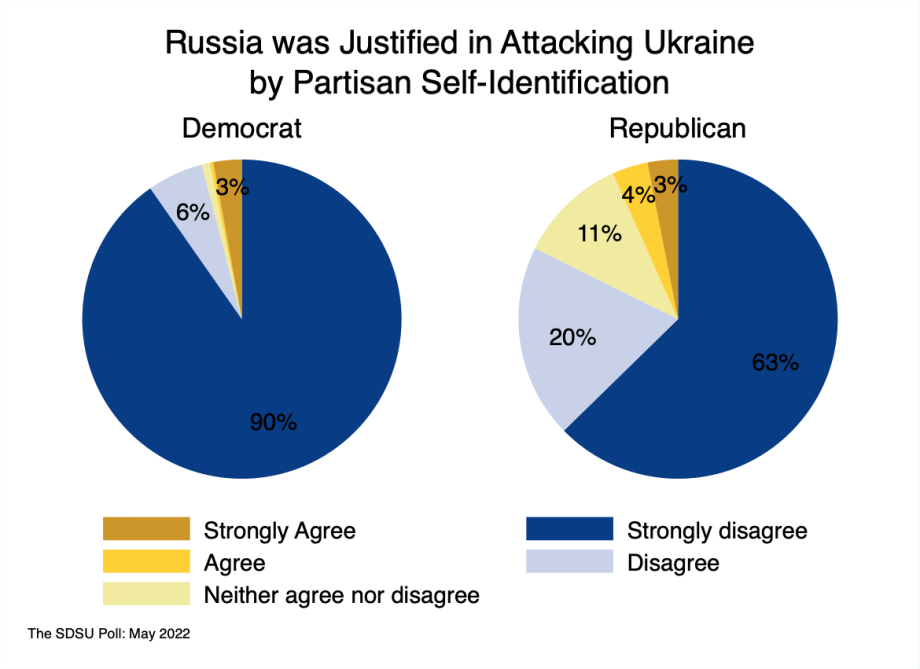 There have been some disturbing reports on how Russia has waged this war, and accusations of war crimes are mounting. Evidence has emerged of widespread abuse and killing of Ukraine citizens in the town of Bucha. Elsewhere, there are reports of Ukrainian women, men, and even children being raped by Russian troops. The International Criminal Court started an investigation into war crimes and crimes against humanity being committed by Russian troops. We asked South Dakotans about their perceptions of human rights violations perpetrated by the Russian troops in Ukraine. 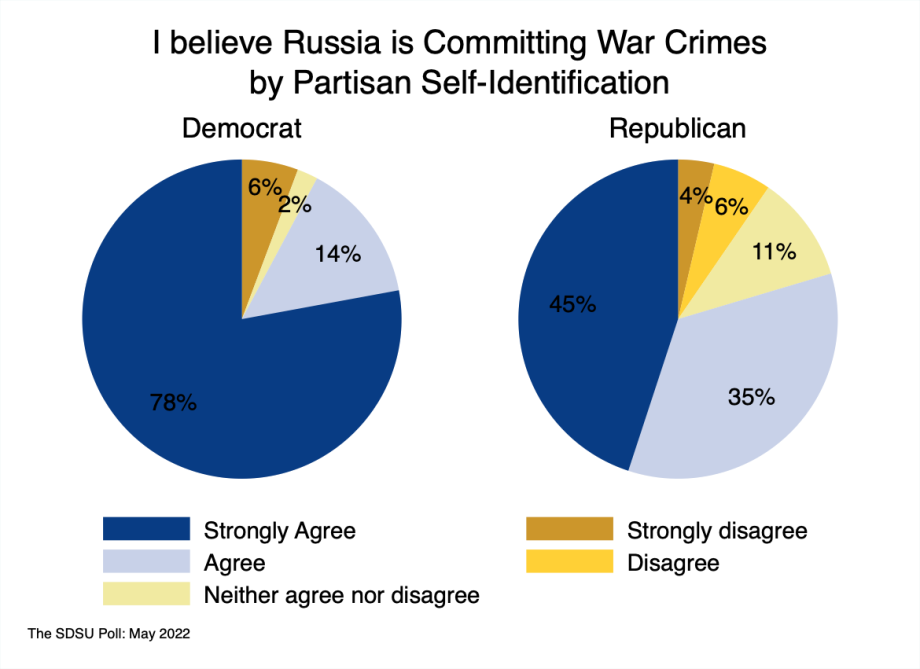 As a response to the Russian invasion of Ukraine, countries around the world have imposed sanctions on Russia, and are supporting Ukraine through military and economic aid. On May 10th, the US House of Representatives approved a $40 billion aid package for Ukraine. President Biden stated multiple times that the sanctions imposed by the United States on Russia will impact Americans. For example, gas prices have already increased since the invasion. We wanted to see how supportive South Dakotans are of sanctions against Russia, even if their consequences are felt at home. 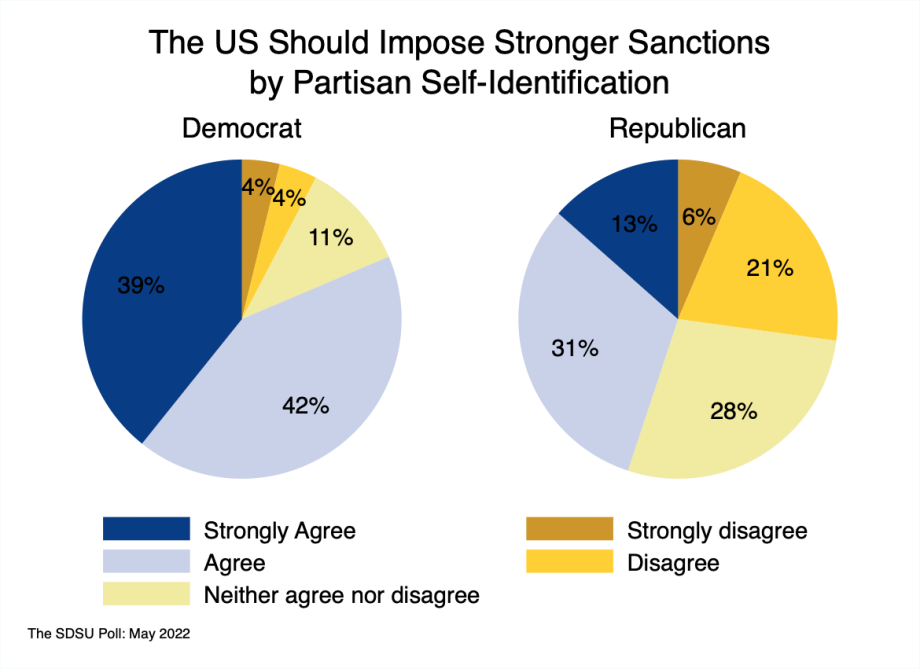 Overall, South Dakotans overwhelmingly believe that Russia’s invasion of Ukraine was unjustified. A large majority also believes that Russian troops are committing war crimes, and a slight majority of South Dakotans supports further sanctions even if they would lead to higher prices at home.

In the main, Democrats are far more unified in their opposition to Russia’s invasion of Ukraine. Part of this is the simple fact that they are taking and following cues from a Democratic president. It is also plausible that some Republicans are taking cues from the former President who remains very popular in Republican circles. Trump openly talks about his close relationship with President Putin. He also described Putin’s move to formally recognize the two separatist republics in eastern Ukraine and the movement of Russian troops into these regions as “smart,” “savvy,” and “genius.”

We now turn to the issue of transgender athletes, which has recently attracted nationwide attention and controversy. The success of the University of Pennsylvania’s transgender swimmer Lia Thomas in the NCAA Division I national championship this year put this issue at the center of public debate.

In February, Governor Noem signed a bill that prohibited transgender girls and college-age women from competing in school sports that match their gender identity. Similar bills have been recently passed in other Republican states. It was reported that conservative politicians across the country might be using this policy issue to build momentum prior to the November midterm elections. 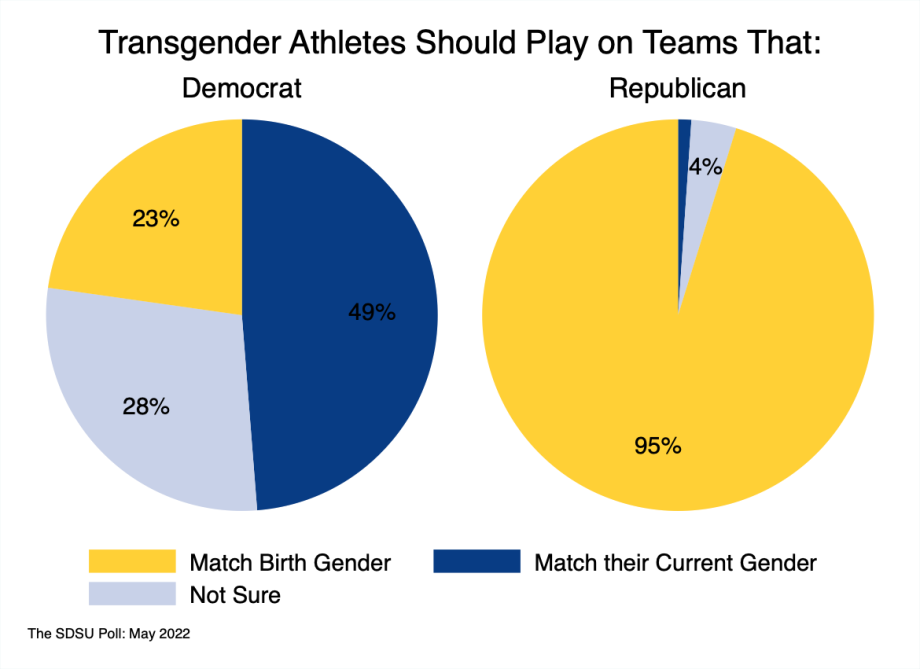 It is clear that the issue of transgender athletes has been politicized in South Dakota, similar to issues like COVID-19 vaccination, and we see significant differences between parties. Both Democrats and Republicans seem to be taking cues from their political parties, although Democrats seemingly to a lesser extent.