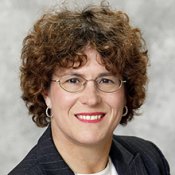 “I am so honored to be given the Distinguished Landscape Ecologist Award, the most prestigious honor bestowed by the International Association for Landscape Ecology – North America,” said Johnston, who started at SDSU in 2003 in the SDSU College of Agriculture, Food and Environmental Sciences’ Department of Natural Resource Management.

“My career paralleled the development of IALE. I attended the second annual U.S. Landscape Ecology Symposium in 1987, and I published a paper in the very first issue of our flagship journal, Landscape Ecology. Now, 35 years later, Landscape Ecology remains a vibrant and relevant discipline that is helping to guide ecological thinking and practice, and I am proud to be part of it,” she continued.

Johnston’s work has focused on the conversion of wetlands to croplands in the northern Great Plains. In a nomination letter, a colleague outlined that this work has helped to “shape and inform the policy dialogue around the Renewable Fuel Standard that the U.S. Environmental Protection Agency administers.”

Johnston served as president and vice president of the Society of Wetland Scientists and has been active with the Ecological Society of America.

She is a fellow of the Society of Wetland Scientists and has served on numerous committees of the U.S. National Academies, the National Science Foundation and the EPA.

Before starting at SDSU, Johnston worked with the National Science Foundation and was at the University of Minnesota-Duluth from 1985-2003 as a research associate, senior research associate and geographic information system administrator.