The South Dakota COVID-19 Family Impact Survey 2021 was conducted from July 31st to August 14th, 2021 by The SDSU Poll, a research group housed in the School of American and Global Studies at South Dakota State University. This survey builds upon similar surveys conducted by The SDSU Poll in October 2020 and April 2021. In this poll, a total of 573 registered voters in South Dakota completed our survey about the impact of the COVID-19 pandemic on their daily lives. The margin of error of this survey was +/- 4 %, on par with other state-wide polls. 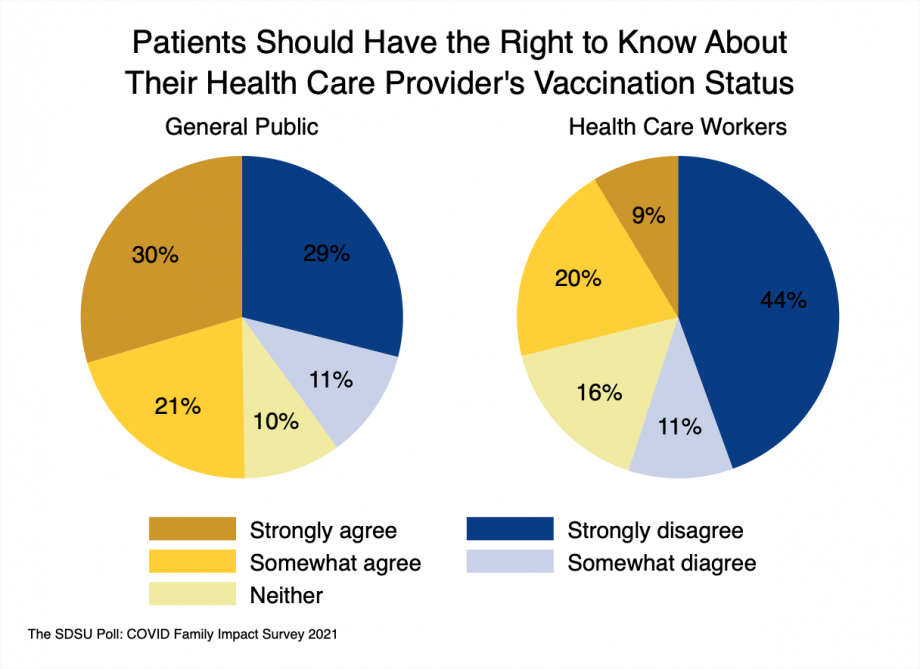 To a large degree, adherence to pharmaceutical and non-pharmaceutical measures to control the spread of COVID-19 is influenced by people’s political orientation. Indeed, politicization of this international health crisis is one of its defining features COVID response in the United States. Seven out of ten Democrats (73%) say they agree or strongly agree that patients should have the right to know their provider's vaccination status. Only 17% say they disagree or strongly disagree, while 11% say they neither agree nor disagree. As for Replications, three in ten (30%) say they agree or strongly agree, 59% say they disagree or strongly disagree, and 12% state that they neither agree nor disagree. Independents (not shown) basically split the difference between two parties. Overall, the support for a patient’s right to know the vaccination status of their provider is highly structured by partisan identification. 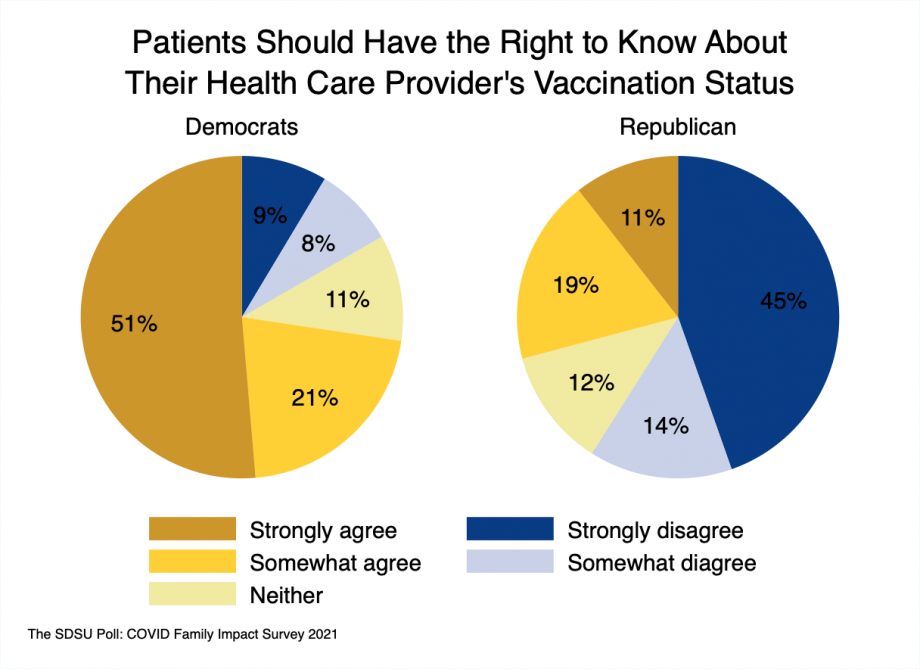 The rise of the highly contagious COVID-19 Delta variant coupled with vaccine hesitancy in the United States has prompted some businesses to require their employees - and sometimes their customers - to provide proof that they have been vaccinated. Some healthcare organizations and physicians in private practices also require proof of vaccination from patients and visitors for the sake of protecting healthcare providers and their patients. Some physicians even refuse to see unvaccinated patients. As of this writing, the Centers for Disease Control and Prevention (CDC) reports that 548,418 healthcare workers have been infected with COVID-19 and 1,749 have died. Critics argue that asking patients about their vaccination status is an invasion of their privacy, or it is a violation of the Health Insurance Portability and Accountability Act (HIPAA), though the latter is untrue. 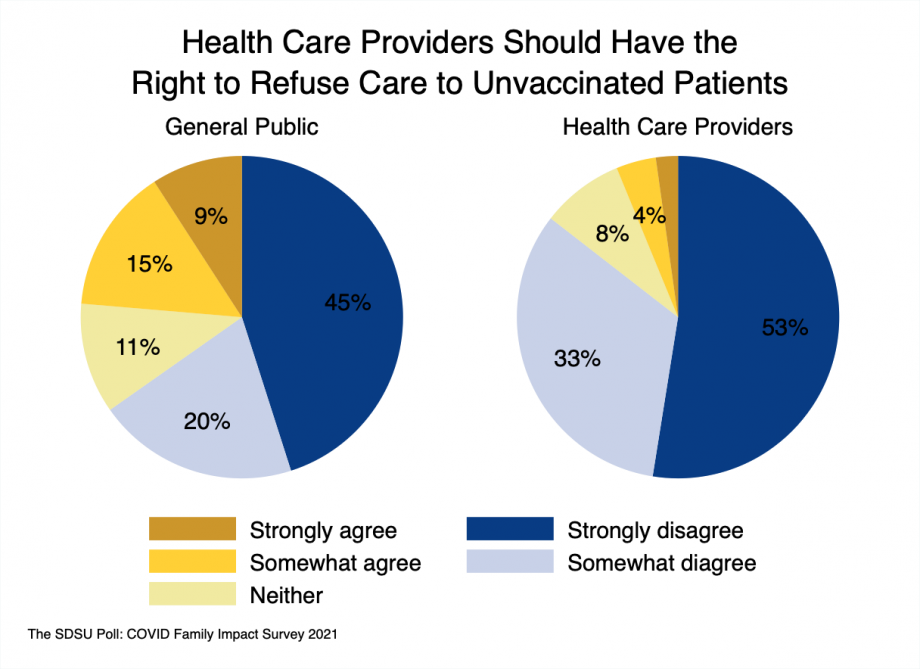 There is no doubt that political identification plays a major role in influencing Americans’ reactions to the COVID-19 pandemic. Analysis of the data shows that attitudes about health care providers’ right to refuse to see unvaccinated patients are strongly shaped by political affiliation. Nearly one in eight Republicans (78%), half of Democrats (52%), and 61% of Independents say they disagree or strongly disagree that healthcare providers should be given such a right. A smaller proportion of Republicans (10%) say they agree or strongly agree to allow healthcare providers to deny service to unvaccinated patients, compared to 33% of Democrats and 28% of Independents. Comparable percentages of Republicans (12%), Democrats (14%), and Independents (11%) say they neither agree nor disagree. Partisan identification evidently explains much of the differences in attitudes. 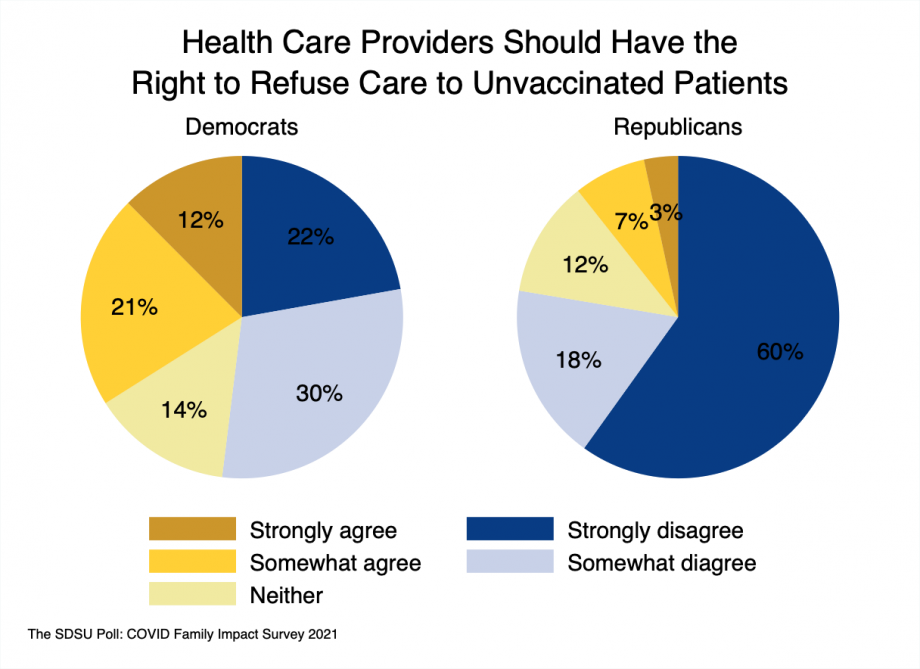 The take-away lesson, like most COVID-19 policy questions that we’ve dealt with in our surveys, is that partisanship remains one of the most robust determinants of people’s attitudes on most matters related to the pandemic. However, the public isn’t perfectly polarized on every COVID-19 policy matter, there are some policy areas where there is a fair amount of agreement. In coming press releases we will continue to look at a COVID related matters, including: the psychological effects on South Dakotans, conspiratorial beliefs people hold, and questions on mandatory vaccinations for certain groups.