The South Dakota COVID-19 Family Impact Survey 2021 was conducted from July 31st to August 14th, 2021 by The SDSU Poll, a research group housed in the School of American and Global Studies at South Dakota State University. This survey builds upon similar surveys conducted by The SDSU Poll in October 2020 and April 2021. In this poll, a total of 573 registered voters in South Dakota completed our survey about the impact of the COVID-19 pandemic on their daily lives. The margin of error of this survey was +/- 4 %, on par with other state-wide polls.

“Feelings Thermometers” are a commonly used and intuitive measure used by political scientists to measure support of a wide variety of subjects - including individual political leaders. A score of 0 indicates the coldest feelings towards the subject, 100 the warmest feelings, with 50 representing neutrality. The results of our latest survey are largely congruent with what we’d expect from a heavily Republican state like South Dakota. For reference, Donald Trump won just over 61% of the vote in both 2016 and 2020. President Biden’s thermometer rating is statistically unmoved since our last poll at 37, virtually the same as his take in the 2020 election here of 35.6%. President Trump’s rating is also unmoved from our previous polls at 42. We continue to see a gap between Representative Dusty Johnson and the other Republican office holders. Johnson’s rating is at 54, while Governor Noem (48), Senator Thune (48), and Senator Rounds (46) are statistically tied with one another several points behind. 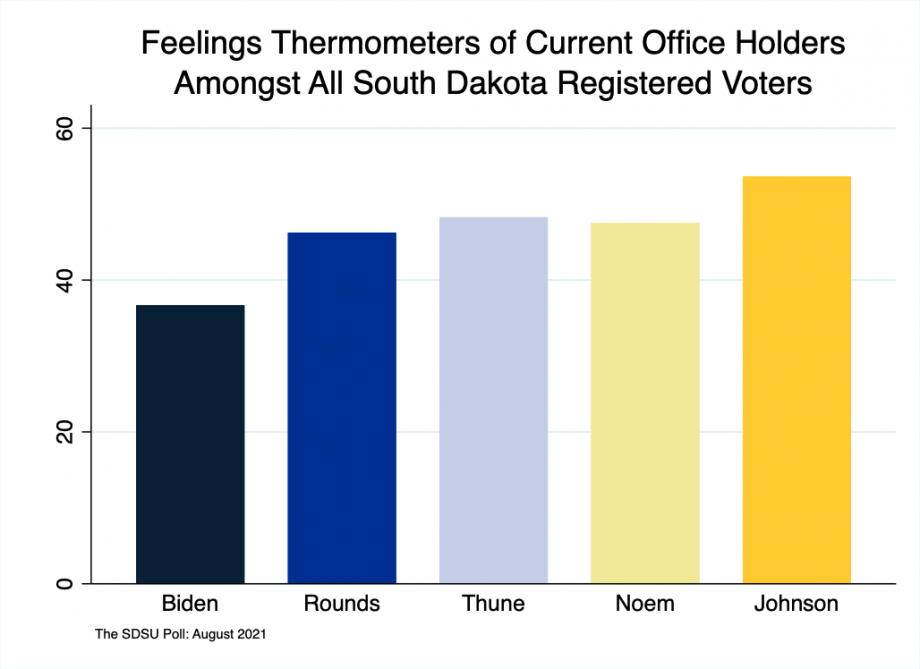 As a de facto single party state, most political competition of relevance takes place within the Republican party. Most threats to the electoral safety of our incumbents will likely come from their own ranks in the form of primary challenges. Research shows that Republican incumbent threat perception is focused on primary challenges from the right, whereas Democratic incumbent threat perception is from the center. As such, it is important to track support for incumbents within the party. Both President Trump and Governor Noem have maintained their popularity within Republican ranks, and receive the greatest support with thermometer scores of 77 and 72, respectively. This puts Noem a full 11 points above the congressional delegation. Johnson, Thune, and Rounds are statistically indistinguishable from one another with scores of 66, 65, and 64, respectively. Not surprisingly President Biden trails far behind with a rating of 11. 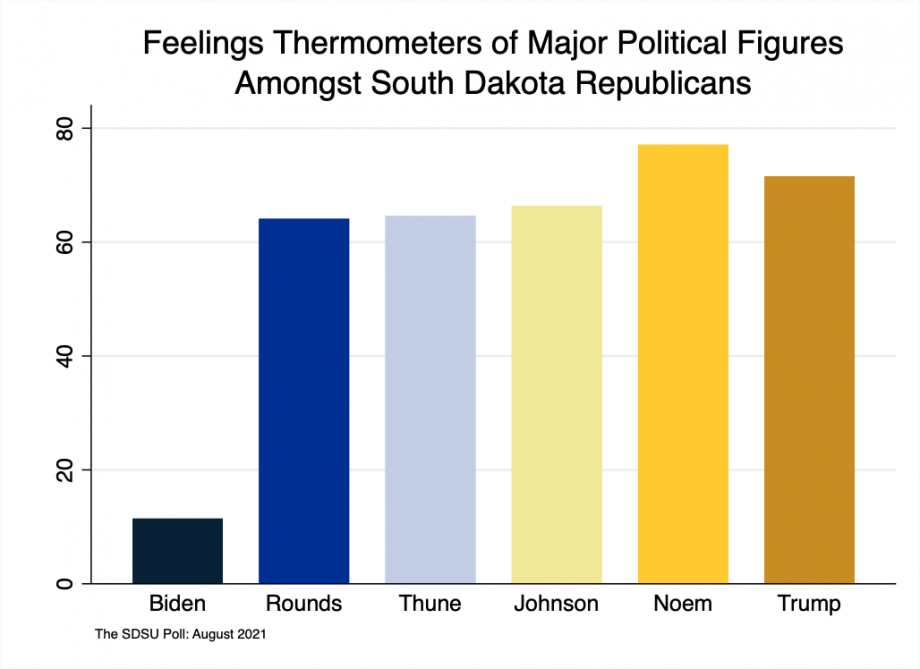 It is also useful to track the change of ratings for each office holder to get a sense of sentiments within the party. As is evident in the bar chart below, every figure is below their peak score from October 2020. Typically, in the midst of an election, people’s attention to politics is at its peak and their political identities are fully “awakened.” It is of no surprise that as they move on to other things in their lives after the election takes place, that their assessment of office holders goes down. What is of note here, is that this drop has not been uniform. The Congressional delegation’s score all went down sharply from October to April; and they have not recovered much in the interim. Trump’s scores also dropped, but not to the degree of the others. Meanwhile, Governor Noem’s ratings have scarcely changed over the course of last 10 months. This puts her in an excellent position entering the 2022 election year, with a primary challenge almost impossible to imagine. However, as Senator Thune’s election bid approaches, there are potential challenges coming from the right wing of the party, largely due to their public break with President Trump in the wake of the January 6th capitol insurrection. Though these challenges may ultimately prove unsuccessful, they are a clear sign of a dissatisfaction that our congressional delegation faces from the within Republican ranks that the governor may well be immune to. 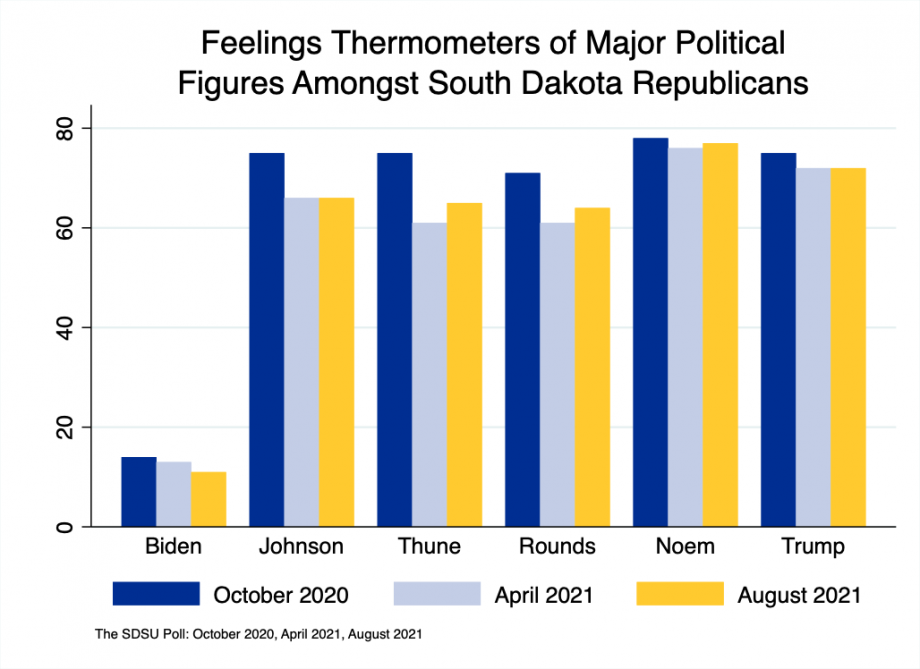 South Dakota Democrats are Cool to the Congressional Delegation, and Cold to the Governor

Democrats in South Dakota predictably show greatest support to President Biden with a score of 79 (on par with Noem’s ratings amongst Republicans) with their lowest marks going to Donald Trump at 6, and Governor Noem at 10. Dusty Johnson retains a rather strong rating of 38, while Senators Thune and Rounds trail at 30 and 26, respectively. The governor’s weakness is no doubt related to her much closer association with President Trump than we have seen from the congressional delegation since his decision to contest the election of 2020. 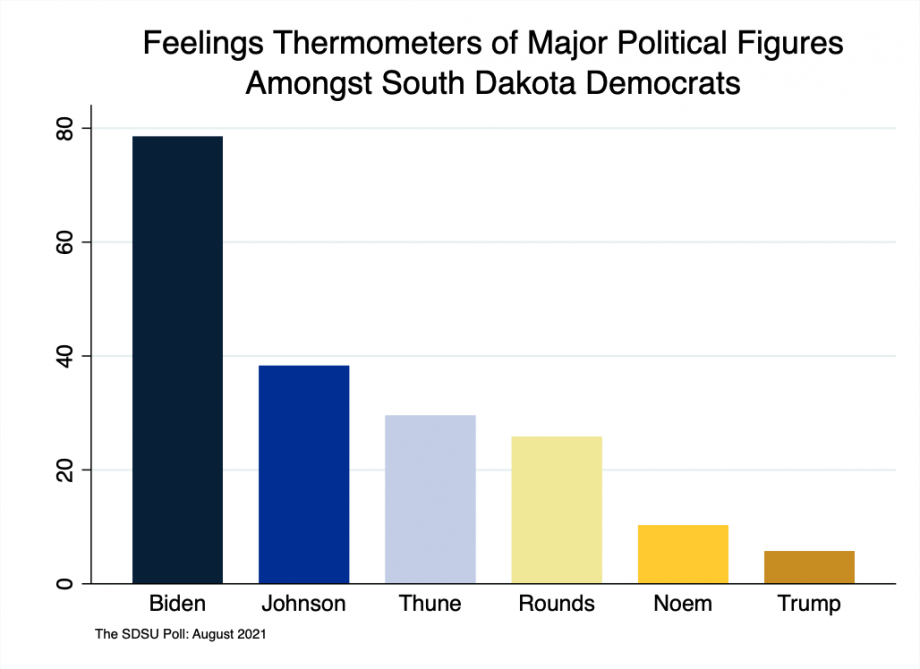 Self-described independents composed 26% of our sample, with 27% identifying as Democrats, and 47% as Republicans. Amongst those independents, about 39% “lean” towards the Republican Party and 30% lean towards the Democratic Party, leaving 26% of them truly neutral. In total, about 8% of the electorate are what we refer to as “true independents.” However, we treat all independents together since they do share the underlying trait of disassociating with either of the main political parties. Amongst independents, Dusty Johnson is the favorite with a mean rating of 49. Thune follows at 41, Rounds at 38, Noem at 34, and Trump at 30. Both Trump and Noem have lost significant ground amongst independents since our April poll. Interestingly enough, President Biden’s rating moved up to 37, edging out the governor and soundly beating out the former president. Though research has shown that independents are generally not the determining factor in an election, we still ought to pay careful attention to the preferences of this group since their collective voice could be decisive if they trend solidly towards a particular candidate or party. 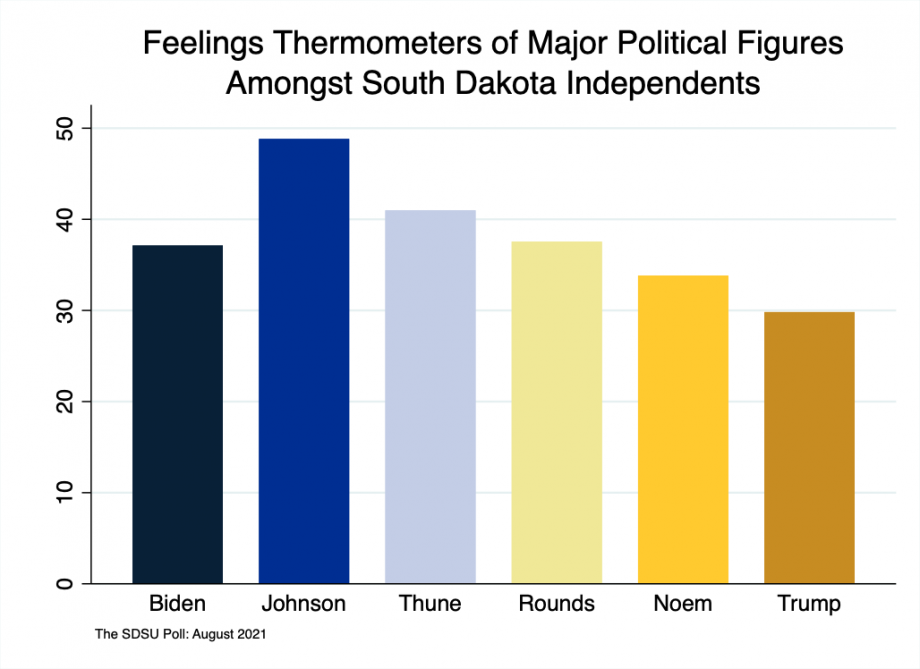