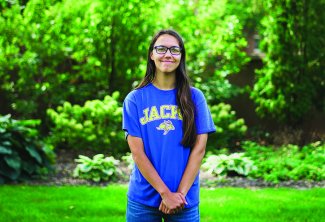 August means the start of a new fall semester at SDSU, and the Wokini Initiative is excited to welcome new and returning Wokini Scholars to campus! One Wokini Scholar, senior Paige Cain, is looking forward to beginning her final year as an undergraduate student.  A triple major in American Indian Studies, history and geography, Paige is a tribal descendant of the Flandreau Santee Sioux Tribe who grew up in Flandreau and has achieved much in her time at SDSU.

Both a Wokini and Honors College scholar, Paige has earned several national recognitions. In 2020, Paige was one of just four students nationally to receive the National Collegiate Honors Council Freddye T. Davy Scholarship for her work with SDSU’s Van D. and Barbara B. Fishback Honors College, which allowed her to attend the Upper Midwest Honors Conference. In 2021, she received another national recognition, an honorable mention from the Udall Foundation for her application for the Udall Undergraduate Scholarship, and was recently awarded TC Energy’s Indigenous Legacies scholarship for the 2021-22 school year.

According to Paige, a great deal of work goes into her applications for these honors, but she says they are worth the work. “It definitely helps having people help and review whenever you need it. People [at SDSU] are always willing to help.”

Paige began making SDSU her home while still in high school. She started college as a high school junior and senior, taking credits from SDSU as a dual-credit student. When she began touring college campuses, she had not planned that SDSU would be the university for her, but she took a tour and loved SDSU and the American Indian community. Though she visited other colleges in South Dakota, she never felt that she would fit ion those campuses. Paige says, “I came to SDSU, and I just absolutely loved it. Driving back home, I was grinning from ear to ear, and I knew that was the one. It felt more home to me.”

One of the most surprising things for Paige about her time at SDSU has been the opportunities she has received to conduct research as an undergraduate. According to Paige, “when I was a freshman, I came into college just wanting to get my degree and do my homework and everything like that, but now I’m actually the one creating the statistics and the data. I find that truly amazing because I’m doing my own research. There are a lot of questions that I have about certain topics, and it’s amazing that I can actually go in depth and research them because I know how after having my undergraduate degree.”

In addition to her academic efforts, Paige has involved herself in campus life through several clubs. As a member of the American Indian Student Association, she helped with Wacipi and Indian taco fundraisers. She has served as secretary for both Phi Alpha Theta, a history honors society which requires a 3.5 GPA and completion of at least 12 credits of history coursework for membership, and American Indian Science and Engineering Society.

For her senior year at SDSU, Paige has changed her education major to geography, so most of classes will be online, but she still plans to be on campus and to continue working at the library and as an ambassador for admissions. She is also looking forward to traveling with AISES in September to Phoenix to attend a national conference. After graduation, Paige hopes to work in a tribal community, hopefully Flandreau, and would love to someday work as a tribal education director or in research and develop programs to support Native American students, though she notes that she is still deciding on her plans.

As for what Wokini has meant for American Indian students at SDSU, Paige says, “I’ve seen [Wokini] really impact students.  I know a lot of students have jobs through Wokini grants. I’ve been on four or five Wokini grants myself and have seen other students be on Wokini grants.” According to Paige, those salaries make it possible to stay in Brookings instead of looking for work elsewhere during the summer.

Paige states, “it has really impacted the Native American community, and I believe retention rates are higher because of it because there is backbone and support that is right behind the Native American students because of Wokini because you basically know if you every need anything, whether it’s a computer or help in some other form, help will be there for you.”

To future and current Wokini Scholars, Paige advises, “keep on going. You might not be sure what your plan is, but just start and see where it takes you. Because I was so with the flow, I found other things that I absolutely loved. I love American Indian Studies; I love my major. If I hadn’t been open to it, I wouldn’t be a major today. So I always tell students, remember to be open.  You may not like it at first, but you may find something you absolutely love.”