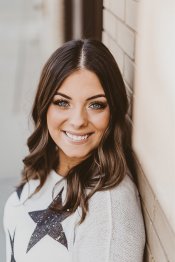 Students were selected based on academic performance, leadership in school and their community, work experience and a character essay. The 2021 recipients are planning to study subjects ranging from computer science and engineering to global health and public policy.

Since 1981, the Henkel Corporation Scholarship Program has provided financial support to the children of employees in North America. Henkel has awarded more than $2.5 million in scholarships to over 800 students.

Schultz’s father, Todd, is a manufacturing planner with the Henkel Company.

A 2021 Sioux Falls Washington High School graduate, she is planning to major in electrical engineering and minor in Spanish and biomedical engineering.

“I’ve always been interested in engineering. I really like math and science, and I’ve worked at the Avera Heart Hospital for three years,” said Schultz, explaining her academic selections. “I always thought it would be really interesting to be part of the medical field through biomedical engineering and be able to create the equipment that’s going to drive the medical field. Medicine is always changing and evolving, I really want to be a part of that.

“It means the world to me to be chosen for the scholarship,” said Schultz, who also received a scholarship from the Davenport, Evans, Hurwitz & Smith Law Firm through the Sioux Falls Area Community Foundation. “The financial help is greatly appreciated, but it’s also an honor because of the competitiveness of the Henkel scholarship. The caliber of the students who apply and some of the schools that the other students were accepted into were extremely impressive. It was so cool to be accepted among those other really smart kids. I’m also really proud to be given a scholarship from a really outstanding business. It means a lot to be able to bring honor to my dad and his co-workers. They were all sending emails to him saying congrats. That was really fun for us to see.”

The scholarship is renewable for three years, based on maintaining satisfactory academic performance as a full-time undergraduate student.

“I was very happy to hear Sydney has been selected by Henkel Corporation Scholarship Program and the newly established Henkel Diversity Scholarship Program as one of the 35 recipients across the nation,” said Sid Suryanarayanan, who leads SDSU’s Department of Electrical Engineering and Computer Science. “I am hopeful that diversity scholarships will encourage, retain and enable our underrepresented groups of students in STEM toward successful completion of their studies and a fruitful career.”

“I definitely chose SDSU because of the overwhelming acceptance I felt by both the campus and the people,” Schultz said. “I grew up spending a lot of time at SDSU. We had season tickets to football and lot of family and friends were there. The atmosphere was just always really positive, inviting and fun.

“I also just thought the success of the academic programs and the opportunities offered at SDSU made my decision super easy,” she continued. “I got in contact with the advisers and a lot of people within the electrical engineering program, and they were awesome. It was just a really easy choice after that.”

Schultz knows it will not be easy balancing her academics and continuing to work occasional weekends at the Avera Heart Hospital, but she’s up to the task. And she plans to help prepare the next generation of students.

“I provide tutoring, for two 6 and 10-year-old boys, with Bright Zone: In Home Tutoring,” Schultz said. “I was involved in a peer tutoring program at Washington that helps incoming freshmen, and it’s always been something I’ve really been interested in. I loved getting to work with the most amazing Algebra I teacher, Mr. (J.J.) Heyden, who wrote my Henkel recommendation letter, and the students as they worked throughout the year. I saw an ad on Facebook and got connected with Bright Zone, which is owned by a family friend. I then met with the family, and they agreed to let me work with their boys through the school year and summer. It’s been a lot of fun and a really great opportunity. It’s really nice to see them grow and become more confident in their learning.”

Which Schultz also gets to do, thanks to the Henkel scholarship.