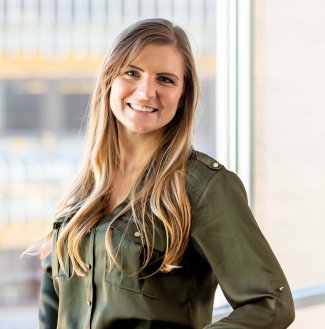 Paris Marcy, a South Dakota State University senior from Minnetonka, Minnesota, is one of six nationwide to receive a student leadership award from the nation’s leading civil engineering organization.

Marcy, a civil and environmental engineering major, was notified in a July 23 letter that she had been selected as a 2021 Student Leadership Award winner by the American Society of Civil Engineers, which has student chapters in all 50 states and 24 foreign countries in addition to 155,000 professional engineering members worldwide.

She is the first SDSU student to win the award since 2013, when Mo Phifer was honored. Jordan Twedt received honorable mention in 2019.

Marcy’s nomination was supported by Zach Gutzmer, adviser for the SDSU chapter of the American Society of Civil Engineers, and Nadim Wehbe, head of the Department of Civil and Environmental Engineering in the Jerome J. Lohr College of Engineering.

Gutzmer, who will be starting his 13th year on the faculty and his 10th as adviser, wrote, “Paris is one of the most committed, hardest working and focused students I have had. She is dedicated to civil engineering and seizes every chance for leadership growth in ASCE. Paris is a role model because she leads by example and isn’t afraid of a challenge.”

Marcy had plenty of challenges when elected chapter president at the end of fall semester 2020.

Gutzmer observed, “Despite our university’s COVID-19 restrictions, which severely limited what we could do as a large group, Paris still set up achievable goals for the student chapter to pursue this year while following the safety guidelines. There were several times this (spring) semester when I thought it would be best to cancel certain events, but Paris convinced me she could find a way to still have the event.

“I have been extremely impressed with her commitment and creativity to find solutions to keep ASCE moving forward. We were able to have a successful, but limited, semester and received the 2020 ASCE Region 7 Outstanding Student Chapter award for a second-straight year. I credit the award unequivocally to Paris.

“Her positive attitude and motivation were a compass for the officer team.”

In addition to her role as president, Gutzmer said Marcy is “a hardworking, driven, dedicated student” who also was hired as a homework grader for him in 2020-21. “She has always done superb grading work for me while keeping deadlines and communicating with me. I have been very impressed with how she balances her workload, commitments and time.”

Wehbe wrote, “I have witnessed Paris evolve into one of the most impactful student leaders our program has seen in many years.”

He noted, “Paris spearheaded an initiative that engaged the CE department’s administration and industry advisory board to establish the first student professional mentorship program in the department’s history. The program aims to engage students with the latest developments in the civil engineering practice by pairing them with practitioners in their technical areas of interest. The program launched in spring 2021 to a great success.

“Paris is a mover and shaker who will undoubtedly continue to assume leadership roles in her future professional career.”

Marcy will graduate in May 2023 and plans a career in structural engineering.