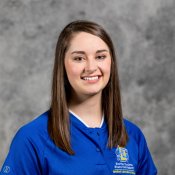 As a scientist, Kailee Genant had to make sure the answer she received was real.

A senior-to-be at South Dakota State University, she read the email one more time to verify she was receiving an Alpha Mu Tau Fraternity national endowed scholarship. After reading it again, Genant realized she received the fraternity’s Martha Winstead Memorial Scholarship. The medical laboratory science major can use the funds to help with various costs for the academic year.

Genant chose MLS because she wanted to work in health care but did not want to be at the forefront of care with patients. As a result, the self-described science nerd fell in love with the idea of working in the laboratory and being able to help doctors determine methods of treatment and diagnose patients.

“I think that part of the reason why I really like MLS is because it's a little more in the background of things,” she said. “People don't really realize how important we are in health care. We are the backbone of health care because without our test results, doctors can't move forward with treatment for patients without guessing.”

Genant, a Parkston native, was able to see the impact of her results firsthand while spending three weeks of her summer vacation in Chamberlain as part of the Rural Experiences for Health Professions Students program.

“By going to Chamberlain, it kind of solidified what I want to do and where I want to work someday or hopefully, I'll get to work someday,” she said. “COVID-19 showed me that you never know what's going to happen tomorrow, but I really hope to be working in rural health care someday, making an impact on communities in South Dakota.

“Rural health care in South Dakota needs a lot of health care professionals right now,” Genant continued. “I love the community feel that you get in that space and you get to know your patients a little more. And by working in the lab, you really get to do a little bit of everything each day. Whereas in a bigger hospital, you'd probably be on the same bench doing the same thing all day with no patient interaction.”

While it was busy and more involved, she’d prefer to work in rural health care.

“I grew up in a small town and I would love to go back close to where I call home,” she said. “A lot of the people who go to rural health care settings have to wear a lot of hats. While rural health care might be smaller, for example, a place like Chamberlain is the only place between Sioux Falls and Rapid City on the interstate. It gets the interstate traffic, some reservation traffic and it covers three counties so the ER is busy. You do hospital stuff, clinic stuff, in-patient stuff … literally everything you can think of.

“I think putting that on a resume is amazing, but even better are the experiences and relationships you build while you are serving others in that small community,” Genant continued. “Rural health care is truly a one-of-a-kind experience, constantly giving back to the community you are serving.”

Hoping to have a future medical career is something she shares with her husband, Wes. He is the starting center on the 2021 Jackrabbits’ football team and was named to the CoSIDA Academic All-America Division I Team for the third time in 2021. He carries a 3.89 GPA as a biochemistry and pre-medicine major.

Wes’ presence at SDSU was one of the reasons Kailee enrolled, but not the only.

“The biggest reason why I wanted to go to SDSU was my Junior Day visit. I had gone to a few other schools, but SDSU was the only one that felt like home and was within driving distance of my family,” she said, adding that her dad (Kurt ’92) and brothers are SDSU alumni.

“While it doesn’t have to do with my major, it’s been good to learn something new, and I love my coworkers,” she said. “Working my way through school hasn’t been easy. The MLS program isn’t easy either. The scholarship has provided some relief as it’s hard to try to work and study.”

Despite those commitments, Genant is the MLS Club secretary/treasurer and she volunteers to help other students and meet with prospective students.

Genant credits that work ethic to her parents, Kurt and Melissa.

“I wouldn’t be where I am today without them. They always told us to just try our best in everything we do and are part of the reason why I applied for the scholarship in the first place,” she said, noting her father farms and her mother teaches high school mathematics. “I’ve seen how hard my parents have both worked to get us kids the best education and opportunities possible.”

And part of that work has earned Genant a national scholarship.