The South Dakota COVID-19 Impact Survey was conducted from April 12-25, 2021 by The SDSU Poll, a research group housed in the School of American and Global Studies at South Dakota State University. A total of 3,057 registered voters in South Dakota completed our survey about the impact of the COVID-19 pandemic on their daily lives, alongside questions on political beliefs given the partisan polarization of the policy response to the pandemic. The margin of error of this survey was +/- 2 %, which is less than most state-wide polls.

Scientists agree that vaccination is the best way to beat the pandemic and have life return to normal. South Dakota has had some of the highest vaccination rates nationwide, with 55% having received at least one dose of the vaccine. However, the pace of vaccination has slowed down in South Dakota, as well as in other states. Vaccine is going unused in places and vaccination centers have been closing around the country due to a lack of interest. Some groups, such as Evangelical Christians, appear to be particularly unwilling to receive the vaccine. For all these reasons, medical experts and policymakers in South Dakota are concerned that vaccine hesitancy could prolong the pandemic in the state, even preventing herd immunity altogether.

Understanding why people are unwilling to get vaccinated and how to most effectively encourage them to do so is therefore a crucial task. Well-crafted messages from respected doctors, religious, and political leaders in their communities are needed. A study conducted in March found that the key to convincing people who are hesitant about vaccination, such as Republicans who voted for Donald Trump, were more likely to be influenced by their doctor than by a politician. Our goal at The SDSU Poll was to identify South Dakotans that have not been vaccinated and see what types of messengers were most effective in promoting vaccination.

Who Are the Non-Vaccinated South Dakotans?

The results of our survey show that Democrats are far more likely to get vaccinated than South Dakota Republicans; 81% of Democrats surveyed already got the vaccine, compared to only 39% of Republicans, and 43% of Independents. Of those South Dakotans who identify as Evangelical or born again Christians, only 37% received the vaccine. 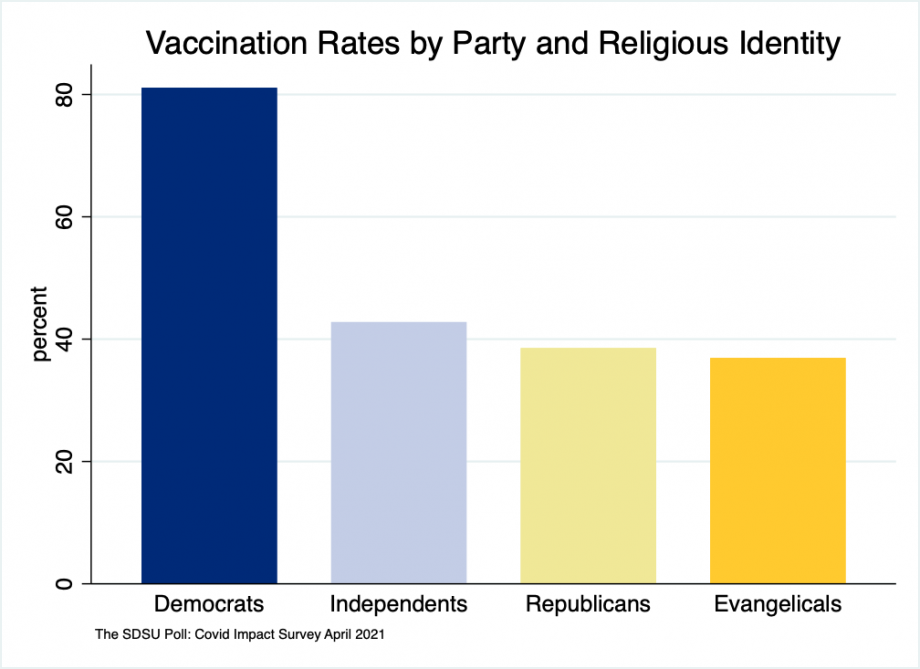 Will Non-Vaccinated South Dakotans Get the Jab? 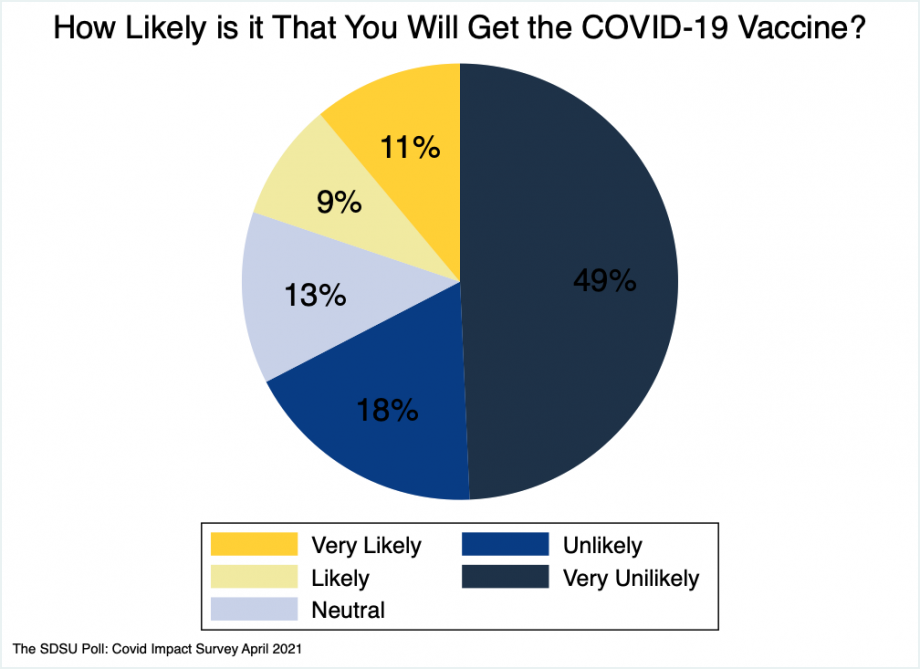 In our previous survey in October 2020, we asked South Dakotans about their vaccination plans. At that time, 14% reported that they “definitely won’t” and 10% “probably won’t” get vaccinated. At that time the most common reasons given were the concern about the side effects of the vaccine and lack of concern about getting sick. Six months later, people are still concerned about the side effects, but seem to be more concerned about the unknown risks due to the vaccine being too new. In addition, many people are not worried about getting seriously ill. 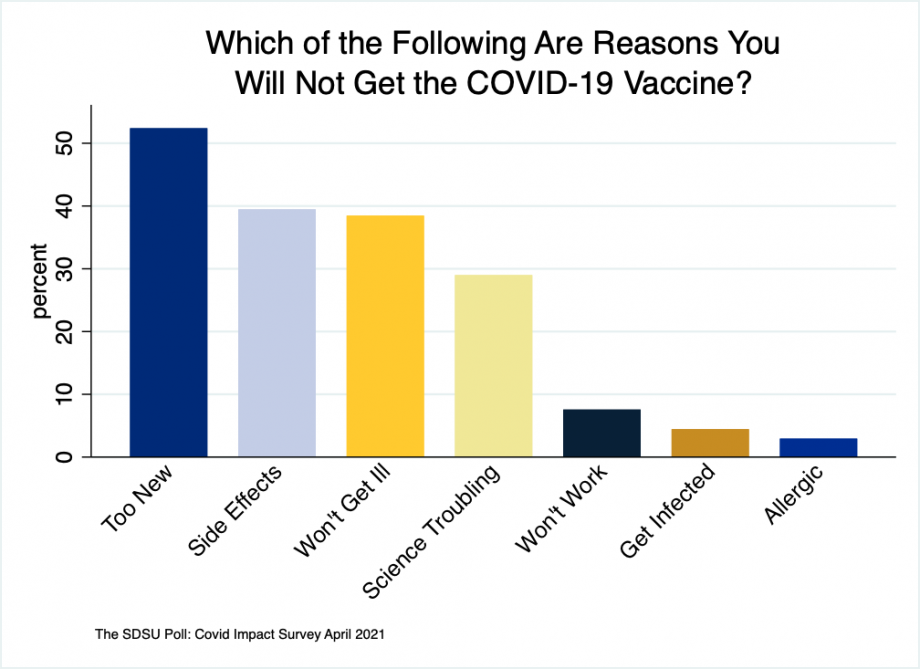 How to Motivate South Dakotans to Get Vaccinated?

A goal of The SDSU Poll is not only to understand the reasons of vaccine hesitancy, but also to explore how policy makers might motivate the unvaccinated to roll up their sleeve. The challenge for public health officials is to increase the confidence and trust of South Dakotans in vaccines in a highly politicized and polarized environment. Communicating and messaging is key in making people more likely to get vaccinated.  The message must come from a trusted messenger, someone whose advice citizens will follow. If the vaccine is endorsed by someone trusted in the community, particularly someone who has not been caught up in the political melee, then working through that messenger might be a more effective way to convince people to get vaccinated than politicians debating it like a political matter.

In what is referred to as a “survey experiment” in research circles, our participants who indicated that they had not received a vaccine were presented with identical messages urging and endorsing vaccination from different messengers: a political, religious, or medical figure from South Dakota. For the sake of scientific validity, one group read a message that was unrelated to COVID-19 vaccination, in what researchers call a control group (just like a placebo in a clinical trial). After this “treatment,” participants were asked how likely they are to receive a vaccination. 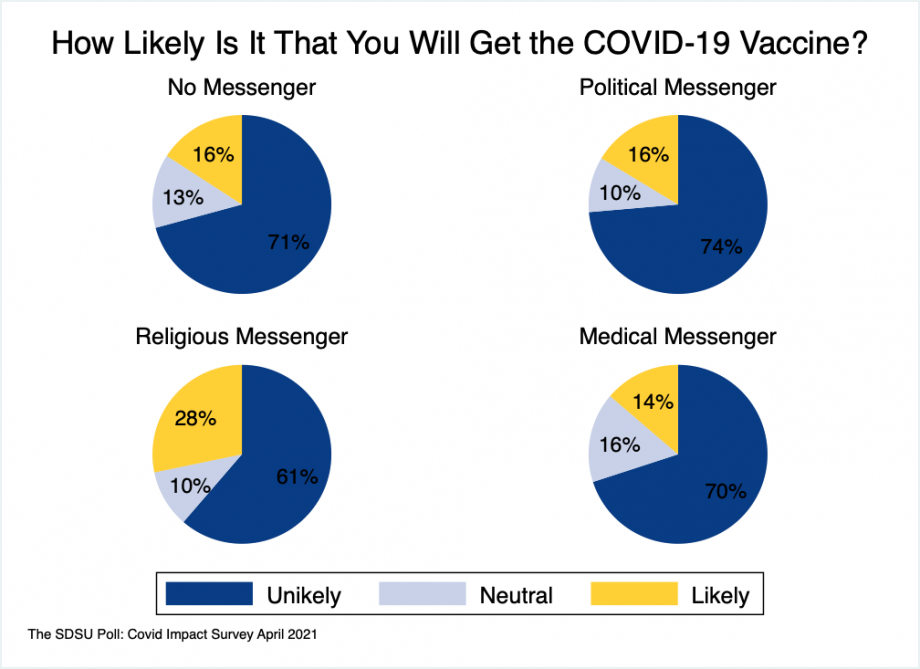 Overall, the findings support one of our general expectations. In our control group, 16% of participants indicated that they are “somewhat” or “very likely” to get vaccinated. This establishes a basis of comparison. We found statistically similar numbers in the two groups that read the message from a medical professional and a political messenger. However, respondents who read the message from a religious leader indicated nearly twice the likelihood of getting vaccinated (28%) than those hearing the other messengers. More analysis needs to be done, but this strongly suggests that religious leaders are the most effective messengers of the three we tested. This may be especially important to note given that Evangelical Christians have the lowest rates of vaccination or even interest in getting a vaccine as described earlier. If public health officials wish to make inroads within the Evangelical community, they’d be well served to coordinate their efforts with religious leaders. Clearly, the messenger matters. These results confirm findings from other surveys stating people do not want COVID-19 information from politicians. What is of particular interest is that doctors as messengers were as ineffective as political messengers. We suspect the politicization of COVID-19 mitigation efforts have soured people to medical experts and their opinions as well.

In a press release coming Thursday May 6, we will present results from a similar survey experiment amongst South Dakotans who have been vaccinated. Those individuals were tested on whether the messenger matters in shaping COVID-19 mitigation practices, such as mask wearing and distancing, after they received the vaccine.